Big upsets in the Big Apple 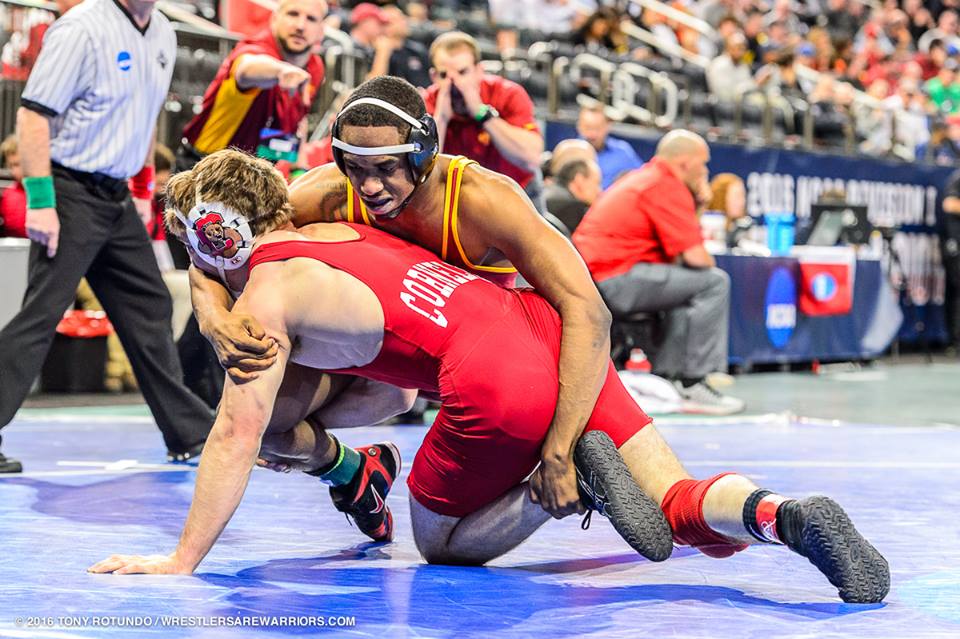 One of the biggest upsets of the day came from Iowa State’s 174-pounder, Lelund Weatherspoon, who defeated Cornell’s No.2-seed Brian Realbuto, 7-4. Weatherspoon had a one point lead in the final period before taking Realbuto down with 30 seconds left to secure his victory.

Weatherspoon advanced to the quarterfinals, after defeating Army’s Brian Harvey, 3-2. He’ll face No.7 Cody Walters of Ohio and hope to continue his streak of upsets.

The Cyclones 197-pounder, Pat Downey, also picked up an upset for himself. Downey defeated No.11 Phil Wellington of Ohio in overtime, 3-1. Downey wasn’t quite done yet though. The unseeded Cyclone was trailing in overtime against Virginia Tech’s No.6 Jared Haught, 2-1, before escaping and throwing Haught to his back and pinning him with less than 20 seconds remaining in the match.

“As the match goes on and you’re in a scramble like that as coach said ‘you just have to create wrestling positions’,” Downey said. “I see that he’s on a seatbelt, I’m not really trying to go another overtime so I went for it and it worked out.”

Iowa’s 174-pounder No.13 Alex Meyer was unfortunately on the other end of spectrum. Meyer was upset in the first round by Lehigh’s Gordon Wolf, 10-9. Meyer would bounce back in the consolation round, pulling off an upset of his own. He defeated returning All-American, Ethan Ramos of North Carolina, 5-0.

It was business as usual for University of Iowa wrestlers, Thomas Gilman (125), Cory Clark (133), and Brandon Sorenson (149). All three advanced to the quarterfinals in dominating fashion.

Gilman started his day with a tech fall over Central Michigan’s Brent Fleetwood. In the second round Gilman defeated Big 10 foe, Tim Lambert of Nebraska, 12-4.

“I’m here for business. It’s New York City, I’m going to work just like everyone else in this town,” Gilman said.

Clark cruised in the first round, beating Utah Valley’s Jade Rauser, 8-0. He would be tested in the second round by UNI’s Josh Alber. Clark managed to score two takedowns in the match that would help him outlast Alber, winning 6-2.

Clark will face Nebraska’s Eric Montoya. Albers will wrestle in the second round consolation match Friday at 133 pounds.

Sorenson won both of his matches by decision including a 3-1 victory over Bucknell’s Victor Lopez to advance to the quarterfinals.

184-pounder Sammy Brooks and 197-pounder Nathan Burak will be joining their Hawkeye teammates in the quarterfinals Friday, after both wrestlers went 2-0 on Thursday.

The Hawkeyes 157-poounder Edwin Cooper won his first match but was pinned by Kent St’s No.4 Ian Miller. Cooper will wrestle in second round on the consolation side of the bracket on Friday morning.

Iowa’s 165-pounder Patrick Rhoads and heavyweight Sam Stoll were eliminated from the tournament, going 0-2. Stoll was forced to injury default both of his matches due to a knee injury.

UNI’s 125-pounder Dylan Peters sought revenge in his second round match against Missouri’s Barlow McGhee. McGhee defeated Peters in the MAC tournament finals two weeks ago. In overtime, Peters had a one-point lead with 10 seconds left but gave up a takedown to McGhee as time inspired. But the Panthers head coach, Doug Schwab, would challenge the call, saying McGhee grabbed Peter’s leg brace in order to get the final takedown. After video review, officials confirmed that McGhee did indeed grab the leg brace, which would wave off McGhees takedown and send Peters to the quarterfinals. He will face returning national champion Nathan Tomasello of Ohio St.

“We found a way to win and stuck to the game plan,” Schwab said.

The Panthers Andrew Steiert would follow the trend of upsets at 157-pounds. He defeated Central Michigan’s No.11 Luke Smith, 4-1. But the upset mojo would not last long for Steiert, he was defeated by No.6 Joe Smith of Oklahoma State, 4-1, the following round. He will compete in the second consolation round.

165-pounder Cooper Moore was pinned first round by Virginia Tech’s David McFadden and was eliminated after losing his second match to Kent St’s Tyler Buckwalter.

One thought on “Big upsets in the Big Apple”