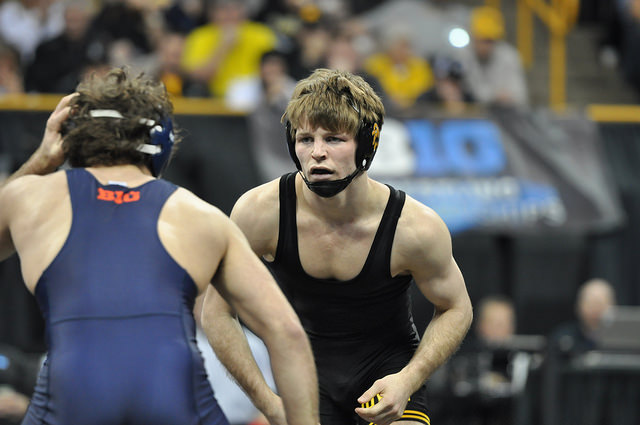 Gilman should have little trouble in round one and two. First he will have Brent Fleetwood of Central Michigan then he should have a rematch of the Big Ten third place bout against Tim Lambert of Nebraska. Gilman has seven and eight point victories over Lambert this year already.

Dylan Peters finds himself in an interesting situation in the bracket. His first two matches should be against the last two guys he wrestled at the MAC conference tournament. First up will be Shakur Laney of Ohio, who Peters beat 9-5. Should he win that it will be a MAC finals rematch against Barlow McGhee of Missouri. McGhee got the best of Peters in the last meeting 9-5, but Peters won the first meeting in late November 7-5.

Kyle Larson comes into the NCAA Tournament trying to ride the wave of stealing an automatic qualifier spot at the Big 12 tournament. Larson will have his hands first round as he faces the returning national champion. A loss there would drop him into the pigtail match.

National outlook: The top four seeds at 125 look to be heavy favorites to make the semifinals Friday night. These four wrestlers have met each other 10 times over the last two years with no margin of victory being more than two points and six of those matches going into overtime. As close as these four wrestlers are, one of them still stands just a little bit above the rest and that man is Nathan Tomasello. He is the returning national champ at 125lbs. Tomasello has rattled of 41 straight wins after suffering a 2-1 loss in the tiebreaker to Thomas Gilman on January 4th of last year. 125 showed us last year with Zeke Moisey of West Virginia that major upsets can happen at anytime. Klimara, Peters, and Millhof to name a few, have the talent to knock one or more of the top 4.

Cory Clark will be the favorite to make the semifinals where he could potentially have a Big Ten finals rematch against Zane Richards of Illinois. Clark’s first round opponent will be against Utah Valley’s Jade Rauser, who is 20-6 on the season.

Earl Hall of Iowa State comes in as the #8 seed and is very capable of returning to the awards stand. Hall has seven losses on the year but four of those have come to Clark and Brewer.

Josh Alber has a decent opponent in Gary Wayne Harding of Oklahoma State first round. Alber is favored to win that match where he will look to upset Clark in the second round. The loser of Clark/Alber could find themselves in a tough situation right away on the backside where they would likely face returning All-American Mason Beckman of Lehigh.

National outlook: Both of your finalist from last year return at 133lbs, but neither of them are the favorite on paper to win this weight. Nahshon Garrett of Cornell is up a weight class this year after struggling with weight last year. He has been extremely dominant at his new weight scoring bonus points in 24 of his 32 matches this year. Garrett has not wrestled Richards or Clark in his college career. Nahshon does have a win over Brewer earlier this year though. Jordan Conaway is very capable to compete with the top 4 seeds, but he will have his hands full second round where he will face #12 seed Ryan Taylor of Wisconsin who beat him twice at Big Tens.

National outlook: This weight returns 4 AA’s from 141 a year ago and Jimmy Gulibon who is up a weight after placing 5th last year at 133.  Sophomore Dean Heil received the #1 seed and has been solid all year for the Cowboys, he looks to have a solid path to the quarters where he could meet #8 Joseph Ward (North Carolina). Ward won their previous meeting this year 3-1 SV1. Three returning AA’s reside in the next quarter of the bracket, highlighted by a first round match between #5 seed Matt Manley and Gulibon. The winner of Manley/Gulibon will likely see Chris Mecate (Old Dominion) in the second round, Anthony Ashnault coming off a B1G title should be waiting in the quarters. #3 seed Kevin Jack (NC State) and #2 Joey McKenna (Stanford) look to be on a crash course in the bottom half of the bracket. Another match to keep an eye on is the Thorn/Jordan rematch in the second round, Jordan was able to get the pin at B1G’s for third place.

Brandon Sorensen comes into the tournament as the #2 seed posting a 29-1 record on the season. Brandon will need to bring his ‘A’ game as he will likely see returning All-American Daniel Neff of Lock Haven in the second round. Jake Sueflohn (Nebraska), who Sorensen has defeated three times this year, is his probable Friday morning opponent. I like his chances of making the semis where his opponent should be the winner of Jason Tsirtsis/LavionMayes.

National outlook: #1 seed Zain Retherford comes in as a heavy favorite at this weight class and is a key component in the Nittany Lions chances to bring home the team title.  The biggest surprise to come out of the seeding meeting may be Matt Cimato receiving the #4 seed for Drexel. Cimato will likely meet #5 seed Alec Pantaleo (Michigan) in the quarters with the winner getting a shot at Retherford. The bottom side of the bracket is lead by three B1G wrestlers (Sorensen, Sueflohn and Tsirtsis) and #3 seed Lavion Mayes of Missouri. #11 seed Anthony Collica (Oklahoma State) and Tsirtsis should be a great second round match.

Cooper may have been given a gift by being the #13 seed because sitting at #4 is Ian Miller whom had to injury default out of the MAC Championships. If Miller is still injured Cooper will have a great shot at advancing into the quarterfinals. The same could be said for his next potential matchup with Dylan Palacio of Cornell. Palacio has been up and down and has had injuries throughout the season. Cooper should be able to get out of the first round but going further in the championship bracket really will be determined on the health of the other wrestlers. If Miller and Palacio are healthy, Cooper will have to wrestle lights out to advance.

True freshman Bryce Steiert will start his career at the NCAA Championships with a pigtail match against Spartak Chino (Ohio) a conference foe. Guess what? If he wins his pigtail he will wrestle another conference foe in Luke Smith (CMU). MAC fans are discouraged but I can’t imagine the Steiert camp is too incredibly upset. The coaching staff will know the most about Chino and Smith than any of the other wrestlers in the brackets. These are two very winnable matches and in our opinion will be favored. Getting past Joseph Smith from Oklahoma State though will be a tough matchup in the second round if his match goes to chaulk. If Steiert does go to the consolation bracket and wins his first match, watch out!

Isaiah Martinez from Illiniois and Jason Nolf of Penn State are easily the talk of the 157 pound bracket. Martinez the returning national champ goes down to Nolf in their meeting earlier in season by fall. Then they meet again in the Big Ten Championships. Martinez and Nolf look to be going out of bounds when Martinez scrambles out of the position to come out on top with the takedown and another Big Ten title. Imar gets the No. 1 seed and Jason Nolf gets the No. 3 seed setting up the possible rubber match. Thomas Gantt, NC State, though won’t be laying down in the semi’s to Nolf. Gantt is 24-0 on the season and is one of six undefeated wrestlers entering the tournament. My gut says to pick Nolf but Martinez is the only returning All-American at this weight class and that experience will get him back to the top of the award stand.