Missouri in First Place after day one of MAC Tournament, UNI Third 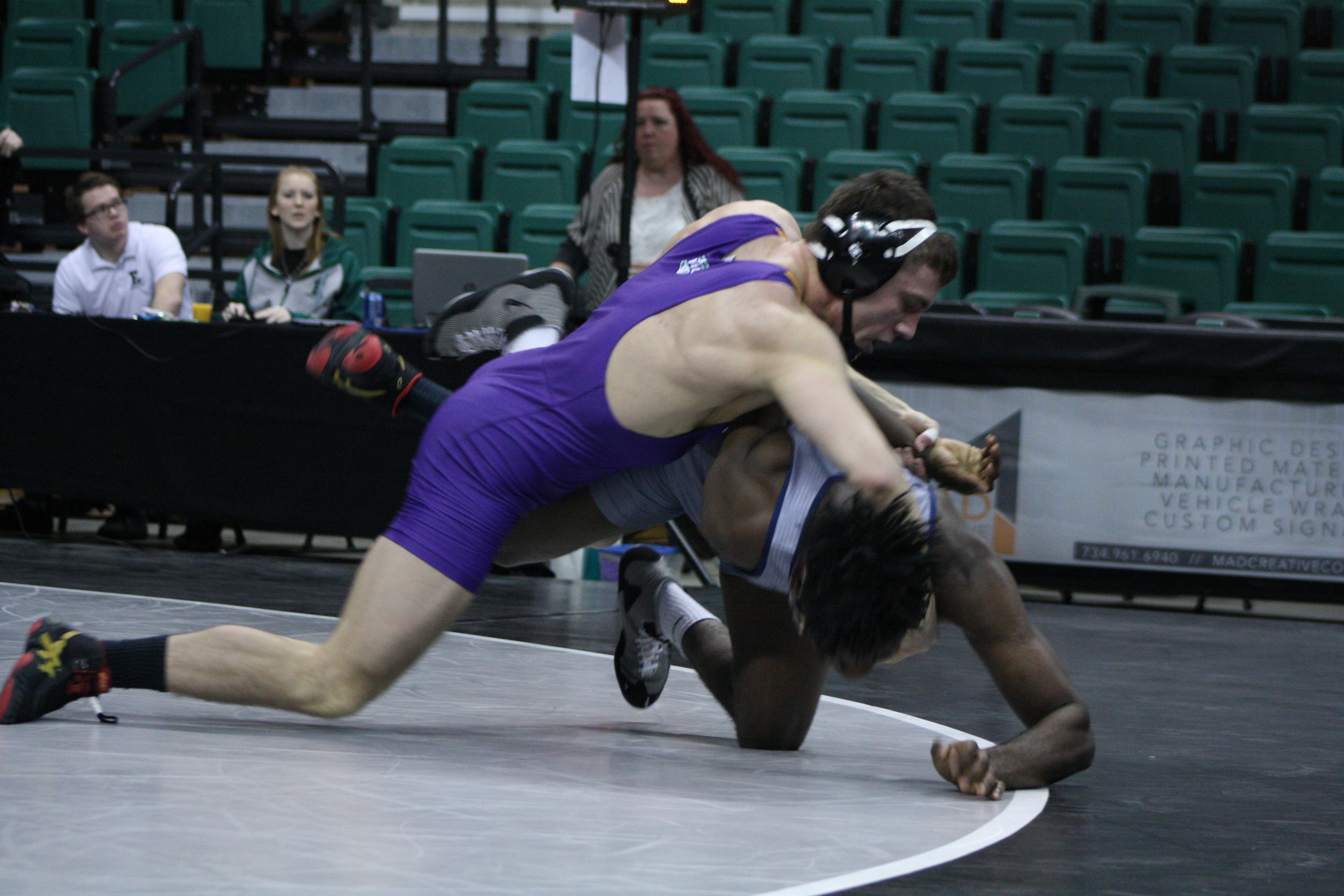 The Missouri Tigers put a conference-leading six men in the finals of the MAC Tournament today at Eastern Michigan. The Tigers have a 27.5 point lead on second place Central Michigan, who are in second place with 76 points. Northern Iowa is in third with 60. Every school has at least one man in the finals

Missouri was led by it’s 165 and 197 pound wrestlers in Daniel Lewis and J’den Cox. Neither man has surrendered an offensive point in the tournament; Cox has won both of his by fall, and Lewis won his two matches 10-0, and 12-0. The Tigers other finalists come in at 125 in Barlow McGhee, 141 in Matt Manley, 157 in LeRoy Barnes, and at 174 in Blaise Butler. Missouri’s other four wrestlers remain alive on the backside of their brackets as well.

The Chippewa’s of Central Michigan had a pretty good day too, placing four in the finals tomorrow afternoon and five still alive on the backside. At 184 pounds CMU’s Jordan Ellingwood had a big upset win over the #1 seed Willie Miklus of Missouri, 3-1 to advance to the finals. Corey Keener, Justin Oliver, and the #1 seed at 174 pounds Michael Ottinger also advanced to the final. The Chippewa’s well have to have success on the backside of the tournament early tomorrow if they have any hope of catching Missouri.

Northern Iowa put their two top-seed wrestlers in the finals. At 125 pounds Dylan Peters used a fall and a decision win to put himself in his third MAC Championship match in as many years. At the other end of the weights Blaize Cabell didn’t have any trouble with his first two opponents either, winning the two matches by a combined score of 25-12.

At 157 pounds UNI’s true freshman Bryce Steiert avenged a loss he suffered earlier in the year, winning 6-3 over Luke Smith of Central Michigan. He’ll have the opportunity to wrestle not top-seeded Ian Miller like so many predicted, but Missouri’s LeRoy Barns. Miller was hit in the head during his and Barns’ semifinal match and was not allowed to continue due to concussion protocol. It was a process that took at least 10 minutes to complete from evaluation to decision.

Ohio and Kent State are in a close battle for fourth, with each qualifying one wrestler for the finals. In addition to their 197 pounder Phil Wellington making the final, Ohio has 7 wrestlers active on the backsides. The Golden Flashes meanwhile have 6 on the backside as well as finalist Mike DePalma.

Buffalo, Northern Illinois, and Eastern Michigan all placed one man in the finals as well. UB’s heavyweight, Jake Gunning, will get a rematch with UNI’s Cabell from a few weeks ago. Cabell won the first meeting 9-6.

Northern Illinois’ Corey Keener advanced by scoring a win by fall over Ohio’s Cameron Kelly. The 133 pound weight bracket was a little different than expected, as ODU’s Emilio Saavedra did not make weight. Either was moved up to Saavedra’s seed, and made the most of it by defeating Shayne Wireman from EMU in the semi’s to make the finals.

Eastern Michigan’s 165 pounder Dakota Juarez upset the number two seeded Cooper Moore to earn his spot in the finals. Juarez took Moore down with just two seconds left in the first period and was able to hold Moore off for the 4-3 decision. Juarez will face Missouri’s Daniel Lewis in the final.

Despite having two finalists the Old Dominion Monarchs sit in last place with 35 total team points. ODU is led by it’s 141 pounder Chris Mecate, who took down Kyle Springer as well as Steve Bleise to make the finals against Matt Manley from Missouri. The Monarchs other two seed did just as well, defeating UNI’s Drew Foster and then Andrew Romanchik to face Central Michigan’s Jordan Ellingwood.

Wrestling gets started tomorrow at noon eastern time starting with the consolation semifinals, the finals parade, and then the placing rounds. Check out all the action on ESPN3!

We’ll also have photos from all of today’s matches and video of Coach Schwab recapping the day up later tonight, sorry the internet here in Michigan is pretty slow for uploads.

3 thoughts on “Missouri in First Place after day one of MAC Tournament, UNI Third”