3A Bracket Breakdowns and Predictions 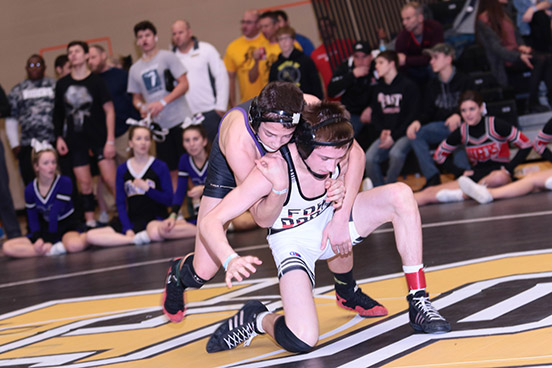 106 – The top half of this bracket features 3 ranked wrestlers lead by #3 Nick Oldham (WDM Valley). After dropping his district finals match (Biscoglia), he’ll be looking to rebound against Isaac Larkin (Clinton). The winner will likely get #5 Conrad Braswell (Prairie, CR) in the quarters. #4 Kobey Pricthard is the lone ranked wrestler in the top quarter; Oldham and Pritchard have met 4 times this year and Oldham holds the 3 to 1 advantage.

The bottom side of this group is loaded with 6 ranked wrestlers. #1 Kyle Biscoglia (Waukee) will have #9 Riley Thomas (North Scott) in the first round, while #2 Drew Bennett (Fort Dodge) takes on #8 Dylan Albrecht (Waverly-Shell Rock); the winners of each will meet in the bottom quarter. #7 Dillon Gottschalk (Dubuque Hempstead) and #6 Paxton Whiteaker (Lewis Central) will likely meet in the top quarter. Everyone
should have their eyes glued to Mat 4 on Friday afternoon if Biscoglia and Bennett meet to kick off the quarterfinal round.

113 – There are 4 ranked wrestlers in the top half of this bracket, including the defending and undefeated state champ Brody Teske (Fort Dodge). He will have #10 Joe Pins (Dubuque Hempstead) in the first round with the winner likely facing #4 Gauge Perrien (SE Polk). Teske defeated Perrien 14-4 in the Fort Dodge dual earlier this year. #5 Jacob Schipper (North Scott) is the lone ranked wrestler in the top quarter.

The bottom half of this bracket also features 4 ranked wrestlers, starting with #2 McGwire Midkiff (CBTJ) who will hook’em up with #6 Hunter Versteegh (Newton). Versteegh battled through a tough district this year, but was still able to qualify despite a loss to Perrien 4-1 in the district finals. #3 Marcus England (Prairie, CR) and #7 Lance Runyon (Indianola) should meet in the top quarter.

120 – The top quarter of this bracket is lead by #6 Harlan Steffensmeier (Fort Madison); he should see the winner of #10 Matthew Jordan (DM East) vs. UR Brandon Wieland (Lewis Central) for a good matchup in the quarters. Bottom quarter will be a must-see with #1 Jack Wagner (Bettendorf) going head to head with the winner of #5 Brenden Baker (CR Jefferson) vs. #4 Jakob Allison (Waukee).

The bottom half consists of 4 ranked wrestlers, beginning with a battle between #2 Adam Brown (SE Polk) and #7 Bradan Birt (Epworth, Western Dubuque) in the first round. #3 Zach Price leads the way in the top quarter, and will likely see CIML foe #9 Alec Clark for a ticket to the semis. If Brown and Price are each able to navigate to the semis, it would be their 3rd time wrestling each other this year. The previous meetings have resulted in one win for each wrestler.

126 – For the first time in history, two wrestlers with the same name, #9 Jake Watters (Dowling Catholic) and Jacob Watters (Cedar Falls), face off in the first round Thursday afternoon. #2 Nathan Lendt (SE Polk) will take on #8 Tyler Menegay (Ankeny) in a 1st round bout between ranked wrestlers. The winner of that match will likely meet #3 Nolan Hromidko (CR Kennedy) in the top quarter.

#1 Triston Lara (Fort Dodge) highlights the bottom half of the bracket that features 4 other wrestlers ranked in the top ten. #5 Donny Allaway (LeMars) vs. #7 Will Foreman (CR Washington) will be a bout to keep an eye on, with the winner facing Lara in the top quarter. Undefeated and 4th ranked Brant O’Shea (Keokuk) is the favorite to emerge from the bottom quarter.

132 – The top half of this bracket features both #1 Sam Uthoff (Prairie, CR) and #2 Grant Stotts (Valley, WDM) in separate quarters. These two will be on a crash course to meet in the semis, where Stotts will look to avenge a 10-2 major decision loss that came at the Mendenhall tournament in early January. #7 Drew Sams (Oskaloosa) and #9 Joe Howard (Indianola) also reside on this side of the bracket.

This half of the bracket features a must-see first round matchup between red hot #3 Camiran Sadeghi (Keokuk), who’s only in-class loss came at the hands of Hromidko in late December, and #4 Zane Mulder (Dallas Center-Grimes). #5 Keenan Cook (Fort Dodge) will likely await the winner of #6 Austin Yant (Waverly-Shell Rock) and UR Nathan Feldman (Dubuque Hempstead) to decide the semi-finalist out of the top quarter.

138 – The winner of #1 Zach Barnes (SE Polk) and #3 Nelson Brands (Iowa City West) in the top quarter will likely represent this side of the bracket in the finals. UR Lanny Herzog (CBAL) comes in with an impressive 44-5 record, and will face #10 Jess Chapman (Clinton) in a first round bout. #9 Nicholas Graham (Johnston) and Cole Detmering (Fort Dodge) will tangle to see who gets to battle the winner of Herzog/Chapman.

The bottom half showcases 5 top ten wrestlers and features a first round match between #7 Mason Hulse (Boone) and #6 Jace Williams (Ankeny Centennial). Williams spent half of the year at 145 before moving down to 138. #2 Jackson Gallagher (Bettendorf) will await the winner of Hulse/Williams. #4 Clint Lembeck (Xaiver, CR), who placed 3rd at last year’s championships, should lock up with #5 Alex Streicher in the top quarter.

145 – All 10 ranked wrestlers made it to state in this bracket. The clear favorite coming in has to be returning state champion, and #1 ranked Michael Zachary (Dowling Catholic). #4 Cayd Lara (Fort Dodge) will look to knock off Zachary in the top quarter, while #2 Spencer Nevills (Pleasant Valley) and #10 Johnny Clymer (Linn-Mar, Marion) will battle in the first round. The winner of Nevills/Clymer has a great chance to see the Zachary/Lara victor in the semis.

#3 Joel Shapiro (Valley, WDM) comes in as the highest ranked wrestler on this side of the bracket and will face CIML foe and #9 ranked Alec Ksiazek (Johnston) in the first round. The winner of that match will wrestle either #8 Colten Mertens (Mount Pleasant), who brings an unblemished 38-0 record into state, or #7 Sam Kastle (Carroll). The bottom quarter should see #5 Josh Gerke (Xaiver, CR) and #6 Alex Ward (Dubuque Hempstead) in a rematch from the MVC Super Meet finals, which Gerke took by a score of 5-2.

152 –There are 5 ranked wrestlers in this group. #6 Logen Rodriguez (CR Kennedy) and #10 Alec Helpkamp (Ankeny Centennnial) will square off in a battle of ranked wrestlers; the winner likely gets #2 Mac Southard in the top quarter. #4 Christian Foote (Pleasant Valley), who decided to go back out for wrestling just before winter break, and #9 Zach Wagenhoffer (Waverly-Shell Rock) should meet in the bottom quarter. I predict Southard and Foote will meet in the semi-finals.

This side of the bracket only has 2 ranked wrestlers; who does these rankings anyway? #1 Colton Clingenpeel (CBTJ) brings a 56-0 record with him to WFA and will meet #3 Kyle Briggs (CR Jefferson) in the top quarter. The bottom quarter of the bracket has 4 unranked, but not undeserving, wrestlers to battle for a semi-final spot. Solomon Jones (SE Polk) will give SE Polk the upper hand in the team race if he can secure a top 6 spot in the weight class by winning a couple of matches.

160 – Each of the 4 first round matches will feature 1 ranked wrestler. #6 Jacob Carlson (Mason City) and #8 Tyler Bitting (Keokuk) should meet in the top quarter. I think #1 Jack Koethe (Valley, WDM) and #5 Ben Sarasin (CR Kennedy) will showdown in the other quarter on this side. Koethe was able to hang on at CIML’s against Carlson 1-0, so we may see a different result this time around.

#2 Seth Walker (Waverly-Shell Rock) will lead the way on this half of the bracket with a likely quarter-final match with #7 Austin Garcia (Johnston). #3 Shea Hartzler (Linn-Mar, Marion) looks to have the inside track to the quarters and will face the winner of UR Cory Lear (Lewis Central) vs #10 Gavin Babcock (SE Polk), who pulled off a fall in his wrestle-back match to qualify for State.

170 – Keep an eye on UR Jacob Dykes (Iowa City High) and #9 Bryce Pilcher (Cedar Falls) as they battle it out in the first round match-up. The winner of that match will likely go head to head with #2 Deion Clayborne (Sioux City North) in the top quarter. Look for #5 Jonah Egli to rebound from a district final loss (Coleman) to setup what should be a great match with #10 Garrett Kubovec (CR Kennedy).

The bottom half of the bracket features #1 Marcus Coleman (Ames) who will be determined to add another 1st place medal to the collection he started last year (152). #4 Brandon Haas (Dubuque Hempstead) and #7 Autin Stotts (Valley, WDM) will meet in another must-see first round bout. #3 Josh Edel (Marshalltown) is the only ranked wrestler in the top quarter.

182 – Another top ten first round match underlines this bracket with #7 Kaden Sauer (Dowling Catholic), fresh off a district title, tangling with #4 Isaac Bartel (Mason City). Bartel has bested Sauer twice already this year by scores of 4-0 and 6-3. #1 Max Lyon (Epworth, Western Dubuque) is the lone ranked wrestler in the top quarter, but could be tested by Duncan Lee (Newton) who knocked off 2 ranked wrestlers before being crowned district champion last weekend. #5 David Carr (Pleasant Valley) will likely await the Bartel/Sauer winner.

On this side #2 Jacob Wiley (Sioux City East) will meet #8 Nick Dreckman (CR Jefferson) in the first round. Wiley has zero losses against 3A opponents this season, and I foresee him continuing that streak. In the bottom quarter I’m looking forward to a possible matchup between #6 Jamiir Moore (Waverly-Shell Rock) and #4 Isaiah Cox (Ottumwa); I wouldn’t be surprised if someone went for a ride in this one. I predict Cox moving into the semi-finals as a result.

195 – This is yet another weight where all ten ranked wrestlers qualified; 3 of which are on this side of the bracket. #4 Taylor Mehmen (Prairie, CR) has the upper hand in the top quarter. #5 Chance Cary (Pleasant Valley) and #7 Logan Buck (Dallas Center-Grimes) will meet in the bottom quarter. Mehmen vs. Cary sounds like an intriguing semi-final.

Now to the bottom side of the bracket where 7 of 8 wrestlers are ranked in the top 10. #8 Jacob Zachary (Dowling Catholic) draws #3 Justin Guilliams (Clinton) in the first round, followed by #2 Donovan Doyle (Iowa City West) squaring off against #6 Connor Corbin (Valley, WDM); the winners will meet in bottom quarter. #1 Sam Cook (Fort Dodge) will be the heavy favorite in the top quarter. The Cook/Doyle match that everyone is waiting for will ensue Friday night.

220 – Two-time defending state champion and OK State bound #1 Ethan Andersen (SE Polk) draws the one spot in the bracket and will look to continue his win streak at the Well. #8 Trevor Barry (Clinton) and #6 Christian Heimer (Ankeny Centennial) should meet in the bottom quarter.

This side of the bracket is highlighted by a great first round match between #2 Rocky Lombardi (Valley, WDM) vs. #5 Peyton Williams (Marshalltown). #3 Wyatt Wriedt (North Scott) will have to best #7 Harrison Townsend (Ames) in last quarter-final match.

285 – The 5 ranked wrestlers on the top half are lead by #4 Aaron Costello (Epworth, Western Dubuque) who tangles with #9 Tyler Clark (Clinton). Clark is fresh off a victory over Erpelding in the district finals. #5 Eagan Lickiss (Indianola) and #8 Ad Edwards face off in a rematch of the semis-finals at the CIML’s, which Lickiss won 4-0. Clark vs. Lickiss is the semi-final I expect.

#1 Gannon Gremmel (Dubuque Hempstead) will be tested early by #3 Max Erpelding (Bettendorf). #2 Daniel Ramirez (SE Polk) is the favorite to meet the winner in the semi-finals. #7 Omar Begic (Waterloo East) is the only ranked wrestler on this side.

One thought on “3A Bracket Breakdowns and Predictions”