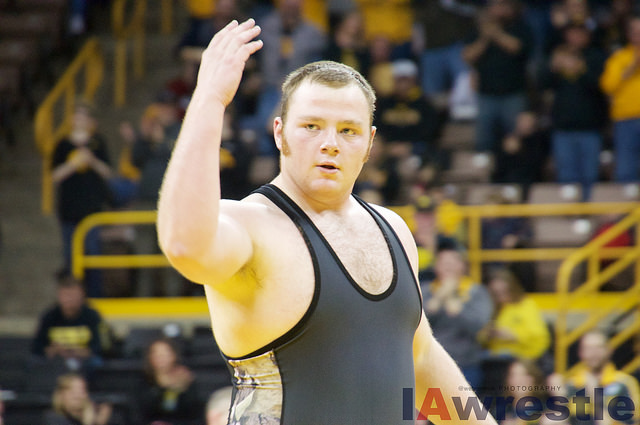 The Iowa Hawkeyes recorded a shutout in their final regular season dual of the season, posting a 51-0 win over one of the top NAIA programs, Montana State-Northern. The Hawkeyes picked up bonus points in eight of the night’s 10 matches, including the team picking up six falls. That number was the most fall recorded by Iowa in a dual since they pinned nine against Cornell College in the Iowa City Duals last November.

Thomas Gilman kicked things off to record his eighth fall of the season when he decked Quintel Fuchs in the first period at 125 pounds. Teammate Cory Clark was able to follow with a fall of his own at 133 pounds to put the Hawks up 12-0.

Coming off his first career pin in Carver, Brody Grothus took to the mat at 141 pounds and put on a big 13-3 major decision over Matt Weber. Grothus continues to tighten down on securing this weight as his spot for the post season.

From there the Hawkeyes got back-to-back falls from sophomore Brandon Sorensen (149) and senior Edwin Cooper (157), and Patrick Rhoads added a technical fall at 165 to push Iowa’s lead to 33-0.

It was Willie Miller of Montana State that was able to put a stop to Iowa’s six match bonus point winning streak, as he gave junior 174 pound wrestler Alex Meyer all he could handle. Meyer was able to come out on top of the match, 11-9.

Both Sam’s, Brooks and Stoll, were able to record falls in their matches on the night with Stoll getting his ninth fall of the season and taking sole possession of the team lead.

Senior Nathan Burak won 8-3 against Garrett DeMers, in what was the only other Hawkeye to not pick up bonus on the night.

Iowa fans can now settle in as the next two times the Hawkeyes take the mat will be at home. Next week starts the National Duals series and what the Hawkeyes do know is that it will be a home dual. What they don’t know is who they will face.

This year National Duals will be contested similar to the old NCAA Football BCS Bowl Series. The NWCA select the top eight Big Ten teams according to their dual record finish and pit them against the other seven conference champions. An eighth team will also be selected as an “at large” which means there can be two teams from one conference (but the at large team cannot be from the Big Ten). Tiebreakers will be decided by NWCA coaches poll ranking (i.e. even though both Iowa and Penn State are undefeated, Penn State owns the tiebreaker by being ranked #1 over Iowa in the poll).

With ACC favorite North Carolina State dropping their dual with Virginia Tech last night, it should assure that Oklahoma State will be the top non-Big Ten team, and the Cowboys will wrestle for the national title against Penn State. The possibilities for Iowa appear to be at this time: Missouri, North Carolina State, or Virginia Tech. If Missouri wins out they will most likely be the team heading to Iowa City, though their remaining dual is with that tough North Carolina State program. A Missouri loss would shake up the rankings, which would possibly throw Virginia Tech into the conversation.

That Dual will take place Monday, February 22nd. Following that the Hawkeys will have a week off before they host the Big Ten conference tournament the first week in March.