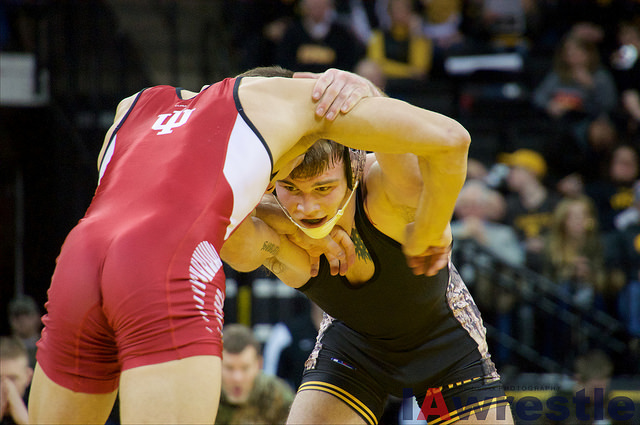 The second ranked Iowa Hawkeyes will make their final regular season road trip to Montana this week to face NAIA power Montana State-Northern to close out the regular season. I caught up with Associate Head Coach Terry Brands to ask him why Iowa was facing Montana State and he responded that the Hawks were looking for a road trip out West, and that Montana State was the only school that was able to work them into the schedule.

Looking at the Montana State program, the good news is that Iowa selected a premier NAIA program to face. With eight of the Montana State wrestlers ranked in their division, and all but three of those being a top ten wrestler.

All in all, this should be a dual that favors the Hawkeyes by a hefty margin. Montana State is one of the best programs NAIA has to offer, but some of this Hawkeye lineup should challenge the previous meeting between these two team, which was a 50-0 win for Iowa back in 1995.

Several Hawkeyes enter wrestling at a really high level over the past few weeks, chief among that group being Thomas Gilman. The 125 pound All-American is 15-0 in duals, but more impressive is the fact that he is averaging more than five team points (or a technical fall) in each dual start.

In addition to Gilman, Sam Stoll has entered his first season as a Hawkeye in a big way, with the heavyweight currently leading the team with eight falls on the season.

Nathan Burak enters Friday winning over half of his matches this season by bonus, which is more than double from where he was in 2015 (22%).

Since his loss by fall against Nebraska All-American TJ Dudley, Sammy Brooks has responded with back-to-back technical fall victories, giving fans a glimpse of what they saw out of the junior to start the season. Brooks opened the year with eight of his first nine wins by bonus.

Continuing with the positives sophomore Brandon Sorensen moved to 21-0 last Friday, which means the 149 pound wrestler leads Iowa in winning percentage and number of wins.

Patrick Rhoads appears to have the 165 spot locked up after a solid major decision on senior night. The last remaining spot that appears to be up for grabs is the 141 spot, contested by Topher Carton and Brody Grothus.