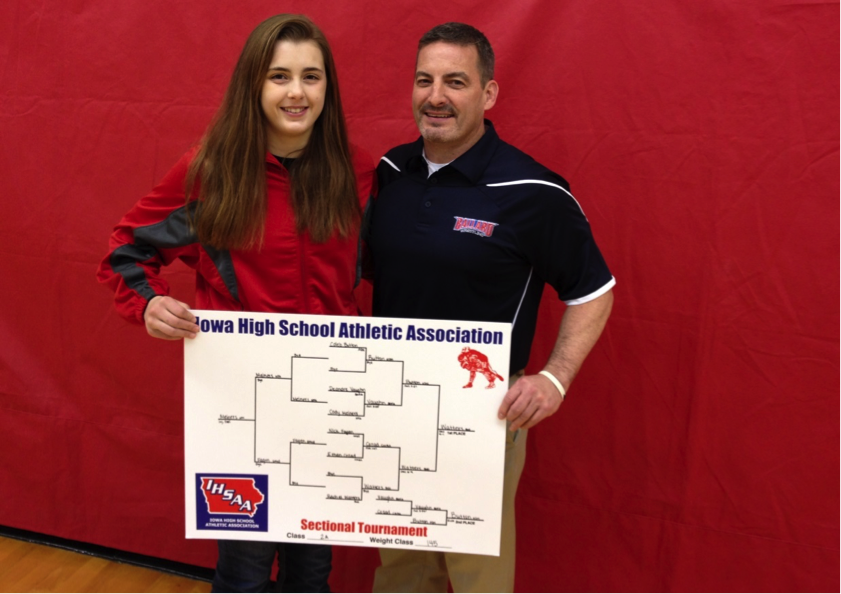 Saturday was filled with sectional competition for Class 1A and 2A wrestlers throughout the state. The top 2 place winners in each weight class from each of the 16 sectionals qualified for districts next weekend. The top 2 in each weight class from the 8 districts will move on to the individual state championships in Wells Fargo Arena on Thursday, Friday, and Saturday, February 18-20. In addition, the top 2 team finishers in each sectional, qualified for the regional dual team competition taking place Tuesday night, February 9. The dual team champion from each region will move on to the state dual team championships in Wells Fargo Arena on Wednesday, February 17.

Class 3A is structured differently, with no sectional competition. Class 3A will wrestle their district competition Saturday, February 13 with the top 2 in each weight class from each of the 8 districts moving on to the state championships. In dual team competition, Class 3A is based on the top 24 teams ranked by the IWCOA (Iowa Wrestling Coaches and Officials Association). Competition will take place Wednesday, February 10th with the champion from each of the 8 regions moving on to the state dual team championships.

Our biggest news of the week is Rachel Watters’ 145 pound Sectional 11 championship. Watters, a senior from Ballard, went 2-0 for the day. She started the competition with a bye followed by a 6-4 win over Ethan Cozad, a senior from CMB. Watters then moved to the finals to face Caleb Button, a sophomore from ADM. Watters had lost to Button in overtime the previous weekend, but was able to control the match and pick up a 4-1 decision. With that victory, Watters became the second female in Iowa history to win a sectional championship and the first to do so in Class 2A. Megan Black of Eddyville-Blakesburg-Fremont was the first to win a sectional in 2012. Black went on to make it to state as one of only two females in Iowa wrestling history to do so. Cassy Herkelman also made it to state but wrestled for Cedar Falls, a Class 3A school who does not have sectional competition.

Class 1A & Class 2A INDIVIDUAL SECTIONALS

There were 10 wrestlers who competed at the varsity level in the class 1A & 2A sectionals:

Emily Reis, a senior from Regina went 0-2 for the day.

Kylie Siebrecht, a sophomore from Alta-Aurelia went 0-1 for the day.

Felicity Taylor, a sophomore from South Winneshiek went 0-2 for the day.

Shelby Blake, a freshman from Osage went 0-2 for the day.

Cheyenne Sedlacek, a senior from WACO went 0-1 for the day.

Keagan King, a freshman from South Central Calhoun went 0-2 for the day.

McKinna Faulkenberry, a sophomore from OA-BCIG went 0-2 for the day.

Brittney Shumate, a sophomore from Woodbine went 0-1 for the day.

Rachel Watters, a senior from Ballard went 2-0 for the day winning the sectional championship and will be competing in Knoxville on Saturday, February 13 in the District 6 competition.

Larissa Moore, a junior from North Cedar went 0-1 for the day.

Based on past competition, the following female athletes may be competing Saturday, February 13 in 3A districts:

Kaia Graham, a freshman from Oskaloosa.

The following female athletes may be competing in regional dual team competition:

Class 1A and Class 2A-Tuesday, February 9:

Emily Reis, 106 pounds of Regina-Class 1A at Alburnett

Shelby Blake, 113 pounds of Osage-Class 2A at New Hampton

McKinna Faulkenberry, 132 pounds of OA-BCIG-Class 1A at Westwood

Rachel Watters, 145 pounds of Ballard-Class 2A at Albia

Based on the teams represented in dual team regions, it appears that there will be no female wrestlers competing at the Class 3A level.

Here are the complete high school results since our last update: