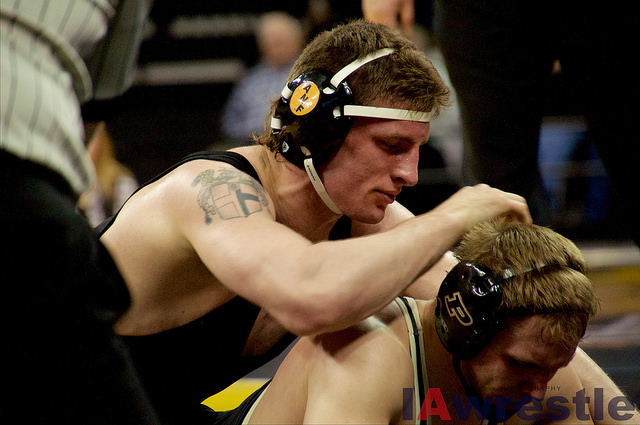 It was a beating in Carver with the Iowa Hawkeyes hosting the #23 ranked Minnesota Gophers in what is annually a big rivalry dual. This year is obviously an outlier with the Hawks racking up 34 points against the Gophers, dropping matches at 141 and 197 pounds.

Thomas Gilman has been the ultimate sparkplug for the Iowa lineup this season, as he racked up his seventh fall of the season over Skyler Petry in the first period. The fall moved the 125 pound All-American back into a tie for team lead in falls. Gilman is currently averaging over a technical fall in every dual appearance for Iowa.

“I am just letting things fly,” Gilman said on his high scoring transformation, “This year I am just going out to dominate and score points, and get better every match.”

After a slow 2-0 win over Eric Montoya last week, Clark was able to match Gilman with a fall of his own, pinning Sam Brancale in the closing seconds of the second period to put Iowa up 12-0. (Hear from Cory Clark after his fall)

Minnesota was able to get their first win of the night at 141 pounds with seventh ranked Tommy Thorn putting up a 6-4 decision over Iowa senior Brody Grothus. Grothus now moves to 1-1 in the Big Ten dual season, but his showing against Thorn proved that he is able to hang with some of the best this weight class has to offer.

Sorensen was then able to get things back rolling in the Hawkeyes favor picking up a 6-2 decision over #10 ranked Jake Short at 149 pounds. Teammate Edwin Cooper Jr needed sudden victory to get by Minnesota’s Brandon Kinglsey.

Patrick Rhoads came out on a mission at 165 pounds racking up a 21-7 major decision over Dylan Urbach. Brands has yet to officially anoint who will be his post season starter, but a high scoring performance by Rhoads certainly has to help his case.

A pair of Hawkeyes were able to get back on track and look more like their early-season selves as Alex Meyer racked up a 10-1 victory at 174 pounds and Sammy Brooks rebounded from his loss in Nebraska with a first period technical fall. After the dual Brooks said it felt great to get back on the winning side. Another thing Brooks noted was that when Gilman is able to go out and set that early tone, the rest of the team feeds off his energy.

The only upset for Minnesota occurred at 197 when #4 Brett Pfarr narrowly beat Nathan Burak 6-5. There was some late match controversy with Burak getting in on a late shot, and nearly finishing it before time expired. Iowa coach Tom Brands challenged the call, but the original no-takedown call was confirmed on the replay giving Minnesota their second and last win on the night.

Sam Stoll was then able to go slam the door against his former home state team with a 7-3 decision against Michael Kroells, a wrestler who has shared a history with Stoll since the Hawkeye  was an eighth grader.

Following the dual the head Hawkeye, Brands, was generally pleased with his team’s performance. The only thing that really got to Brands was not the fact that Burak lost at 197, but that he wasn’t awarded the takedown. Brands is was also very contemplative of Gilman in the presser.

“I think he’s natural to look to,” Brands said on Gilman’s big starts this season, “He runs that locker room. If there are things out of line he’ll let you know it.”

Hawkeyes will return to their home mat next Friday when they host Indiana on senior night in a 7:00 PM dual. The current Hawkeye lineup features four possible seniors starters in Grothus, Cooper Rhoads, and Burak.

One thought on “Iowa pounds Minnesota 34-6”