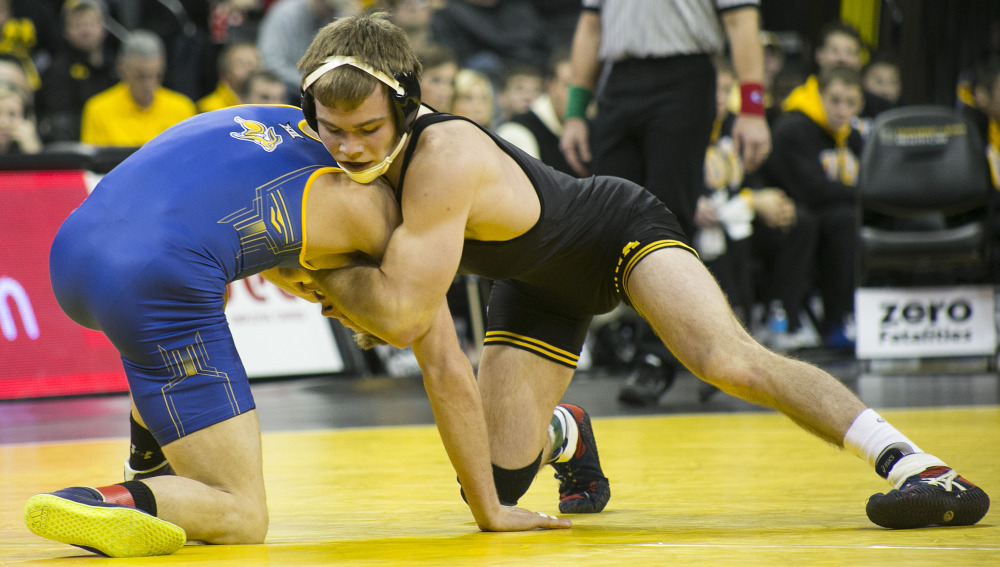 To say Thomas Gilman has been on a tear to start the year is putting it mildly. The junior All-American is off to a 15-0 start for the Hawkeyes and has amassed 16 team points in his last three matches at 125 pounds. Purdue’s Ben Thorton is having a nice year, but should provide little resistance against the bulldog Gilman is on the mat.

In fact, the Hawkeyes will be expected to be favored in a total of eight matches this Friday night, with Purdue featuring a pair of veterans at 141 and 165.

At 141 Purdue’s Danny Sabatello has just over a .500 record, but in his 11 wins he has managed to beat quality opponents like Anthony Abidin (Nebraska), Zach Horan (Central Michigan), and Dan Neff (Lock Haven). To Topher Carton’s credit he has be able to grind out some tough matches recently. His biggest win in this calendar year was a 5-4 over Illinois wrestler, Brock Ervin, that Carton won on third period conditioning and his continued attacks.

The other Purdue favorite will be Midlands champion Chad Welch, who is 21-3 on the season at 165 pounds. Hawkeye wrestler Patrick Rhoads is currently defeated against rank competition, with all seven of his losses coming to guys in the top 20.

The rest of the Hawkeye crowd should be in good shape against their Purdue opponents.

Cory Clark is coming off a decisive victory over Wisconsin top eight ranked Ryan Taylor this past weekend. It was a nice win for the Hawk who was looking for a quality win after falling to Zane Richards two weeks ago in Illinois.

Brandon Sorensen has moved to 17-0 on the year and is closing in on 60 career victories at 149 pounds. Also undefeated is 197 pound wrestler Nathan Burak, who will enter Friday’s competition at 15-0. In addition to having the best start of his career in terms of wins, Burak is also off to his best start with six of his victories against Division I competition being by bonus.

The final remaining match will pit Edwin Cooper Jr against Doug Welch, which Cooper won 7-1 in the previous meeting at the Midlands. Cooper and Welch are the only two wrestlers in each team’s lineup that have faced each other.

Don’t forget wrestling fans to arrive early for the dual, as USA Wrestling will be hold a special wrestle off for the Women’s freestyle team. That action begins at 6:30 PM, with the Iowa dual starting at 8:00 PM.