UNI Gets Second Conference Win of the Year 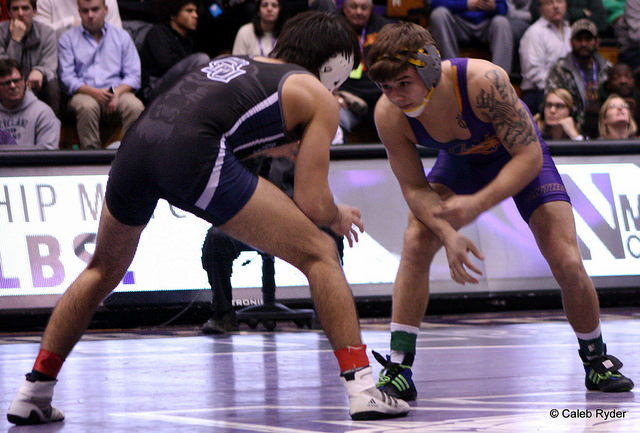 The Panthers bounced back after a close loss to Virginia Tech by taking seven of the ten matches against Old Dominion Sunday, winning the dual 24-12. UNI was led by Trevor Jauch, who upset the ninth-ranked Chris Mecate 5-3, and Blaize Cabell, who earned his second pinfall victory of the year.

Juach came back down to 141 pounds after wrestling, and winning, a match at 149 pounds against Virginia Tech Friday night. Jauch couldn’t get much going in the first period, but scored a takedown in both the second and third periods to get the dual started off well for the Panthers.

Cabell came out and didn’t waste time, scoring two takedowns in the first thirty seconds of the match. He was leading 9-4 in the second period when he hit a snap down and was able to turn Andrew Snyder for ODU for six team points.

The three other ranked wrestlers for UNI won their matches. Bryce Steiert had a couple of great scrambles to come out on top of Devin Geoghegan, 4-2. Right after Steiert’s match Cooper Moore once again took the mat after coming back form injury. Moore had a bit tougher time with The Monarch’s Seldon Wright, as Moore was in a 2-1 hole early on, but the Panther stated the course and hit four more takedowns to lock up the 11-6 lead.

In the last match of the day we saw a rematch of the 133 pound Midlands finals, with #17 Josh Alber taking on #14 Emillo Saavedra. Neither man was able to score a takedown in the match, and Alber was able to escape from bottom in the second period. Alber went on to ride Saavedra out in the third to win the rematch, 2-0.

Kyle Lux was the third Panther in a row to earn a win, a close decision with Brooks Climmons that Lux won in the second tiebreaker. At 194 pounds Jared Bartel won 7-1 over Austin Coburn. It was both Panthers’ second win at their respective weights in as many duals.

ODU was able to secure wins at 149, 184 and 125 pounds. Their number eight wrestler at 149 pounds, Alexander Richardson, and the largest win of the night, an 18-2 tech fall victory over UNI’s Jake Hodges. At 184 pounds number six Jack Dechow won by major decision 11-2 over Cody Caldwell. At 125 pounds Dylan Peters’ backup, Leighton Gaul, dropped a closer 7-3 decision.

UNI finally returns home on the 29th, when they take on Central Michigan in the West Gym. It starts a tough stretch of four duals in eight days for the Panthers, but they’re all in Cedar Falls.