UNI Goes On The Road To Eastern Michigan 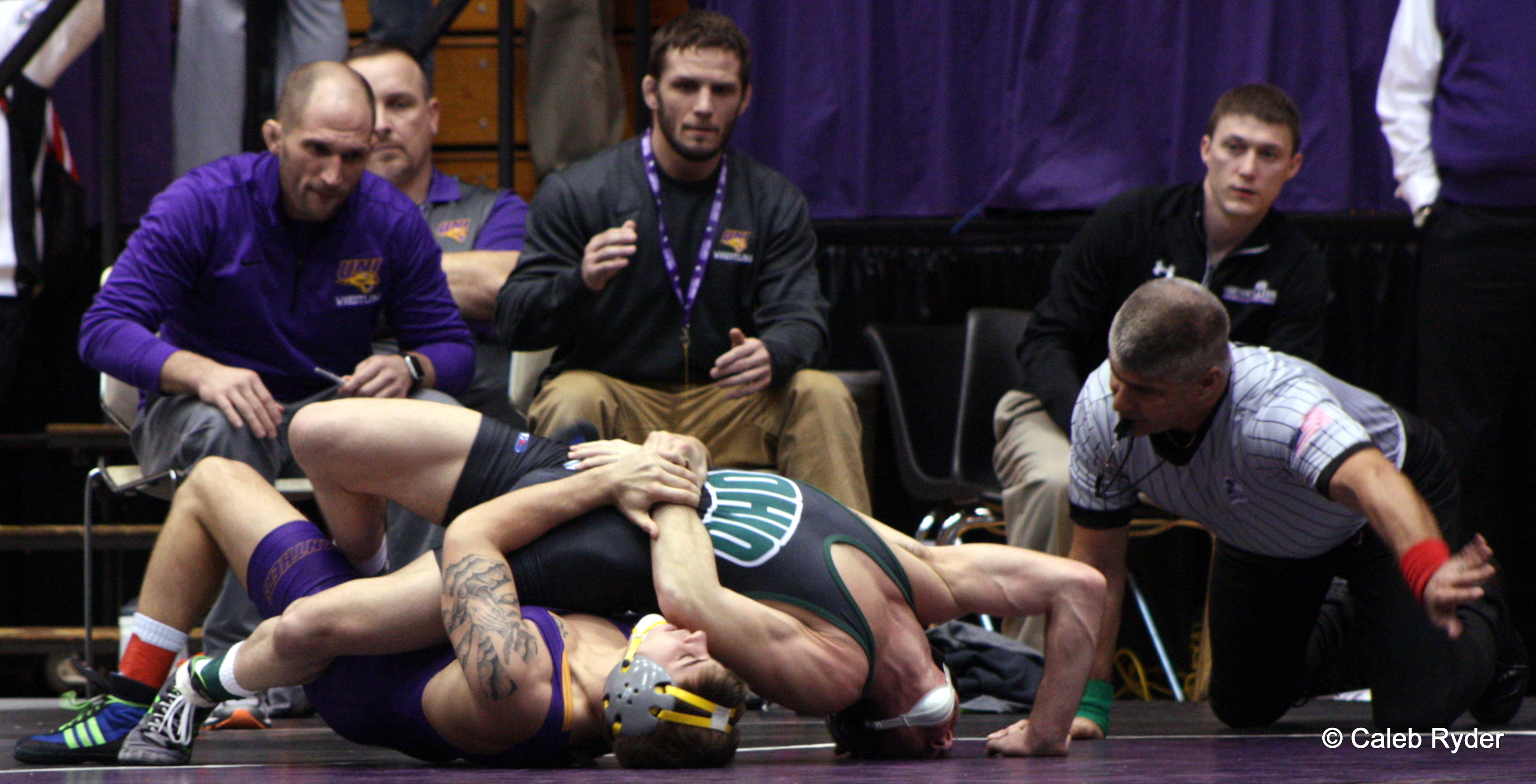 UNI kicks off the 2016 portion of their schedule with two duals this week, the first being against the Eastern Michigan Eagles in Ypsilanti (don’t ask me how to pronounce that one), Michigan. The Eagles have had a very good year so far, going 6-2 overall and 1-0 in the MAC Conference. EMU put in a dominating performance over Big Ten school Michigan State early in December, and has outscored dual opponents 230-85 so far this year.

I believe the biggest question for the Panthers coming into this dual is who will start at 141 and 149 pounds. After finishing in 13th place at The Midlands, UNI has some holes to fill. 141 saw a great start to the tournament, with Trevor Jauch dominating his first match, eventually winning by pinfall. He dropped his second match to Ronnie Perry from Lock Haven, and then would only win one match on the backside of the bracket before being knocked out by the 9th seeded Paul Kirchner from Rider. Jake Hodges had a similar tournament, going 1-2, while Jake Koethe won his opening match and then three matches on the backside of the bracket before losing to American University’s Tyler Scotton in sudden victory.

If you were hoping to see a wrestler come in and take hold of this weight in Evanston, we were a bit disappointed. Although Koethe had the best tournament, I think we’ll see Jauch get the nod at 141 pounds against Eastern Michigan, if only because of what we saw during the wrestle-offs to start the year. I think we’ll get to see Koethe bump up and wrestle at 149 pounds, but more on that in a minute. The Eagles will put Kyle Springer out at 141, and he’ll match up well with Jauch. Springer wrestled a lot last year as a redshirt, going 31-14 at open competitions, and he won his way back to the starting spot against last year’s starter Michael Shaw.

The 149 pound bracket for UNI at The Midlands was a good one as Max Thomsen wrestled unattached for the Panthers and nearly knocked off Jason Tsirtsis along the way. Thomsen tied the match late, scoring a takedown with 9 seconds left in the match, but Tsirtsis had riding time secure to take the match 4-3. I think where we saw a little bit of the future here for UNI, but I don’t think that Coach Schwab will pull his redshirt and start another true freshmen. With Gunnar Wolfensperger and Jarrett Jensen not making the trip to Evanston, that leaves the cupboard a bit bare for the Panthers at 149, which is why I think we’ll see Koethe bump up and take the spot.

The other big question for UNI right away is health. Dylan Peters did not compete at The Midlands due to a knee injury he suffered at the Cliff Keen Tournament in Las Vegas last month, while Cooper Moore suffered a concussion in Evanston. I believe that Moore will be ready to go tomorrow, while the coaching staff may hold Peters out a while longer, just to make sure he doesn’t reinjure his knee to keep him out for an extended period later in the season. If Peters is out, look for Leighton Gaul to step in and take his place against Vincent Pizzuto, who wrestled at 133 pounds last season and was an NCAA qualifier.

Update: In UNI’s release on the dual they list Gual as being in the lineup, so we can assume that Peters is not 100%

The lone placewinner for UNI at The Midlands tournament was 133 pounder Josh Alber. Alber took second to fellow MAC wrestler Emilio Saavedra of Old Dominion, losing in overtime. Alber will look to get his first conference dual win of the year, and of his career, against Eagle Shayne Wireman. The junior is up a weight from last year, where he wrestled at 125 pounds.

The Eagles lone ranked wrestler comes at 197 pounds, where last year’s NCAA qualifier Anthony Abro comes back. Abro didn’t wrestle at The Midlands tournament, but has gone 15-2 on the year so far and finished sixth at the Reno Tournament of Champions after medically forfeiting his last two matches. Abro will find himself going up against Jared Bartel or Cody Krumweide for the Panthers. Krumweide went 0-2 at The Midlands.

At heavyweight two seniors will go head to head in #6 Blaize Cabell and Gage Hutchison. Cabell won their only match against each other last season, a 9-3 decision in the West Gym. For Panther fans it will be a good opportunity to see Cabell get back to his aggressive style and winning ways after a disappointing finish in Evanston.

Overall this will be a good first test for the Panthers going into the majority of their dual season; UNI will wrestle in 10 duals between tomorrow and February 19th. This dual and the dual on Friday night at Northern Illinois will be important to win if they want to keep pace with the other MAC Conference teams. Although UNI has some lineup questions, these first two duals should help settle some issues and will give us a preview of who will wrestle for the rest of the season.