Cyclones to add impact wrestlers into second half lineup 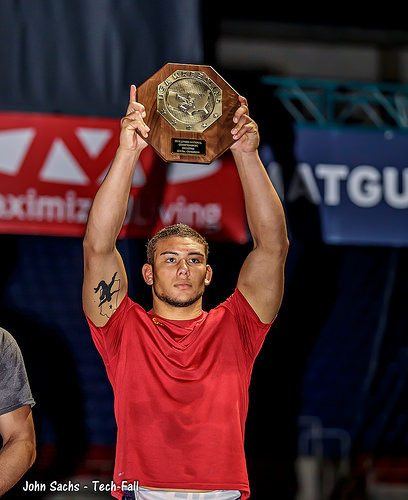 It’s no secret that the Iowa State program has struggled through the first calendar half of the season, going 3-2 in early season duals (0-2 vs ranked opponents) and a 19th place finish at this month’s Cliff Keen Las Vegas tournament. The truth is, Iowa State has metaphorically been competing with one arm tied behind their back.

Some of that can stand to change as the Cyclones could look to upgrade as many as three weights in the coming week starting with this week’s Midlands tournament where the Cyclones are expecting to see the debut of freshman Marcus Harrington at 197 pounds, and the comeback of Nathan Boston at 125.

We’ll start with Boston, who started the season with a win in wrestle offs over two year starter Kyle Larson to claim the 125 pound spot this season. Boston started his career with a tough 3-2 loss to one of the nation’s best, Joey Dance of Virginia Tech, but has now been out of the lineup for over a month and a half. Boston is definitely considered a top 20 caliber wrestler, and this weekend he can prove his might by going out and picking up a few wins over a Midlands field which will feature as many as ten top 20 wrestlers.

Harrington is another potential impact upgrade for the Iowa State lineup, and he is now expected to be back after missing the first portion of the season with team disciplinary issues and legal issues that have all been worked out. Like Boston, Harrington will have a quick opportunity to test himself as a top 20 caliber wrestler in a field that features nine ranked wrestlers, and only two of those being a top ten wrestlers. With the 197 weight as wide open as it looks on paper, Harrington will have the potential to make a name for himself quickly with a good weekend.

With Boston and Harrington making their appearances in the lineup for the Cyclones at the Midlands tournament, it does change the look and the feel of this Iowa State team. Adding two potential top 20 wrestlers into a lineup will make the Cyclones a stronger dual and tournament team, but perhaps more importantly the two wrestlers could provide a spark. With Boston and Hall now leading off the two lower weights, the Cyclones have an opportunity to build momentum that the team can feed off of.

While the Cyclones will hopefully get both Boston and Harrington to shore up 125 and 197 in the lineup, they could also be looking at getting another addition in the New Year. 2015 JUCO national champion Patrick Downey was slated to graduate from Iowa Central Community College and then compete at the Midlands tournament, but an injury has setback the timeline.

The plan now is for Downey to join the team as their starting 184 pound wrestler on January 8th, when the team heads to Hampton, Virginia for this year’s Virginia Duals. Downey is another wrestler with top 20 potential, which could further change the entire look of the second half of the lineup.