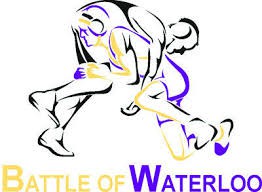 Later today in Waterloo four teams will duke it out to become the Battle of Waterloo champion, with 1A powers Lisbon and Don Bosco winning the morning session, and they were later joined by 2A’s #5 ranked New Hampton and 3A’s #2 West Des Moines Valley.

This year will go down as a historic moment as Bosco’s 28-28 criteria win over No. 1 seed Cedar Rapids Prairie became just the second time in tournament history that a top bracket seed failed to reach the finals. The feat was repeated in yesterday’s afternoon session, when New Hampton upended the No.1 seed in their bracket, Davenport Assumption in the C bracket.

It was pretty easy for both New Hampton and Assumption through the first round of their bracket, picking up 52-21 and 55-15 victories respectively. In the bracket semifinals New Hampton was able to overcome Independence 40-30 thanks to a late three run win streak. The dual started off with former state runner-up #5 Connor Cleveland (126) picking up a fall for New Hampton, which was the start of a five match win streak. Independence responded with six straight wins of their own (five by bonus) including a fall from #3 Jake Juhl at 170 and a technical fall from #5 ranked Matt Holt at 182, who each jumped a weight for the dual. New Hampton closed the dual with three straight six point victories with Mason Cleveland earning a forfeit at 106 and Dylan Robinson (113) and #1 Noah Fye (120) both scoring first period falls.

Assumption won their semifinal 44-24 against Indianola to set up the top five showdown in the finals. New Hampton’s lightweights proved to be too much for Assumption, as New Hampton didn’t lose a single bout from the 106 to 152 weight classes while Assumption claimed all of the weights 160 and up.

Clarion won a highly intriguing matchup against their former 1A opponent Alburnett 42-30 to reach the finals. #1 ranked Josh Portillo won by technical fall over #5 ranked Ben Moyer at 120, #3 Brody Brott defeated #7 Tanner Hoyer 7-5 at 145 were two of the big wins for Clarion in this dual. Alburnett freshman Jaymus Wilson continues to impress at 106, this time pinning #10 ranked Connor Johnson.

13 of Clarion’s 22 points came from their big three with #1 Justin Portillo and his brother Josh scoring technical falls, and #3 ranked Tanner Abbas scoring a decision at 138. The night’s highest head-to-head match featured Brott taking on Valley’s #3 Joel Shaprio, with the Valley wrestler coming out on top by technical fall.

The finals will start this afternoon with Lisbon, Valley, Don Bosco, and New Hampton wrestling in a four round robin bracket starting at 3:00 PM. Both 1A schools will face off in the first round giving the fans a potential state duals finals matchup between the state’s #1 and #3 ranked teams.