Skip to content
1A 2A 3A Freestyle/Greco High School womens 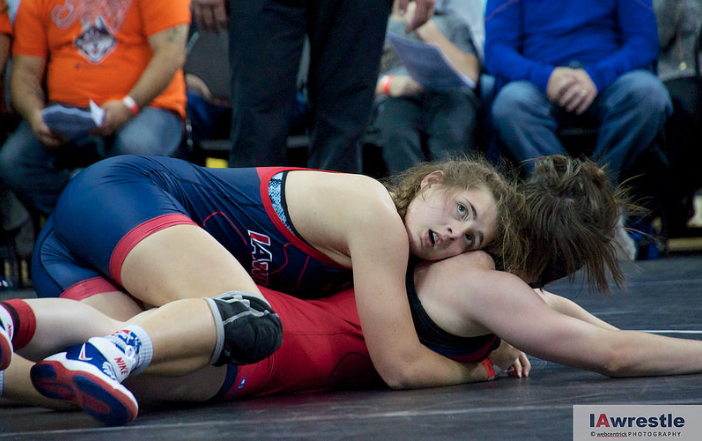 Day one of the Senior Nationals was a tough one for our Iowa wrestlers. The two competing were Megan Black of Bearcat Wrestling Club (McKendree Universtiy) and Lauren Louive of Hawkeye Wrestling Club. Both women competed at arguably the toughest weight class of the competition, 58kg.

Lauren Louive began the day with a bye which moved her in the bracket to face the #4 seed, Randi Beltz of Titan Mercury Wrestling. Louive dropped the match with a 0-10 tech fall and moved to the consolation round where she again received a bye. Her next match was against Junior World Team Member and Oklahoma City University (OKCU)/Titan Mercury Wrestling freshman, Becka Leathers who had lost to Titan Mercury Wrestling’s, Jenna Burkert in round one. Louive lost by a 7-12 decision to end her tournament.

Megan Black began the day with a bye in round one followed by Jenna Burkert of Titan Mercury Wrestling in round two where she lost by a 4-8 decision. Black moved to the consolation round and received a bye before facing Gabrielle Weyhrich also from Bearcat Wrestling Club (McKendree University). Black won with a 10-0 tech fall and moved on to face Arian Carpio of Sunkist Kids Wrestling where she lost by fall and was knocked out of the tournament.

Day 2: will include Julie Carpenter Johnsen of Waldorf College at 63kg taking on Jennifer Page of Titan Mercury.

Jasmine Bailey of Bearcat Wrestling Club (McKendree University) at 63kg will start her day against Trinity Griffin of Sunkist Kids.

Cassy Herkelman ofBearcat Wrestling Club (McKendree University) at 63kg will start off with a first round bye and take on the winner of Erin Clodgo of Sunkist Kids or Margaret Douma of OKCU/Gator Wresltling.

Rachel Watters of OKCU/Gator Wrestling will start her day at 69kg against Anna Naylor of the University of Jamestown.

A top-seven finish in each weight class will earn a qualification to compete at the Olympic Team Trials next April in Iowa City which will ultimately determine the 2016 U.S. Olympic Team.

For more information on each of the senior-level competitors from Iowa, check out our update from last week.