Fort Dodge wants to finish how they start – at the top 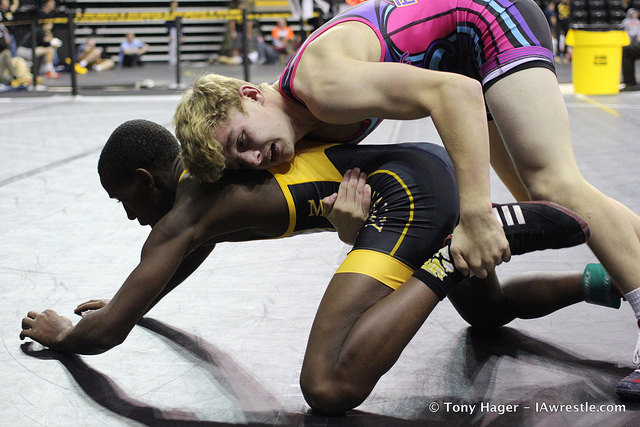 Since the 2008 season there have been a total of three schools that have won the 3A traditional team state title in Des Moines, but this year a new school will look to try and buck that trend by winning their first team title since the 1985 season. After watching schools like Bettendorf, Southeast Polk, and Waverly-Shell Rock sit atop the standings, this year Fort Dodge looks to change all that.

“I think we can win the team title.” junior Triston Lara told me. “We aren’t looking at this season like everyone is targeting us, we are looking at it like we are the underdog every time we go out there.”

This year Fort Dodge returns a lot of firepower, which includes nine preseason ranked wrestlers. Of that group six of those are returning state medalists. The Dodger lineup will feature two returning 3A state champions, Brody Teske (106) and Sam Cook (195), who are not only a top their weights in the state of Iowa, but both rate as some of the top wrestlers in the country.

“It’s nice (to have guys like Teske and Cook) who bring exposure to our program. Fort Dodge is a traditionally rich program and wrestling means a lot to our community. It’s unbelievable how many of the alumni have reached out with support to the kids in our program. So, to be able to bring a title back to Fort Dodge where we have so many loyal fans and alumni it would just be outstanding for our community.”

Also look for Triston Lara, who comes in ranked #2 at 126 pounds in our preseason rankings, to come back into the lineup after a runner-up performance in 2015 at 113 pounds. Lara had already put together a great off-season when he took out Drew West at the Conflict at Carver preseason tournament, which jumped him up one spot in IA Wrestle’s preseason pound-for-pound rankings.

“Everyday we go into the room and we push each other hard.” Lara said on his practices in the Fort Dodge room, “Everyone is really competitive so it’s never easy.”

Returning nine wrestlers who make the preseason rankings (which let me remind you freshman are not featured in our first set) speaks to the depth and developmental success of the Fort Dodge program, something coach Thompson credits to the youth program for being the reason his lineup features so many talented wrestlers, “I would attribute a lot of it to our kid’s program. That gets kids a lot of exposure on the mat. And to the wrestlers who not only put a lot of time on the mat, but in the weight room, through conditioning, and it’s all of that coming together.”

The Fort Dodge lineup will also be receiving a boost from sophomore Drew Bennett, who will look to step into the lineup at 106 pounds. Fans unfamiliar with Bennett may wonder how he earned the #2 preseason rankings after not even starting as a freshman. As we all now know, Teske’s emergence into the national spotlight blocked the path for Bennett as a freshman, but now as a sophomore he looks to be emerging as one of the top performers in the lineup.

“Drew is pretty self motivated. He has been exposed to large tournaments all across the nation and I think he knew he just had to wait his time.” coach Thompson said about Bennett, “You have to take your hat off to him. He continued to work through it, he probably put more time in and became more motivated because (he wasn’t in the lineup) and he never grumbled one bit.”

So despite the pressure of trying to bring a state title back to Fort Dodge after a three decade drought, the team remains focused on doing the right things to win the title. For some that’s not even allowing the thought of being a team favorite to cross their minds. Whatever the motivation, it is clear that while winning a title might not be the their tactic to prepare them for each match, the thought does live in the back of their mind.

“We have a really strong community in Fort Dodge and it would really make them happy to bring home a title.” Lara added, “I would love to do that too.”