Skip to content
1A 2A 3A College High School womens 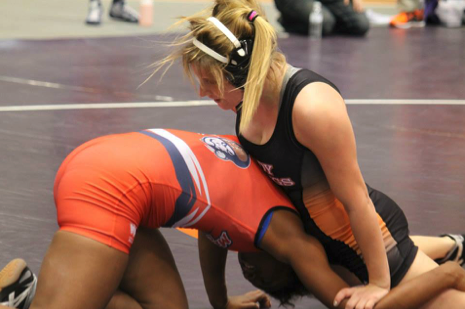 With the high school season underway and women’s college entering its second month of the season, it has been an exciting couple weeks for Iowa’s female wrestlers.

At the senior level the Iowa women are preparing for competition at the U.S. Open, December 18-19 in Las Vegas.  The women will be battling to finish in the top seven of their weight class to earn a qualification to compete at the Olympic Team Trials to be held in Iowa City, April 8-10.  This is competition at the highest level and Iowans should be proud to have the following athletes competing:

Lauren Louive of Massilon, Ohio and currently residing in Iowa City, wrestled for University of the Cumberlands in Williamsburg, KY from 2008-2013. She is a 4-time WCWA All-American and current volunteer Assistant Wrestling Coach at Cornell College (Mount Vernon, IA).  Lauren is ranked 8th at 63kg in the USA Wrestling Senior rankings (December 2nd) and is training out of the Hawkeye Wrestling club in Iowa City.

Jasmine Bailey of Iowa City wrestled for Iowa City West high school and is currently a sophomore at McKendree University.  Jasmine was a 2015 WCWA All-American taking 8th place at 136 pounds.  She also placed 4th at 63kg in the UWW Junior Freestyle Nationals (Body Bar).  She is currently ranked 9th at 136 pounds in the WCWA/Intermat rankings, (November 11th).

Megan Black of Batavia wrestled for Eddyville-Blakesburg-Fremont high school and is currently a redshirt sophomore at McKendree University.   Megan was a 2014 WCWA All-American taking 7th place at 130 pounds and is ranked 5th at 123 pounds in the WCWA/Intermat rankings, (November 11th).

Cassy Herkelman of Cedar Falls wrestled for Cedar Falls high school and is currently a sophomore at McKendree University.  Cassy was a 2015 WCWA All-American taking 5th place at 143 pounds.  She also placed 6th at 63kg in the 2015 Women’s University Nationals.  She is currently ranked 7th at 143 pounds in the WCWA/Intermat rankings, (November 11th).

Anna Poyner of New Hartford and a sophomore at Missouri Valley College (Marshall, MO), took to the mats on December 5th at the NAIA Invitational.  Poyner went 1-3 in the 123 pound weight class to extend her record to 6-7 for the season.

Waldorf College (Forest City), Iowa’s first and only college with a women’s wrestling program, traveled to Fremont, Nebraska on November 20th to take on Midland University and the University of Jamestown in a pair of dual competitions.  They lost to Jamestown 35-8 and to Midland 27-20 to extend their dual meet record to 3-7.  Iowans Illiana Bartsch of Hampton and Justice Losee of St. Ansgar did not compete.  Waldorf’s next competition will come as they host the Waldorf College Open at 9:00 a.m., January 2nd in Forest City.  This will be an excellent opportunity for fans to experience a collegiate-level women’s wrestling event.

In the past year alone, there was a 54% increase in the number of girls wrestling.  This year, there are 24 freshmen making up 38% of the total number of participants.  Freshmen and sophomores combined total 44 wrestlers, making up 70% of the total. That is a great trend and with continued growth, we may someday see the sanctioning of girls wrestling in Iowa as has occurred in California, Guam, Hawaii, Massachusetts, Tennessee, Texas, and Washington.

In our last update, we listed wrestlers by district.  This week’s update includes 26 additional wrestlers and we have them listed by weight class.  We have also included their varsity and JV records following the first week of competition.

Highlights of the week include the following varsity performances:

Alanah Vetterick of Norwalk, who was ranked 10th in the IAwrestle pre-season class 3-A rankings, picked up a 12-6 win and three pins to go 4-1 for the week.

Felicity Taylor of South Winneshiek had a first period pin and went 1-3 for the week.

Kaia Graham of Oskaloosa also had a first period pin and went 1-2 for the week.

McKinna Faulkenberry of OA-BCIG picked up two pins and a forfeit to go 3-3 for the week.

Rachel Watters of Ballard went 4-2 for the week with four decisions including a 3-1 triple overtime victory.

Here are this week’s complete results:

This coming week looks to be a busy one for our high school wrestlers.  We look forward to bringing you the latest updates as the season progresses.