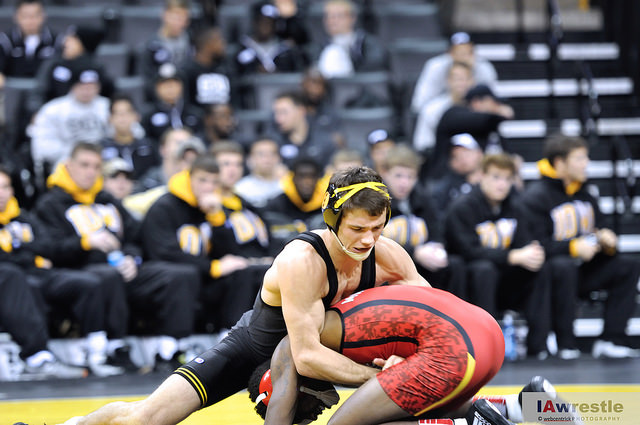 It was a mixed set of emotions tonight in the the Iowa-South Dakota State, where Iowa was able to earn a 28-15 victory in front of a crowd of 7,226 over the visiting Jackrabbits dropping three contested matches and forfeiting a fourth. It was a dual that saw both coaches get fired up over stall calls (both sides ended the dual with bench warnings), but there were some bright spots for the Hawkeyes tonight.

It comes to little surprise that one of the wrestlers with a shining performance was 125 pound wrestler Thomas Gilman, who proved to be just too much for Kahlen Morris by getting a first period fall in 1:34 to give his team a 6-0 lead they would never look back on. Joining Gilman in the pinning party was Gilman’s roommate Sammy Brooks (184), who out did Gilman by pinning Brady Ayers in a mere 43 seconds.

It was another slow start for Brandon Sorensen at 149 pounds, but he was able to pick up a bonus point victory with his 8-0 major decision over Alex Kocer. If not for a first period that saw Brandon struggle to penetrate through Kocer’s hands defense, the score might have been more lopsided. Sam Stoll was leading 4-0 in his match in the second period against former Iowa prep Alex Macki at 285, but four of those points came via stalling, and on the fifth time Macki was called, he was disqualified from the match.

Outside of that the dual was filled with some close battles. Cory Clark took out another former Iowa prep with a 4-1 decision over Brance Simms at 133, which was his closest margin of victory on the season since his 6-1 win over Garry Wayne-Harding to open the year. Clark’s former high school teammate Alex Meyer also needed an in-match comeback to score his 5-2 victory over David Kocer. Meyer surrendered the opening takedown in the first period, but was able to come on strong after the first period. It was also in the Meyer match that the Iowa coaching staff and South Dakota staff traded jabs across the mat in regards to stalling on the mat.

There was plenty of national attention surrounding the 141 match, but it was former Hawkeye Seth Gross who scored a 3-2 decision over Logan Ryan to give the Jackrabbits their first win in the dual. The score was tied 2-2 to start the final period, but Ryan was unable to secure wrist control on bottom and was rode the entire third period to lose to his former teammate.

At 157 it once again looked like Edwin Cooper was going to be able to score a victory over a ranked opponent, this time Cooper was in on several go behinds that he was close on finishing. When he finally was able to finish one he took a 5-4 lead late in the match, but once again his top mat wrestling got the better of him and seventh ranked Cody Pack came out on top 6-5 by picking up a reversal.

Luke Zilverberg got the other SDSU win by defeating Burke Paddock 4-2 in a tight 165 pound battle.

If you are wondering why Iowa forfeited 197, Brands wasn’t giving much away in the post-meet presser telling the media he didn’t have plans to say what was exactly going on with starter Nathan Burak, only that if it was a different part of the year he would have been fine to go. It seems Iowa was exercising some caution with the dual well in Iowa’s favor heading into Stoll’s match.