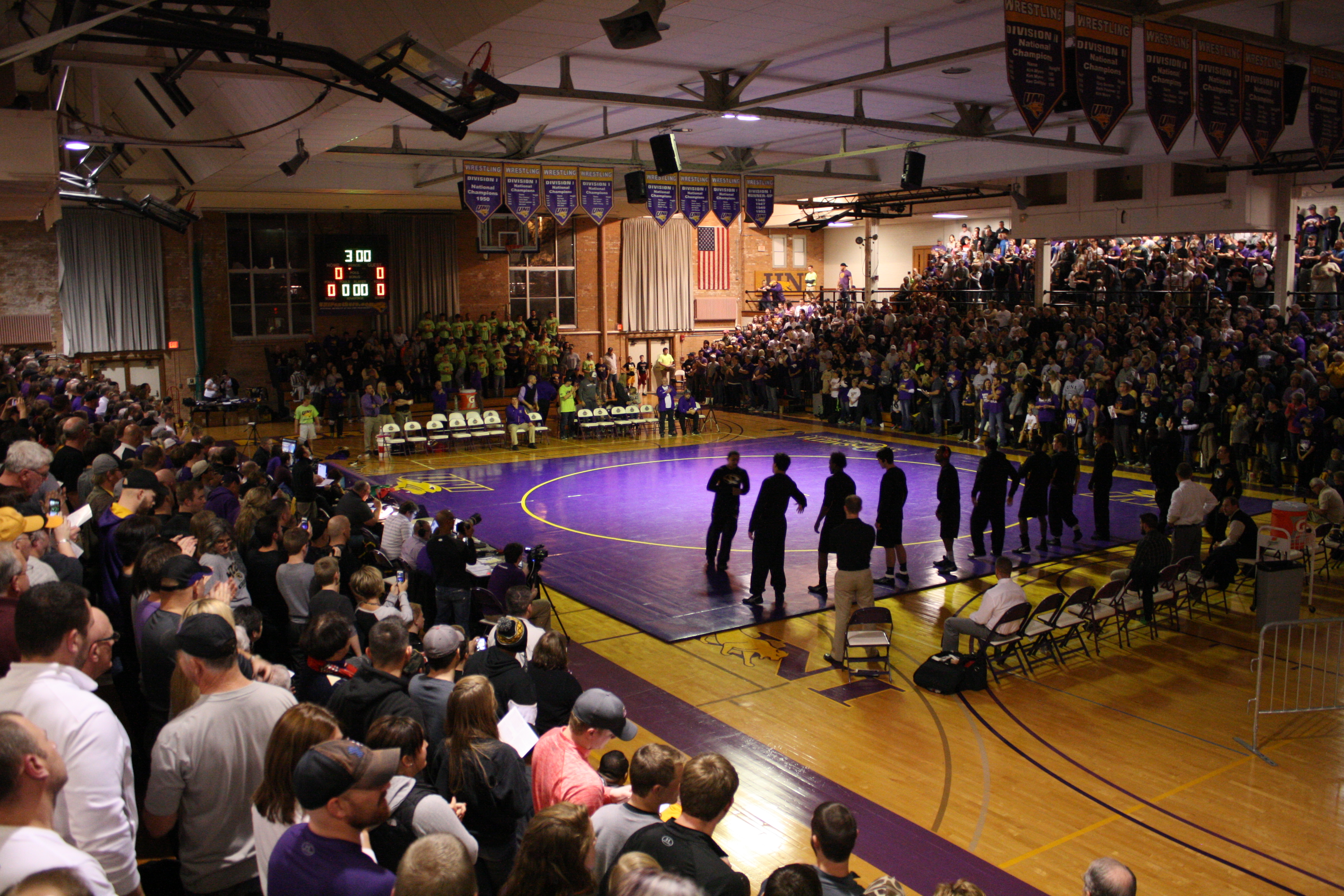 It was a disappointing opening night at the West Gym, as the UNI Panthers dropped their first home dual of the year to the Missouri Tigers, 24-19. Missouri used two pinfalls in the final four matches to come away with the win.

“Just a crazy dual, I love the atmosphere here, it’s good to bring the team here and see that atmosphere and battle through it and find a way to win,” Missouri Head Coach Brian Smith said after his teams victory.

UNI wasn’t about to give anything up though, they battled back against the defending MAC Champions. “The guys that wrestled well, wrestled really, really well. Some of those other matches, those tight matches, you’ve got to find ways to win,” UNI Head Coach Doug Schwab said. “I thought some guys looked really, really good.”

Dylan Peters came out for UNI at 125 pounder, but the lightweight couldn’t really get his offense going the way he wanted. Missouri’s Barlow McGhee kept Peters away from his body most of the match, and Peters didn’t know how to respond right away.

“He (McGhee) has got some really good counter-attacks, he’s been running through guys, especially on those counters. Dylan has to get to the body more, and create more flurries like he did, instead of one-in, one-out. That’s when he started to get through.”

Peters won the match, 7-5, on a late takedown at the end. McGhee is no scrub though, he’s scored a victory over NCAA finalist Zeke Moisey last week, and was ranked in the top 15 coming into the dual, so it’s a good resume builder – and a good experience – for Peters.

The next two matches were close battles. At 133 pounds Josh Alber dropped his West Gym debut 2-1 on riding time to Missouri’s Zach Synon. This was the third time the two have wrestled, with Synon now holding the 2-1 edge in wins.

At 141 pounds Trevor Jauch, the Missouri transfer wrestling for the first time against his former team, dropped a close 4-3 decision to Matt Manley. Jauch was in at least twice on single legs and just couldn’t finish.

Gunnar Wolfensperger was the guy at 149 pounds, and he had the All-American and number six ranked Lavion Mayes. Wolfensperger hung in there, but Mayes used his explosive double leg to beat the Panther 9-3.

That put the team scores at 9-3, favoring Missouri, going to the 157 match, when Bryce Steiert took the mat against Missouri’s Matt Lemanowicz. The battle of two true freshman saw Steiert take a 2-1 lead into the second period, when the roof was blown off the West Gym. Steiert was riding Lemanowicz when he locked up a cradle and scored the pinfall win on the edge of the mat to tie the dual at 9 going into intermission.
“I loved the pace that Steiert wrestled, that’s three minutes of extreme, high, break-neck pace. That’s how you gotta crack and open a guy. I don’t think we’re very good at playing chess, I think we’re better at playing an attack game and not a counter game.”

Coming back from break Cooper Moore saw action for the first time this season. He was scheduled for a rematch with Missouri’s Daniel Lewis, who beat Moore by pinfall last season, but Lewis was out with an ankle injury so Nick DeLoach stepped up.

“I just needed to get my elbow ready to go, every other part of my body felt good. We just wanted to make sure it’s healed up so there I wouldn’t have any problems with it later in the season. It’s just great being back in this atmosphere again.”

Moore scored the opening points of the match on a go-behind for two, and didn’t look back. He turned DeLoach several times on top to score the five-point technical fall victory, putting the Panthers up 14-9.

The next three matches didn’t go UNI’s way though. Kyle Lux lost by pinfall in 6:37 to Blaise Butler at 174 pounds. Butler whipped Lux over in the opening seconds of the match, but only scored a two point nearfall. It continued to be the former Virginia Cavalier’s match, as he would hold a 14-4 lead before scoring the pinfall.

It was a bit shorter match at 184, where former SouthEast Polk wrestler Willie Miklus turned Cody Caldwell over on his shoulders in 1:22. Miklus had a great match, coming out of the gate ready to go and kind of stunned Caldwell.

Jared Bartel was up against the 2014 NCAA champion and 2015 All-American J’Den Cox at 197 pounds, and Bartel showed himself pretty well here, scoring a takedown in the first minute of the match and never giving up anything easy. Cox went to work a little bit though, and got to his offense and then rode well giving him the 7-2 victory, and salting the dual away.

The cowed played a big factor into things (obviously), especially when the Panthers were in the matches. Everybody noticed:

Cooper Moore: “We heard the crowd getting up (after Steiert’s match) and the juices start going, the adrenaline starts going. It’s exciting. Who doesn’t want to feed off this crowd? That did take momentum going into mine (match).”

Coach Schwab: “We’ve got our home fans behind us, we’ve got a packed house on our side, there were some things we have to clear up before next week. When you get a packed house, you’ve got to put on a damn show, and you’ve got to get those people so eager next time, they’re looking at the calendar, waiting when’s the next time UNI is back in the West Gym?”

The Panthers will be in action next at the Cliff Keen Invite, December 4th and 5th. The event in Las Vegas features some of the best wrestlers in the country. “It’s a huge opportunity for all these guys, going out to Las Vegas. That’s a big, big event for our guys, that’s a way to make yourself nationally known.”

If you missed it, the video of the dual can be found below the boxscore. We’ll have the tournament results from Las Vegas, as well as a preview, so be sure to check back at IAwrestle.com!