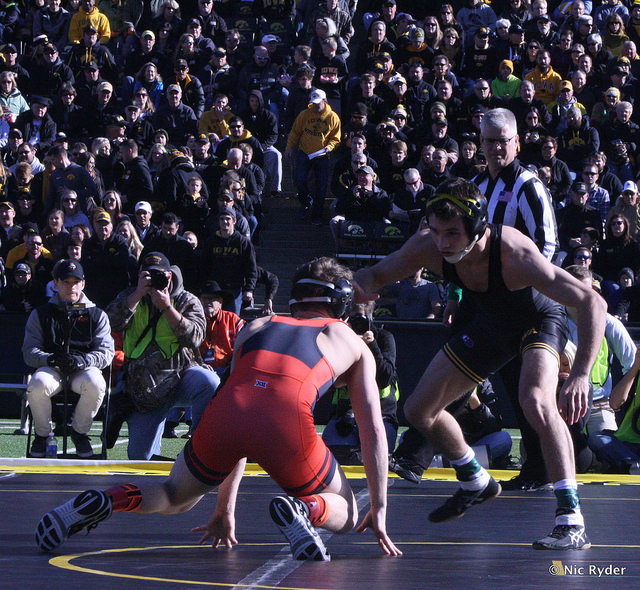 The Iowa Hawkeyes made history this weekend vs Oklahoma State when 42,287 fans headed into Kinnick Stadium at 11 AM not to watch Kirk Ferentz and the 9-0 football team, but to watch the #3 ranked wrestling program take on one of the program’s biggest rivals – #2 Oklahoma State. It was a dual that went back forth, but in the end the Hawkeyes prevailed 18-16 in the historic contest.

Thomas Gilman got things started off on the right foot for Iowa taking on the #7 ranked Eddie Klimara at 125 pounds. It has been a series that Gilman has dominated, and Saturday the Hawkeye continued that streak with a 9-1 major decision. Coming into this dual fans knew that bonus points were going to be at a premium and Gilman’s major gave the crowd some early energy. (A special shout out to Gilman for using the song, ‘Mammas Don’t Let Your Babies Grow Up To Be Cowboys’ as his walkout song)

Cory Clark followed Gilman with a 8-2 decision over Gary Wayne Harding at 133 pounds. At first it looked like Iowa was going to score back-to-back bonus wins as Clark opened to a 6-0 lead over Harding, but from there the Hawkeye tightened up and wasn’t able to extend his six point lead.One of the things Clark said after the meet was that he needs to stay with his offense more and avoid shutting it down early.

At 141 Oklahoma State got their first points of the afternoon when #1 ranked Dean Heil defeated freshman Logan Ryan 7-1. It’s a tough match to truly gauge where Ryan is at considering he was never really in on any scoring attempts of his own, and he was going up against one of the top guys at the weight.

The Hawkeyes were able to take the second of the three top ten matchups that would happen with Brandon Sorensen scoring a 6-1 decision over Anthony Collica.Considered a swing match in the dual, Sorensen built his lead with a takedown and two nearfall points on a suck back to jump out 4-0.

Edwin Cooper had one of the stranger matches on the day losing to #15 ranked Chance Marsteller 14-11. The three biggest takeaways noticed in this match were: 1) Edwin Cooper has a very nice double leg and when he can get to that shot he has the makings of being a dangerous wrestler in neutral, 2) Marsteller clearly isn’t where he needs to be in his conditioning giving up four stalling points in this match, 3) Cooper might have won this match had it not been for the mental mistakes he made in the second giving up a reversal and nearfall.

Despite losing at 165 pounds, Iowa got a win of sorts with Patrick Rhoads only giving up a major decision to the #1 ranked Alex Dieringer. Brands wasn’t satisfied speaking after the dual that he wants to see Rhoads get to his offense even though he is wrestling the #1 ranked guy.

Kyle Crutchmer was able to make it three Cowboy wins in a row at 174 pounds with a 11-10 decision over Alex Meyer at 174 pounds. Crutchmer opened with a 6-0 lead off a duck under which led to a throw and Meyer giving up four back points. Factoring in that Meyer trailed this match by such a large deficit and was able to cut it to a one point match was an incredible comeback.

With the dual on the line and his team in need of a boost, Sammy Brooks came out and lit Nolan Boyd up on the scoreboard, racking up 17 points on the way to a technical fall at 184 pounds. Teammate Nathan Burak was able to follow that up with a 5-3 decision at 197 to put Iowa up 18-13 with one match to go.

Austin Marsden was able to close the dual out with a 6-1 over freshman Sam Stoll at heavyweight, but it would not be enough to overcome the Hawkeyes.

The 42,000+ fans that packed into Kinnick smashed the old attendance record, which was held by Penn State for the last two years. While the event was considered a large success, don’t expect the Grapple on the Gridiron to become an annual event. With the weather always an uncertainty in the state of Iowa and the amount of logistics going into an event of this magnitude, it is possible to see this once every four/five years.

One thought on “Hawkeyes Victorious Over Oklahoma State/Attendance Record”