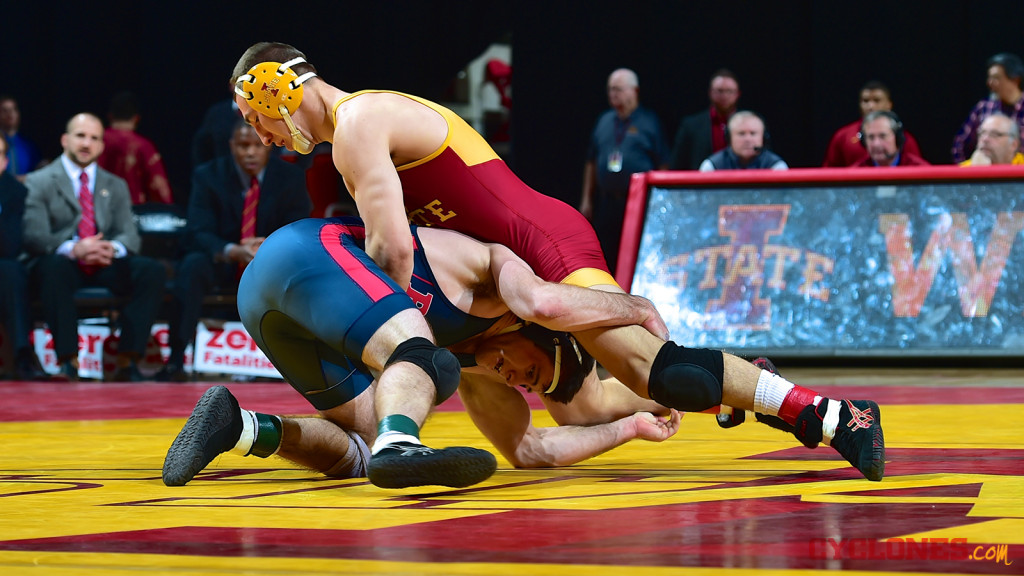 Weatherman, assuming he can make the cut after wrestling 174 for the past 4 seasons, should hold down this spot. Pushing Weatherman will be junior Carson Powell.

Tanner comes into the season coming off his worst NCAA finish to date, where he went 0-2. That alone, should be enough to keep Weatherman poised for a run. Weatherman has proven to be a game competitor and has beat All-Americans Tyler Wilps, Zach Epperly, and Kurtis Julson throughout his career. Tanner burst on to the scene as a freshman, where he defeated back–to-back seeded wrestlers to make the quarterfinals, only to drop two straight matches and fall a match short of All-American honors.

Weatherman has been banged up throughout his career, and much of his success will depend on being healthy. Tanner or “Goose” has the potential to do some serious damage down a weight class. Goose can attack from both his left and right legs, and offers a huge variety of leg attacks. His movement and motion is fluid and difficult for most wrestlers to keep up with. Tanner has taken some losses to opponents he shouldn’t lose too, and hell need to avoid that this year to keep a high seed and stay away from the top-heavy weight that is 165.

The Big 12, and 165 in general will be very top heavy with studs Bo Jordan and Alex Dieringer. Dieringer may be the best pound for pound wrestler in the country, and Weatherman will have his hands full with Alex Dieringer as will everyone else. The sky is the limit for Weatherman, who has shown to be able to beat the top in the country

174 should be manned by redshirt junior Lelund Weatherspoon. Spoon comes into the season after a 2-2 performance at last years NCAAs, wrestling hurt and up at 184. Weatherspoon has been a staple in the Cyclones lineup and should man this slot. He will be pushed by RsJR Carson Powell and several true freshmen.

Weatherspoon comes into the upcoming season with high goals. Lelund has spent quite a bit of time in and out of the low teens in the rankings, and had close matches with multiple All-Americans this past season. However, that was competing up a weight at the 184-pound slot, so one would expect Lelund to improve competing down in a more natural weight class.

Much like many wrestlers, Weatherspoon has been banged up for much of his career and staying healthy will be a key component to his success. Weatherspoon is a long and lanky wrestler, and his head hands defense is phenomenal. Additionally, Weatherspoon offers a variety of underhook series attacks and body locks that make him dangerous feet to back wrestler. Lelund really could end up high in the rankings, as six of the eight All-Americans graduated from last year, including the Big 10’s four studs that tortured the weight class for the past four seasons.

Kyle Crutchmer seems to be Lelunds main contender at the weight class. Crutchmer came on late last season and ended up earning a 5th place finish at the NCAA tournament. Weatherspoon actually owns a victory over Crutchmer however, at the 2014 Southern Scuffle while Weatherspoon wrestled 174 and battled Tanner Weatherman for the 174-pound spot. Weatherspoon should be at the top of the Big 12 and compete with Crutchmer for the Big 12 crown.

Downey should man the 184 pound spot, but questions have remained on his eligibility and when exactly Downey will be able to compete. Rumors have circulated the Downey will be eligible for 2nd semester, and may make his debut around the time of Midlands. Until then, RsSo Dane Pestano and Duke Egli are likely options for the Cyclones.

Downey comes into Iowa State after a busy 2015 season, which saw him win a junior college national championship for Iowa Central, and compete at the U.S. Open. Downey’s talent is unmatched, as he owns a World Silver Medal from the Jr World Championships, and owns victories over big names including 2x NCAA champion Quentin Wright. Questions still remain over eligibility issues, and whether or not he will take an Olympic redshirt year, in which he could qualify for.

Downey is a terrific talent, and could potentially be a huge steal and point getter for the Cyclones. Its hard to know what to expect however, as Downey was gone for two folk style seasons as he bounced from the Olympic Training Center, to Nebraska, then eventually Iowa Central. The one thing that we do know is that Downey is ultra skilled, and given the right attitude and environment could be very good.

Downey will have his hands full here with a good group of 4 guys who have wins over All-Americans and a returning All-American. Assuming Downey can live the life that leads to D1 success, you’d fully expect him to compete and win matches against top opponents.

Harrington has big shoes to fill, after 3x All-American and national champion Kyven Gadson graduates from the 197 spot. Harrington should man the spot but may have to sit out a few meets after being suspended last month. 197 is thin on the Cyclones roster and options might include 184/197 pounders Dane Pestano and Duke Egli.

Harrington comes into his freshman campaign after a redshirt season that saw him complete a 19-5 season. Harrington also got 3rd at the UWW Jr nationals, winning late in his semis match before being headlocked. Marcus was a big time recruit coming out of Iowa, after winning Fargo and the Dave Schultz excellence award.

Harrington should be a huge staple in the Cyclones lineup for the next 4 years, and will be a huge 197 pounder. Marcus has a lot of athletic ability and the 197 spot looks to be manned by a Waterloo native for 4 consecutive years. Harrington provides a variety of leg attacks and excellent defense with a tenacious hand fight. Harrington is a very physical wrestler and his freight train double is a terrific and refreshing sight. It’s hard to gauge how a redshirt freshman will adjust to a full D1 schedule and adjust to some of the grind associated with a D1 schedule. Harrington however, has high sights set and has passed the eye test so far.

The Big 12 is fairly weak at this weight, with no wrestlers that we would expect to be ranked very highly right out of the gate, and no returning All- Americans. I would expect Harrington to compete highly right out of the gate for a Big 12 title; he’s a top recruit who has already seen decent success. Iowa States upper weights have seen a lot of success under Kevin Jackson, and look for Harrington to continue the trend.

Smith should man the heavyweight spot for the Cyclones for the third straight season. Competing him with him will be senior Tyler Swope and junior Joe Scanlan.

Smith saw himself reach a 14-11 record in his 2014-15 campaign, only to be sidelined by injury for the postseason. Smith comes off a knee injury that prevented him from wrestling in the 2015 Big 12 tournament.  Smith was a big recruit coming out of high school, but missed a year of eligibility due to difficulties getting into school. Smith should be improved again this season, but needs to find his consistency.

Smith is a huge 285 pounder, with tree trunk legs and thick arms. If he can continue to improve, physically he is a threat to anyone. Much like many of his Cyclone counterparts, Smith offers some big moves that many people cant game plan for.

Heavyweight in the Big 12 is not one of the stronger weights, and should be led by NCAA All-American Austin Marsden. Quean owns a few victories over Larson, and will look to build on that. The rest of the Big 12 after the top 2 looks pretty open, and we would expect Quean to be in the middle of that.