Clark and Hall in Flo Preseason Top Five at 133 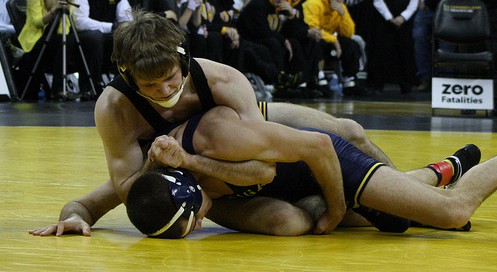 Today Flowrestling released their second preseason weight-class rankings for the upcoming 2015-16 and there are once again two wrestlers from Iowa who made the list. This was a weight that had a lot of offseason chatter with fans wondering if the 2015 NCAA champion, Cody Brewer of Oklahoma, would outgrow 133 and need to move into the 141 pound weight class. There were also some rumors swirling that Cornell All-American Nahshon Garrett would be bumping up to make room for Dalton Macri.

After a summer of speculating we got our answer that Brewer was in fact staying at 133 pound to try and repeat for Oklahoma. Sitting right behind Brewer at #2 in the rankings is Iowa Hawkeye Cory Clark. Last year Clark had an up and down season so to speak, not necessarily losing matches to wrestlers outside the top ten, as much as trading wins and losses with some of the weight’s top wrestlers. Clark will need to be a more patient wrestler in 2015-16 and work on setting up his offense to score. If he does that I think there is a very real chance he is the best wrestler in this weight class.

Cyclones Earl Hall gets the #4 preseason ranking after missing the stand in 2015. As a sophomore Hall was able to earn All-American honors at 125 pounds and then bumped to 133 for the start of his junior year. Now as a senior Hall will look to get back on top, but the top three at this weight are pretty solid. Hall hasn’t managed to crack the Cory Clark riddle, but Hall was the only wrestler to defeat Brewer in 2015, so he does have that going for him.

Overall the 133 weight is a little underwhelming when you look at the Flo rankings, but that should present a great opportunity for Northern Iowa’s redshirt freshman Josh Alber to break through the top 20. It’s not often you find all three Iowa schools with a top 20 wrestler in the same weight-class, but 133 has the potential to be one of those weights this season.