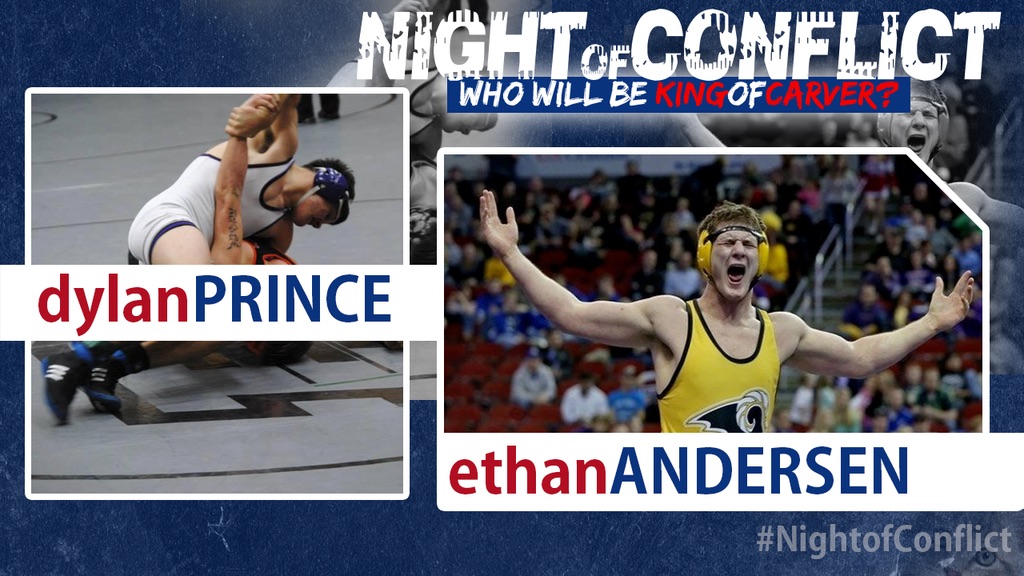 Ethan Andersen has made a big name for himself not only in the state of Iowa, but across the county over the years. He committed to the University of Missouri during his junior season of high school. Dylan Prince didn’t start wrestling until middle school but has burst onto the scene with impressive tournaments in Fargo the last two summers. Now the Kansas native gets his chance to take on the another highly ranked wrestler in folkstyle.

Andersen comes into the Night of Conflict with the better folkstyle wrestling resume with two Iowa state titles and as a folkstyle national finalist. Most of Prince’s accolades have come from wrestling Freestyle and Greco and it will be interesting to see if the pushout rule comes into play with that experience. Andersen should also have a size advantage as more of a true 220 pound wrestler. Prince will be looking to prove himself to college coaches with Iowa on his short list of schools and getting a chance to wrestle in Carver Hawkeye Arena.

Andersen on Prince: I didn’t really know who he was until I asked around about him a little bit. It seems from what I hear he’s getting good at a pretty quick rate. It should be a good match depending how I bounce back from my injury this summer.

Prince on Andersen: I feel it will be a good match and I will try to give Ethan the best match that I can.

Andersen on the Night of Conflict: I’m really excited. It’s my first dual that I’ve been chosen to wrestle in and can’t wait to wrestle at Carver. It’s one of those things you and your friends grow up wanting to do when you wrestle and live in Iowa.

Prince on the Night of Conflict: I’m glad that I was invited and I am excited to be wrestling in it!

One thought on “Night of Conflict Matchup: Ethan Anderson vs Dylan Prince”