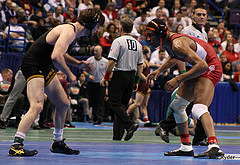 Former Hawkeye Mike Evans has been named a part of the Cal Poly coaching staff today, as the university announced that he will be joining the program as an assistant coach. Evans will join Cal Poly head coach Brenden Buckley and assistant coaches Brandon Hatchett and Scotti Sentes on the staff.

From the school’s release:

“I am very excited to welcome Mike Evans to the Cal Poly wrestling program,” said Buckley. “Mike hails from the legendary University of Iowa Hawkeye program and understands the type of commitment required to compete for an NCAA title.”

Evans recently wrapped up his career as a three-time NCAA All-American for head coach Tom Brands and the Iowa Hawkeyes, finishing sixth in each of the last three seasons. Evans also was a three-time Big Ten conference finalist, and placed third as a senior. During his time at Iowa he wrestled at both 165 and 174 pounds and was a four-year starter. Evans was rumored to be entering the freestyle circuit prior to his decision to join the Cal Poly staff.

The 2014-15 season was a tough one for Cal Poly, as they only qualified two wrestlers for the NCAA championships in Dominic Kastl and Nick Fiegener, and between the pair they only scored one team point. Fiegener is the only one of the pair that will return as he was just a freshman. One can expect that Evans will look to make a direct impact with Fiegener wrestles the 184 pound weight class.

This is not the first time an Iowa wrestler has landed at Cal Poly; most recently former NCAA champion Mark Perry served as a co-head coach through the 2011 season before he left to take the associate head coach position at Illinois.