Colon will face Ramos in Finals 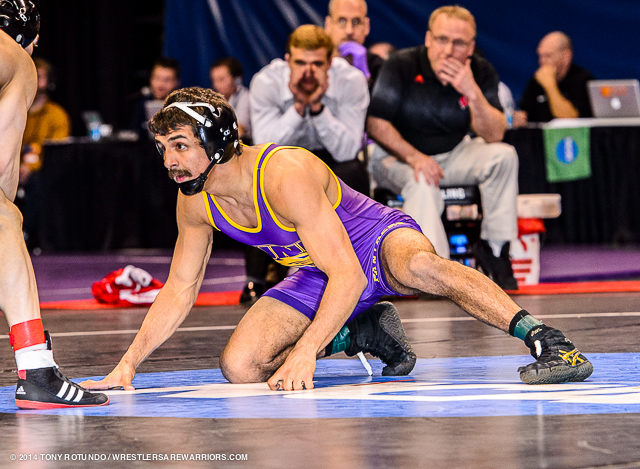 The only Iowan waiting in the finals was at 57 kg where Tony Ramos of the Hawkeye Wrestling Club waited for his challenger to emerge. Fans that wanted more of Colon-Ramos will be rewarded, as Colon battled through the challenge tournament, and will be the only two Iowans in the finals tonight.

Cyclone wrestling coach and 2013 World Team member Angel Escobedo needed a late score in his match against Tyler Graff to win 9-7 at 57 kg, after Graff had tied the match at 7-7 previously. That set up a showdown with the tournament’s top seed Nick Simmons, and after trailing 1-0 for most of the match, Escobedo hit a throw on Simmons to go out front 4-1 which was the eventual final score as well.

Joe Colon took a 4-0 lead into the second period in his first round match against Pataky, and it appeared that it was going to be a slow match with most of those points coming by pushout. All of that changed late in the second period when Colon got a body lock and took Pataky feet to back for four more points to win his first match 8-0.

Hawkeye Wrestling Club’s Matt McDonough had fireworks in his first round match with Frank Perelli. The duo exchanged leads several times, but in the end McDonough came out on top 13-8 to go on to face Colon in the semifinals. McDonough looked to be in control of the match early going up 10-1 on the former Panther, but from there it was all Colon, as he stormed back to win 17-12 to move on to face Escobedo in the challenge finals.

In the 57 kg challenge finals, Escobedo was able to use a feet to back on Colon to lead 4-1 after the first. Colon continued to rely on his strength, picking up a takedown to start the second, cutting the lead to 4-3. Colon added another takedown, and then off an Escobedo shot, both were able to trade exposures, and Colon went out to win 11-8 to advance.

At 70 kg there was a battle of former Iowa prep wrestlers between former Hawkeye Derek St. John and former UNI Panther Moza Fay. St. John struck first for a 2-0 lead, but Fay answered with four points to lead 4-2. St. John then mounted his comeback and once he re-took his lead, never let go to win 9-6. St. John then faced #1 Dustin Schlatter, where the Minnesota wrestler’s experience was just too much for St. John, as it ended in a quick technical fall.

In a battle of former Cyclone Wrestling Club teammates, Jon Reader used a pair of late takedowns to win 7-3 over Deron Winn at 86 kg. After grueling out a tough victory over Winn, Reader next faced Ed Ruth in the semifinals where to say there was scoring controversy would be an understatement. After a sequence that started at 4-1, Reader worked a series of exposures to take a 12-4 lead. After a challenge from Ruth’s corner, Reader went from up eight to trailing by one with 7-6 being the new score. After some words from Bono at the break, action resumed where the pair combined for 42 points for a 24-18 win for Ruth.

Former Hawkeye Phil Keddy got the rough draw at 86 kg getting the 2014 World Team member Ed Ruth round one, which ended in a 14-3 technical fall for Ruth. Up next we got a rematch of the AGON V event when Deron Winn and Phil Keddy faced off, but this time Winn was more dominant, winning by fall in under a minute to advance.

Aside from Colon, no other Iowa wrestler placed in today’s action.  The finals will begin at 5 PM tonight.