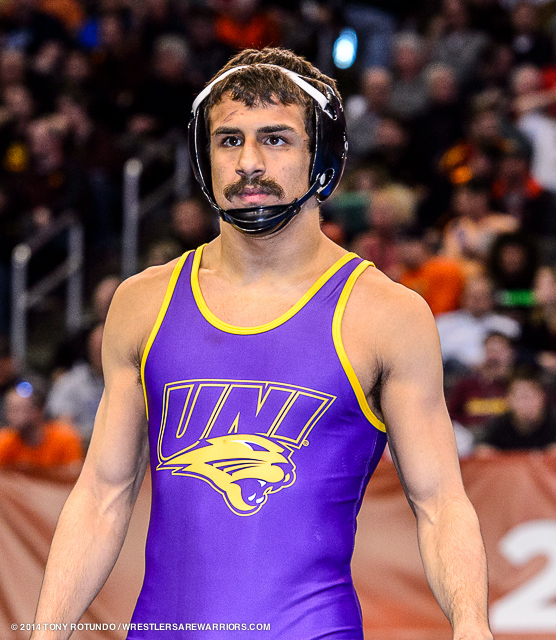 The difference is in the weight. Colon was disappointed in his outcome at the NCAA’s, and he thought he could get by at 61 kilograms (134 pounds) which was just about his college wrestling weight (133 pounds).

“I didn’t really put much effort into my diet and getting down. I thought I could do it at 61,” Colon said of his initial effort into Freestyle. While he had success there, placing second at University Nationals and third at the World Team Trials in 2014, it wasn’t the success he wanted. And there is another goal.

“You have to make a choice if you want to wrestle at the Olympics, and not that many competitiors I know are willing to give that up,” UNI Head Coach Doug Schwab said in an interview earlier this week. “61 kilos isn’t an Olympic weight, so I asked him, “do you want to be an Olympic champ?’”

And although Colon might not have thought much about wrestling Freestyle before he came to UNI – he was Greco-Roman Champion at University Nationals his sophomore year at Iowa Central – he answered his coach by changing his lifestyle, cutting down his walking weight to levels he didn’t need to in college.

“Since November I’ve just been dieting and trying to do the right things to lower my body fat and being comfortable living under 140 pounds so I can compete at 57 kilos,” Colon said of the cut.

And since he’s gone down a weight the results have gotten better. He’s avenged some losses to some wrestlers who have also cut down, notably Angel Escobedo and Matt McDonough. Getting the upper hand on those men though doesn’t keep Colon from focusing on the next match.

That’s what he and his workout partners have been doing since the beginning of the year; developing a plan. Joey Lazor spoke of the same things that Colon did when I asked them about workouts and their partners.

“The workout partners we have are great, (they’re) giving us feedback and we’re not just in there drilling as hard as we can, we’re figuring out positions and talking to each other,” Lazor said last week, and Colon echoed his statement.

“We’re learning and figuring out the small details of what works with our partners, talking back and forth and giving them a good feel and telling them what feels good and what doesn’t,” Colon said. “That helps, having those kinds of partners so you can adjust and you can remember what you’re doing in practice.”

But it’s not just the lighter weights that train together, and it’s not always the same workouts day after day that can get repetitive.

“I’m training with a bunch of different guys. We have practices in the mornings and we just drill. Sometimes we wrestle live – recently we wrestled live – just to simulate us wrestling live in the morning tournaments. A lot of times it’s just drills, and focusing on detailed skills and taking our time and learning, not just going through the motions.”

It’s not all just technical items they work on though. Colon and his partners work at full speed too, to simulate the conditions they’ll find when they’re actually out on the mat in competition.

“If I don’t practice what I’m going to do out there on the mat, who knows what I’ll be doing. If I do it half-ass in the room it’s probably going to be half-assed out on the mat,” Colon explained. “Those are big steps, especially when you’re wrestling the level of competition that we’re wrestling. You run into guys that have previously been on a world team, that have won a world medal, you’re not wrestling any scrubs.”

The men that he’ll see in the World Team Tournament are all familiar to him with a couple of exceptions. He has yet to wrestle Andrew Hochstrasser, who earlier this year was still up at 61 kilos, and Frank Perrelli, who won the Northern Plains tournament in Waterloo to qualify for the WTTs. An interesting note is that Perrelli had his closest battle of the day with fellow Panther Wrestling Club member Cruse Aarhus, who placed third at the tournament.

Colon has had success, namely a win, against every man in the field that he has wrestled, with the exception of Nick Simmons. The former Michigan State Spartan has beat Colon both times they’ve wrestled, once by pinfall and tech fall.

His coach echoed the same sentiments, or was Colon echoing Schwab? The two have a very similar way of thinking and explaining their strategies.

“Simmons is dangerous, he can gives guys fits, he’s got a good overhook,” Schwab explained. “Some positional things, don’t get too far ahead of yourself and have a game plan. They’ll be another round before he gets to him though so we don’t want to get ahead of ourselves there either. You have to stay in positions that you want to say in and be good in those positions.”

Schwab also spoke on Colon’s willingness to work hard and do the things he’s needed to over the past year to be the guy.

“(I’ve wanted to) Get him out and get training as much as possible. Things I’ve wanted to do with him, we’ve done those things. He’s doing them, keeping his head to the grindstone in all aspects. He trains hard and trains with a purpose, not just spinning his wheels,” Schwab said. “And to be the best guy in the world that’s where it takes year long processes and years long processes.”

“I came to UNI and Doug’s really got me going, I mean I love freestyle. I’m right there with the best guys, I believe, the best guys in the world. I just have to get through, punch my ticket so I can show the world.”