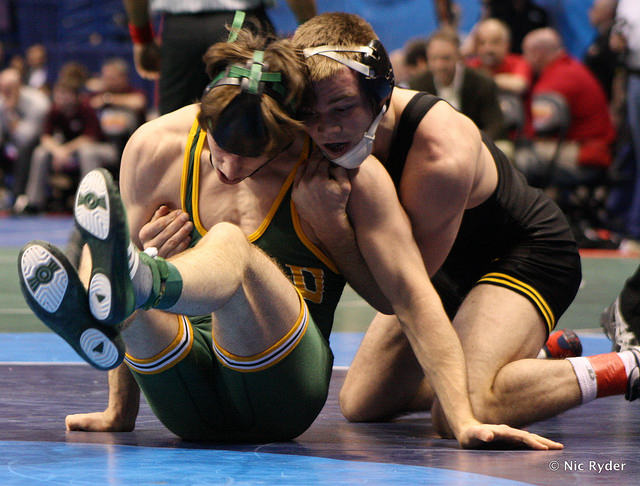 Redshirt freshmen and Iowa natives Brandon Sorensen (Iowa) and Willie Miklus (Missouri) have been named to Amateur Wrestling News’s All-Rookie team for the 2014-15 season. Sorensen is a native of Cedar Falls, Iowa where he was a four-time state champion for Denver-Tripoli high school and Miklus was a four-time state finalist for Southeast Polk high school, capturing titles at 171 and 220 his final two years.

Sorensen earned fourth place honors for Tom Brands and the Hawkeyes, finishing his season 40-6. His 40 wins was team high, and was one shy of tying Ed Banach’s single season record as a freshman. Sorensen also enters rare company as the fifth freshman to earn All-American honors under Brands, and first Hawkeye to win 40 matches since Jody Strittmatter and T.J. Williams won 40 matches in 1999. Sorensen was also the first All-American at 149 for the Hawkeyes since Brent Metcalf graduated in 2010. The freshman was also a Big Ten runner-up losing to former NCAA champion Jason Tsirtsis in the conference finals.

Miklus wrapped up his season by earning seventh place All-American honors on a fourth place Missouri Tiger team. Miklus finished his season with a 33-9 record which included a MAC runner-up finish, which led to him also earning MAC Freshman of the Year. He got off to a bang in St. Louis when he pinned the #10 seed former All-American Lorenzo Thomas in the opening round.

UPDATE: Earlier when we announced that Sorensen and Miklus had been named to AWN’s All-Rookie team, we left out that redshirt freshman Jack Hathaway was named to the second All-Rookie team, just ahead of Virginia Tech’s Kevin Norstrem. Matt Grossman was a Division II NCAA champion, which would make Hathaway the top Rookie among Division I wrestlers.
Hathaway hails from Iowa City, Iowa where he was a multi-state place-winner for the Iowa City West program under Mark Reiand. He then decided to head West to train under another former Iowa prep standout in Jim Zalesky at Oregon State, where he went 27-12 in his first official year of competition, which included winning the PAC-12 133 pound conference title.