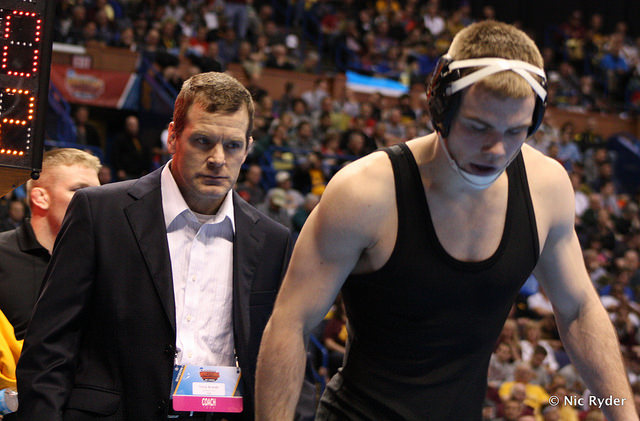 To start the season there was a lot of talk about the Hawkeye program and how they might have the most balanced lineup in the entire NCAA. Looking up and down the lineup, just about every wrestler figured to have a chance to push for an All-American honor. The biggest question would be about freshman Brandon Sorensen, who had many wondering if he would challenge Brody Grothus at 149 who was the breakout Iowa wrestler in 2014, or if he would try his chances at 157.

It was during the very first media day where the press got interaction with the athletes that we learned that Sorensen did indeed have plans to challenge at 149, a weight that he felt he could win NCAA title at. It was quite the boast from the freshman, considering the weight had spent the last four years without so much as a top eight finish from a Hawkeye, and returning starter Grothus was the first Hawkeye to qualify for the NCAAs at 149 since Brent Metcalf in 2010. If anything the media and fans were left with more questions about the 149 and 157 lineup situation for the Hawkeyes.

Sorensen was determined. Despite a third place finish at the Luther open which saw him be defeated by Grothus, he continued to challenge for the spot with Grothus and JUCO transfer Edwin Cooper, all in a three horse race. It soon became apparent that it was actually a two horse race when Cooper failed to beat either of his teammates at the Luther and Joe Parisi open tournaments.

In late December the Midlands tournament finally yielded the answer to that lingering question from early November, when Grothus sustained an ankle injury and Sorensen went on to finish third at the tournament. From there it wasn’t long before fans went from wondering if Sorensen was the best 149 pound wrestler on the roster to wondering if he was the best 149 pound wrestler in the entire country.

Sorensen put together a late comeback against then top five ranked Hunter Stieber (Ohio State), and followed that performance with a 6-1 win over returning NCAA runner-up Josh Kindig (Oklahoma State) rocketing him into the top three of rankings. A win over Jason Tsirtsis (Northwestern) would earn him the #1 overall ranking by Pyles at Flowrestling.

Sorensen continued his strong season, adding more quality wins to his resume, earning the Big Ten wrestler of the week honor on two separate occasions and later the top overall seed for his weight at the Big Ten conference tournament. Sorensen would finish runner-up to Tsirtsis, who would later beat him in the consolation finals at the NCAA tournament to finish off a fourth place finish by the freshman.

The All-American finish was significant as the Hawkeyes have had an All-American at every weight since 2010 with no more than a two year break – except 149 and 165. While Iowa has lacked an All-American at 165 pound for the same stretch of time, they have consistently had a top 10 wrestler at the weight, with Mike Evans finishing the round of 12 (a win shy of the stand) in 2012. Nick Moore picked up most of the slack Evans left, qualifying for three NCAA tournaments, and consistently ranked in the top 10.

149 on the other hand had lacked a NCAA qualifier since the graduation of NCAA champion Brent Metcalf, and it wasn’t until Grothus broke out to a fourth place finish at the 2013 Midlands followed by his win over Kindig in a dual that Iowa had a top ten ranked wrestler at the weight. Grothus was also the first time Iowa placed a wrestler in the 149 weight class at the NCAAs for the first time in three seasons.

Sorensen has now ended a four year drought of an All-American at 149 pounds, which means that 165 pounds now stands alone who hasn’t seen a wrestler put on the stand since the same 2010 season that saw current assistant coach Ryan Morningstar finished seventh on an injured knee. The second closest weight is 141 pounds, which has gone without an All-American since Montell Marion’s runner-up finish in 2012.