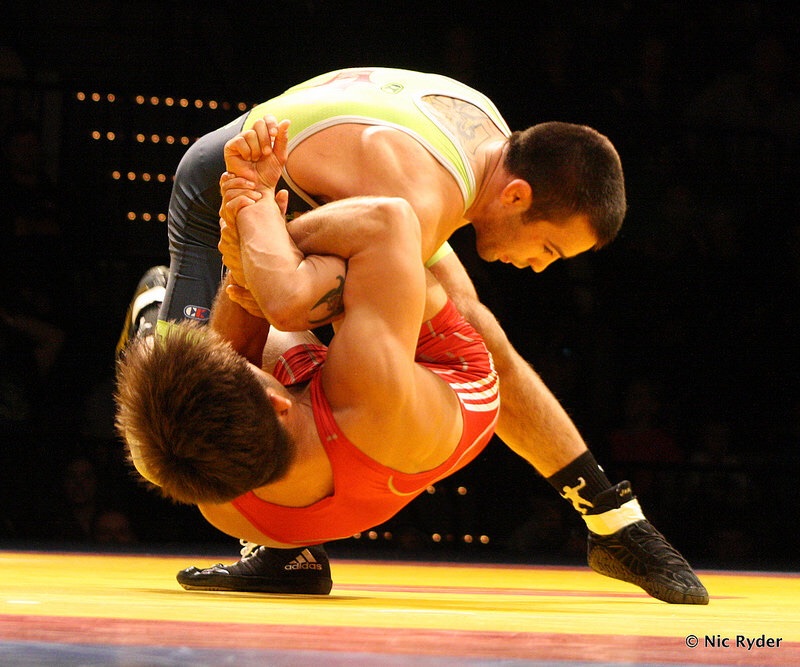 The Iowa trio stuck again as USA moved to 3-0 in pool play and will now advance to tonight’s gold medal match against either Iran or Azerbaijan. The match will be aired on NBC Sports Network 8:00 PM (Central) – check your local listings.

Tony Ramos (57 kg) did not get his anticipated rematch with Bekhbayar Erdenebat, and instead he faced Tsogtbaatar Damdinbazar . Through the first period Ramos trailed 1-0 after failing to score when he was put on the 30 second shot clock. Ramos picked up his only point in the second period when his Mongolia opponent failed to score on the shot clock. The score ended 1-1 at match’s conclusion and by virtue of criteria – being the last wrestler to score – Ramos got the victory for USA. Ramos is now 2-1 in World Cup action.

Coleman Scott (61 kg) rebounded after dropping his opening two matches and picked up his first win of the weekend. That meant for the first time former Hawkeye Brent Metcalf‘s (65 kg) job was not to stop the opposing team’s momentum, but to continue USA’s. Metcalf then upset two-time World medalist and  #6 ranked Mandakhnaran Ganzorig 8-2 to push USA’s lead to 3-0 over the Mongolian team. Metcalf is currently ranked #8 in the world at his weight, which is the highest he has ever appeared in UWW’s rankings.

Nick Marable (70 kg) and Jordan Burroughs (74 kg) each picked up wins at their weights to give the American squad a 5-0 edge in match victories which clinched a trip to the gold medal match, and secured a silver medal for the Americans.

Clayton Foster (86 kg) filled in for the injured Ed Ruth and won 2-2 on criteria and Olympic champion Jake Varner won 3-0 at 97 kg which pushed USA to a 7-0 lead and big man Tervel Dlagnev (125 kg) left to complete the sweep. Dlagnev completed the American sweep with a 10-0 technical fall.

2 thoughts on “Ramos, Metcalf, and Varner lead USA sweep over Mongolia – USA will wrestle for Gold”