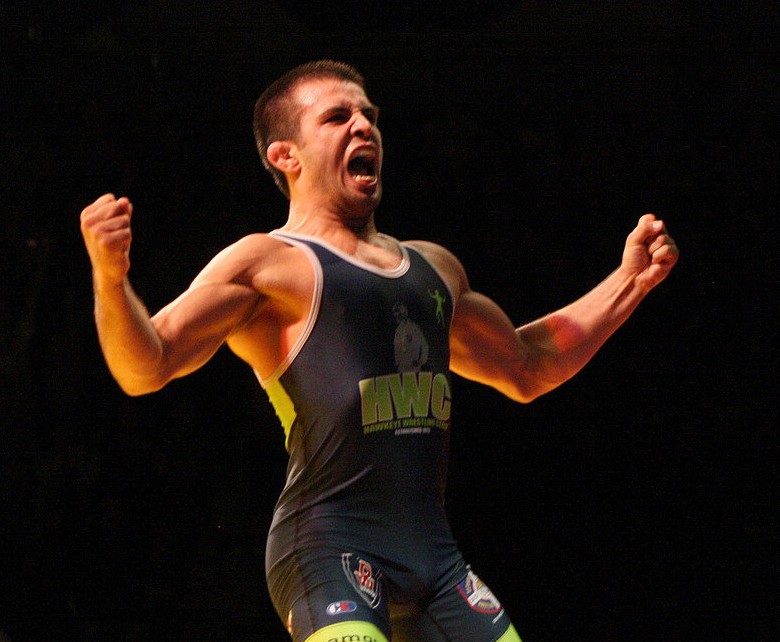 Last night at the US Cellular Center in Cedar Rapids Tony Ramos was up to his old tricks when he sent the crowd into a frenzy as he picked up a late victory score at the AGON V: Iowa Against the World event in what was one of the main events on the night. Five former University of Iowa wrestlers and three recruits who have verbally committed to all took center stage in front of a packed house and “Team Iowa” came out on top in the end.

Ramos was one of the night’s feature bouts along with his World Team member Brent Metcalf and both provided fireworks. Ramos took on one of USA wrestling’s greatest wrestlers in the past decade in 2008 Olympic gold medalist Henry Cejudo. At one point in the match Ramos trailed the Olympian 8-2, but losing was never an option for Ramos. Undefeated in Carver-Hawkeye Arena, Ramos was looking to extend his territory north to Cedar Rapids and he did it in exciting fashion. Ramos picked up a score on the edge of the mat before Cejudo needed to take an injury timeout that prevented Ramos from adding an additional two exposure points. With under a minute to go and the Hawkeye down 8-4 Ramos took a shot scoring two for exposure of Cejudo’s shoulders to the mat. Continuing to wrestle in that position Ramos locked up a cradle which would be the match clinching score.

For Hawkeye fans they got to see the signature “double rainbows” pose by Ramos as his brother, Frankie, ran to the mat to embrace him in a celebratory hug. “I did this for the fans and I did this for Terry Brands.” Said the victorious Ramos in his post match interview to the fans. “Terry Brands was always remembered for Henry Cejudo. Now, he will be remembered for Tony Ramos.”

Three-time World Team member Brent Metcalf continued his dominance of his weight class with a 4-1 victory over phenom Aaron Pico in the night’s other feature bout. Metcalf scored the match’s only takedown and also picked up an additional point for Pico failing to score on the shot clock, and another point off a penalty by Pico. After the match Metcalf fired the crowd up again as he made a jest against Pico’s pre-match comments about scoring.

AGON V also had a unique feel as three high school wrestlers committed to Iowa also competed in the event. Leading off the high school matches was Alex “The Bull” Marinelli who laid a beating on the nations #2 ranked Josh Shields of Franklin Regional. Despite training primarily in folkstyle, the Ohio native won 9-4 over Pennsylvania’s Shields. After the match Marinelli said he was glad he got the experience to compete in front of, “the best wrestling fans in the nation!”

Iowa also got first looks at California sophomore commit Justin Mejia and 2015 commit Mike Kemerer. Mejia fell at the hands of double Cadet national champion Austin Gomez of Illinois 15-8. Like Marinelli, freestyle is something that Mejia hasn’t competed in since he was in grade school five years ago. Kemerer took on “rival” and Iowa native Fredy Stroker (Bettendorf) where he scored on a late match move to win 5-4 to pick up his first win against Stroker. Prior to this match, Stroker had won the last two meeting against Kemerer taking the most recent meeting at Fargo last July.

Three other former Hawkeyes also competed in the event, as well as two Cyclone Wrestling Club members. Opening the professional card was three-time All-American Phil Keddy taking on Cyclone Wrestling Club Deron Winn in an interstate club rivalry. The last time these two met at Dave Schultz, Keddy won the first two periods, but this time Winn flipped the script and came out on top 6-3.

NCAA champion Derek St. John took on Jason Welch for the eighth time in their career with the Hawkeye winning all seven of the previous meetings. Welch was again able to buck the trend winning 12-10 and finally picking up his first win. Welch in now training full time, splitting time between Chicago where he competed in college for Northwestern and California where he trains with Pico.

Matt McDonough took on Angel Escobedo in what was a rematch of the 2010 Big Ten finals where Angel Escobedo gave McDonough his first loss in his career. McDonough and Escobedo have had an almost rematch on two occasions, but it wouldn’t be until last night, five years later that McDonough would get his shot at redemption. For the third straight match (fourth going to the high school matches) a wrestler earned a revenge victory as McDonough won 6-2 over the Cyclone assistant wrestling coach.

A replay of the entire event is available on TMWC1.com for a fee.