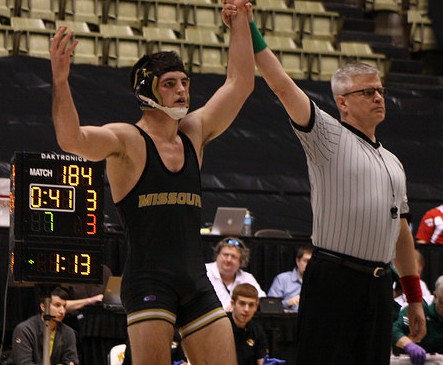 This weekend the NCAA Division I wrestling tournament will be held in St. Louis, Missouri and two-time Iowa state champion from Southeast Polk Willie Miklus will be among the field at 184 pounds for the #2 ranked Missouri Tiger squad. Missouri finished the season as the National Duals champion and qualified all ten of their wrestlers for the NCAA traditional tourney, which will have a sort of “home mat” feel as St. Louis is just down the road from Columbia where the University of Missouri resides.

You started off your MAC tournament with a fall and major decision, how important was it for you to go out and score big points not just for yourself, but for the team?

In the finals you lost a tough match with Dechow 6-4, a guy whom you had beaten earlier in the season. What was your take away from that loss?

WM: My take away from Dechow was that he’s tough and I was right there. I made a mistake and he capitalized on it. I just have to believe in myself.

You have had a couple close losses on the season to some of the top guys like #1 Gabe Dean and Big Ten champion Dom Abounder. What do you need to do to get over the hump so you can finish on the stand in two weeks?

Missouri won its third straight championship in the MAC, how important is it to have such a successful conference tournament leading up to the big one in St. Louis?

WM: Having a successful conference tournament is important because it carries confidence to nationals. We are still having fun and keeping things light and this weekend was something we had been looking forward to. So it was great to go do really well as a team.

This is the first time in a long while your competition weight has been this low. How is your weight management going and how does your body feel at this point in the season?

WM: My weight management is really good. It’s been a process and something that I just do now. It helps me feel ready when I do things right.

How excited are you to wrestle in your first NCAA tournament?

WM: I’m really excited to wrestle at nationals. I’ve watched this tournament so many times it’s going to be awesome to finally wrestle in it.

Your former high school recently captured a title of their own, is there anything you would like to comnent on their achievement?

WM: SEP titles this year were fun to see! The seniors led really well and I’m extremely proud of them. It’s fun watching as an alumni knowing that those guys are living the right way and having fun doing it! The coaches do a great job making young men.