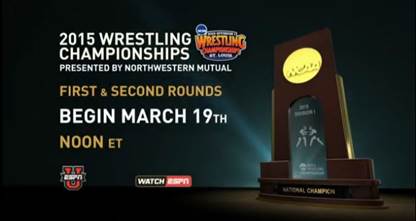 Well as they say, a tip of the hat to you ESPN – as the announcement came out today that the company often referred to as the “Mothership” will be airing all rounds of the Division I wrestling championships in St. Louis on TV through their various channels with the semifinals and finals getting primetime scheduling on ESPN. ESPN3 on WatchESPN will still carry content as ESPN has done in the past, but now fans will be able to catch coverage of the entire event on TV. So if you don’t make the trip and you happen to be out at a bar next weekend, ask the bartender to throw ESPNU up on one of the screens and share wrestling with everyone there.

*ESPN3 will have a reporter stationed at each mat providing commentary for each specific feed to further enhance the digital experience.

So not only will you get television coverage of all rounds, ESPN will also be providing commentary on every mat on the ESPN3 which will only make the wrestling product better.

“Wrestling fans have an increased fervor around the Championships each year,” said Brent Colborne, ESPN director of programming and acquisitions. “The strategy we implemented last year – the addition of the first two sessions on television, combined with our ‘every mat, every match’ component – was very well received and we are thrilled to continue with the same coverage plan.”