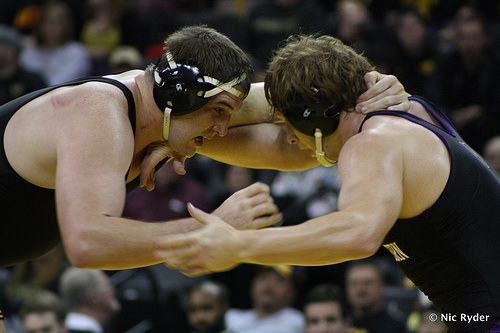 For the final breakdown I take a look at 197 and Eric wraps up our preview coverage with Bobby Telford and heavyweight.

Hawkeye Wrestler Outlook: Hawkeye Nathan Burak comes into this tournament with probably the best seeding scenario that you would’ve hoped for, and he got the #4 seed. On the plus side Max Huntley (Michigan) and Alex Polizzi (Northwestern) both ended up on the other side of the bracket, so he will face Aaron Studebaker (Nebraska) in the quarterfinals. Burak needed sudden victory to defeat Huntley and he trailed in most of his match against Polizzi before pulling it out late in the third. He is one of two wrestlers to hand Kyle Snyder – the #1 seed – a loss in college despite the circumstances in which he came by the win. Morgan McIntosh has always been a tough matchup for Burak and while he has always been able to keep matches close with Schiller, he hasn’t found a way to win yet. Having all four on the opposite side of Burak is literally the most ideal situation.

As mentioned, Snyder can attribute one of his two career losses to Nathan Burak, although it came under some controversial circumstances, since Burak was allowed to choose down twice when Snyder took injury time after the end of the first period. Burak will have to get through Studebaker, who he hasn’t faced this season, but Burak’s offense is at a higher level to this point this season than it was a year ago. Snyder vs Burak in the semifinals looks like it is going to happen and if Burak can find a way to replicate the dual result, Iowa will get a big boost in the team race (not to mention Burak getting a nice NCAA seed boost).

The former #1 high school wrestler McIntosh is putting together a really strong season taking losses only to returning NCAA champion J’den Cox and #1 pre-seed Kyle Snyder. McIntosh put some points on the board in both his Burak and Schiller matches winning 7-1 and 7-4 respectively. McIntosh is going to have a really good shot at making the finals, and will be a threat for both the conference and NCAA title in the coming weekends.

Hawkeye Wrestler Outlook: The seeds couldnt have worked out much better for Bobby Telford. Even though he comes in as the #4 seed, Telford finds himself on the opposite side of the two wrestlers that have beaten him this year (Coon and McMullan). Telford, a senior, will be looking for a strong showing at Big Tens to kick off his final postseason run. The Iowa heavyweight will be looking to make it back into the Big Ten finals for the second time in his career. He finished 3rd the last two years and reached the finals as a freshman before falling to Tony Nelson of Minnesota. Even with Telfords favorable draw he will still have a tough road to the finals. He more than likely have to go through the Penn State wrestler Jimmy Lawson in the quarters. Bobby topped Lawson 3-0 to seal a dual meet victory over Penn State at the beginning of February.

Medbery comes into Big Tens as the #2 heavyweight in the nation. He was eliminated one round before placing at last years NCAA’s. The Wisconsin junior is having a very strong season that only has one blemish so far. Medbery could face that wrestlers who gave him his only loss of the season in the semis. Telford defeated Medbery 3-1 in The Midlands semifinals. Look for Telford to make his 2nd trip to the Big Ten finals.

Mike McMullan, Northwestern (23-2) vs Adam Coon, Michigan (24-3)
Prior meeting – The pair have not met this season

Coon had a very strong regular season last year, but struggled in the postseason. The long grueling college season could have been to blame for the freshmans struggles last year. McMullan is looking to improve on a solid 3rd place finish last season at NCAA’s. The two haven’t met up this season. Look for a win by McMullan in a close match where he uses his quickness to get the job done.