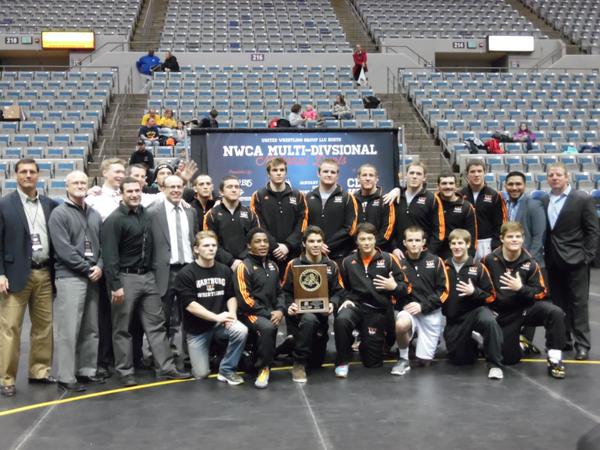 Ranked Wrestlers by Team (NWCA rankings as of February 25th):

125: Sixth ranked Jake Agnitsch of Wartburg should grab the one seed here, with a 5-3 head to head victory over seventh ranked Daniel Page (21-5) of Central.  Dubuque’s Joey Cisneros will also be a contender at the weight and could easily see Paige in the semis.

133: Luther’s fifth ranked and returning All-American Evan Obert and Wartburg’s sixth ranked Connor Campo appear to be on a collision course for the finals. Obert won a tight 7-5 overtime match earlier this year. Third place and a bid for the NCAA championships are up for grabs as there is no clear front-runner. Centrals Aaron Anderson and Augustana’s Brennan Gould could very well end up in that spot.

141: This weight is one of the toughest weights in the Central regional with three ranked wrestlers. Luther received stud transfer Drew Van Anrooy from Oregon State, who comes in ranked second with no losses to division III competition. Nick Steger from Loras also remains undefeated at 21-0 and carries the fifth ranking. Nipping at there heals is former Mason City prep and two time state champion Kaz Onoo of Wartburg. Onoo owns a 20-8 record and is currently ranked tenth. Nashid Barrow of Buena Vista also owns a stellar 20-6 record and could make some noise

149: Clackamas transfer and Wartburgs Kenny Martin is heavily favored in this weightclass, coming in ranked second and 22-3. He will likely see Cornells Trevor Engle in the finals who is currently ranked tenth and boasts a 26-7 record. Third place appears to be a dogfight between Ryan Vandall of Central and Dakota Gray of Luther.

157: This weight class is lead by fourth ranked Steven DeWitt (28-2)and 2013 All American Drew Wagenhoffer of Wartburg who is currently ranked sixth. Dubuques Brian Travis should meet one of the two in the semis, and could make some noise.

165: Coes Farai Sewera comes in as the regionals only wrestler ranked first in the country. He will be tested however with second ranked Andrew Steiert of Wartburg lurking on the other side of the bracket. Third Place should be up for grabs in this weight.

174: Wartburgs second ranked Brandon Welter leads this weight. Lurking on the other side of the bracket will be Coes Ryan Harrington (12-3) who comes in ranked tenth. Third place and an NCAA Championship bid will be up for grabs as 4 more wrestlers in the bracket come in with winning records.

184: The 184 pound weight-class may just be the toughest of the tournament, and whoever gets into the NCAA championships will have earned their bid. Luthers Jayden DeVilbiss is ranked third in the country and has wins over several opponents in the field. Ryan Sheldon of Coe is unranked, but is a wily veteran who placed 6th in the country last year. Devin Peterson of Wartburg boasts a 10-3 record, and was a highly touted recruit winning Fargo six times. Tyler Lowy of Central also has a 21-6 record, and will be right in the mix of things. Thomas Reyhons of Augustanna also poses a 24-7 record, and is a returning NCAA qualifier.

197: Gerard Roman of Wartburg and Matt Seabold of Central lead the pack in this field. They are ranked sixth and eighth respectively. Other contenders in the Central regional will include Coes returning All-American Donnie Horner and Loras Malcolm Watson.

285: Wartburgs Benjamin Nagle comes in as a heavy favorite being the only ranked wrestler in the weight class. Augustannas Jack Seaman, Luthers Conner Herman and Cornells Eric Tucker will contend.

Team Race: Despite losing nine returning starters and over 100 team points from last years NCAA championships, Wartburg comes in ranked 1st gunning for their 5th straight national championship. The Knights stick-to-it ness has consistently led them to success and they look to get ten qualifiers through. Luther, Coe and Cornell will likely fight for third place, ranked 16th, 17th, and 18th respectively. Of note, this year there will no longer be any wildcards, so you MUST place top three to get a bid to the NCAA championships.