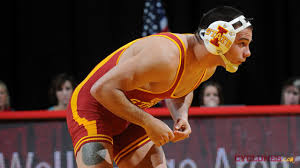 Iowa State Cyclones wrestled Wisconsin yesterday to conclude the 2014-15 dual season in Ames, Iowa. The Cyclones closed out the season by defeating the Wisconsinc Badgers, 30-16.