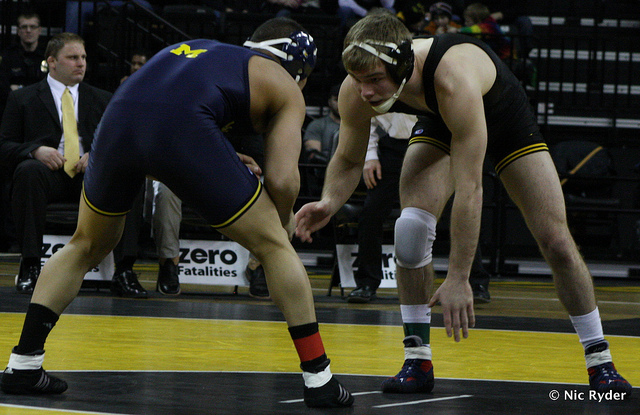 Who: #1 Iowa vs. Chattanooga
Date: Saturday February 21st, 2015
Time: 12:00 PM
Location: Iowa City, IA Carver-Hawkeye Arena
TV:Action from the Semifinals on will be featured on BTN
Radio: 800 KXIC AM
Online: BTN2GO.com will be carrying the stream
Play-by-Play: IAWrestle.com

Following their 30-6 drubbing of Virginia this past weekend, the Iowa Hawkeyes welcome seven regional winner to Iowa City for the NWCA National Duals. In their regional qualifier, the Hawks sat three of their starters (winning two of those) and still won in rather lopsided fashion. After the dual Brands mentioned that the plan was to rest those three guys no matter what, as they needed to do what was best for the athlete. Given Chattanooga’s lack of firepower in the lineup, this could be another opportunity for Brands to get a starter another match off before the intensity picks up in semifinal action.

Iowa will be overwhelming favorites in their quarterfinal – they will even be more favored than their regional dual, which their starters were favored in nine of ten matches. Chattanooga, however did just manage to upset Oklahoma in their regional, with their biggest win coming against Iowa native and #11 ranked Ross Larson in the final match of the afternoon.

Assistant coach Terry Brands was the former head coach of the Chattanooga Mocs (2002-05) where he led them to a Southern Conference title, crowning three conference champions, and two All-Americans. Following his three year stay in Tennessee, Brands left for Colorado Springs to coach Team USA freestyle.

As I mentioned in the opening this is a dual that heavily favors the Hawks, with Chattanooga only boasting two ranked wrestlers (125 and 133). If Iowa wrestles all ten starters the best matchup will be between Thomas Gilman and Michigan transfer Sean Boyle at 125, with Cory Clark vs Nick Soto close behind. Gilman got the day off against Virginia, but he is still looking for his 10th straight win, with five of the last nine wins coming by bonus. Clark has now won his last two matches by major decision after is 12-3 performance over #13 George DiCamillo.

Senior Josh Dziewa is also coming off a big win over Virginia when he defeated #13 Joe Spisak 11-1 on Sunday. Dziewa has won four in a row and is 7-2 in the new year, with his only two losses coming to Logan Stieber of Ohio State and Nick Dardanes of Minnesota.

Brandon Sorensen is riding a 14 match winning streak for the Hawks at 149, and is already looking for his 30th win on the season. Sorensen was up double digits over Virginia’s Gus Sako, when he put him away for the the fall in the third period this past weekend.

Patrick Rhoads weighed in at 165 on both Friday and Sunday, so don’t be surprised if he weighs in again (or if he gets the start in the quarterfinals). Nick Moore won 6-1 on Friday over Garrett Sutton, and then lost a tough match 8-7 on Sunday to #4 Nick Sulzer. Brands gave Moore two weeks off earlier this year, so this could be a situation where the rest has been coming. Lampe is 15-18 on the season, losing seven out of his last ten matches.

Mike Evans (174), Sammy Brooks (184), Nathan Burak (197), and Bobby Telford (285) will be large favorites in their matches against Chattanooga. Evans is just two wins away from 100 career wins. A sweep at the National Duals would put Telford one win shy of the same milestone.

One thought on “Iowa-Chattanooga square off in National Dual Quarterfinals”