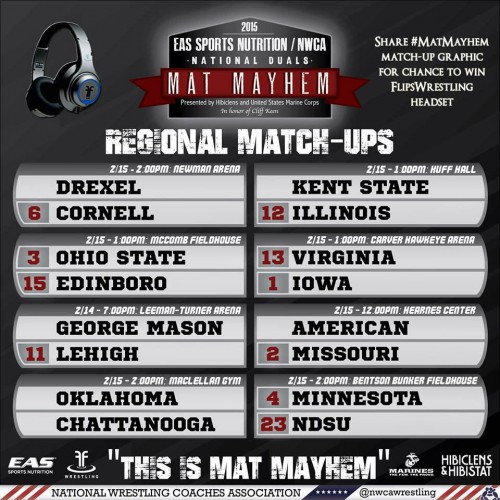 Soon the Hawkeyes will have officially closed out the Big Ten Dual season, and it’s time for them to start looking forward to their National Duals regional matchup. On February 15th eight sites will host a regional dual, with the top eight teams advancing to the quarterfinals which be held in Iowa City at Carver on February 21st. Seeding for the top eight will take place after the regional duals are completed, so we can’t look much further than the first round at this point in time.

Brands wanted Iowa to host the national duals for personal reasons, mainly with the home schedule lacking a true top rivalry, Brands hoped bringing the duals to Iowa City would give fans something to really watch.

Iowa will face #16 Virginia in a matchup that we will further dissect, but for now Nic and I take a look at the other seven regional matchups:

Drexel at #5 Cornell
Nic: Cornell has been on a roll this season. They won their 13th straight Ivy League title and hold a 68 match win streak the original eight Ivy League members. Their only loss this year has been to current #2 team Missouri, but they had some lineup shuffles back then and I think are finally all healthy. The Big Red shouldn’t see too much of a challenge in their first round matchup with Drexel. The Dragons are 7-10 overall but 4-1 in the EIWA and sit in fourth place. Drexel only brings in one ranked wrestler, #16 Kevin Devoy at 133 pounds, and that probably will be the best match of the night, as he gets #15 Mark Grey. Barring a major case of the flu or the doors freezing shut on the Cornell wrestling room, they should cruise their way to a win over the Dragons.

#3 Ohio State at #14 Edinboro
This is one of the better regional matchups, and it’s unfortunate that Edinboro got paired with Ohio State, because they probably deserve a shot at the quarterfinals. Edinboro has their big three: 133- # AJ Schopp, 141- #2 Mitchell Port, 149- #1 Dave Habat to go along with two other talented lightweight Kory Mines (125) and upperweight Vic Avery (197). Ohio State unfortunately matches up quite well at all five of those weights so the amount of damage done by Edinboro’s hammers will be less than a normal dual.

George Mason at #12 Lehigh
This a matchup where I see Lehigh winning going away. For starters George Mason will be spotting Lehigh with a 6-0 head start since they forfeit 125. Second, George Mason has zero top 20 wrestlers where Lehigh has five. There is a good chance that Brown (184) and Beckman (133) score some bonus as well. At the end of the day, I just don’t think George Mason doesn’t matchup well enough with Lehigh to give them a chance to advance to Iowa City.

Oklahoma at Chattanooga
This is the toughest regional to try and predict, but I feel confident that Oklahoma will come out on top. On paper it looks like either the Oklahoma wrestler looks like the strong favorite or vice versa. I like Oklahoma because I also think they have good bonus potential. Chattanooga’s team strength is at the two lightest weights 125 (Sean Boyle) and 133 (Nick Soto). Oklahoma however, has two pretty solid wrestlers there, and with Cody Brewer at 133 it takes one of Chattanooga’s horses out of the running if he can shut Soto down. The downside is that no matter which team emerges the victor of this dual, they will likely end up facing the #1 seed (which looks like Iowa).

Kent State at #11 Illinois
Illinois really is a team that has some strong balance now that Jesse Delgado is back. Between Delgado, Zane Richards, Isaiah Martinez, and Zac Brunson they have four wrestlers who are or were at one point ranked in the top six. Delgado’s return to the lineup was a little underwhelming, but I think that Illinois should win six of the first seven weights, which should give them the dual. Even if Ian Miller returns to form at 157 and beats freshman sensation Martinez, Illinois just has too much fire power for this MAC team.

American at #2 Missouri
Nic: The regular season MAC Champion comes into the national duals ranked second in the country, behind only the Big Ten Champion Iowa. Missouri is 20-0 this season, with a 24 dual winning streak stretching back to last year, and I don’t see them dropping number 25. American University comes in with a 2-5 record in the EIWA and a 7-10 record overall. The Eagles boast one ranked wrestler, #17 David Terao at 125 pounds, while the Tigers bring in a ranked man at all but two weights, 133 and 165. AU’s best opportunity for an upset probably comes at 133, with unranked Josh Terao taking on unranked Zach Synon, although I don’t think that’s very likely. Terao is 17-12 on the year, but Terao has no major upsets on the year, and Synon should take this one. I think this one may be even more lopsided than the Drexel/Cornell matchup, and Missouri may even get the shutout.

#4 Minnesota at #19 North Dakota State
While Minnesota is ranked #5, they are still clearly one of the best dual teams in the nation. This team matches up pretty well with Cornell and Missouri, but the problem is that I think they end up on Iowa/Ohio State’s side of the bracket (next round), which means they have an uphill battle to make the finals. I really like the direction of NDSU’s program, but just don’t think this will be a fun dual for them, even on their home mat. Minnesota has some real hammers, and those guys know how to score bonus. I think there is even a good chance Minnesota doesn’t end up wrestling all of their starters, and still come out on top. Going through the Bison Open results, Minnesota had a guy (or in some cases more than one) place higher than a North Dakota State wrestler at every weight except 184. Where Hayden Zilmer defeated Brett Pfarr 6-4 SV.