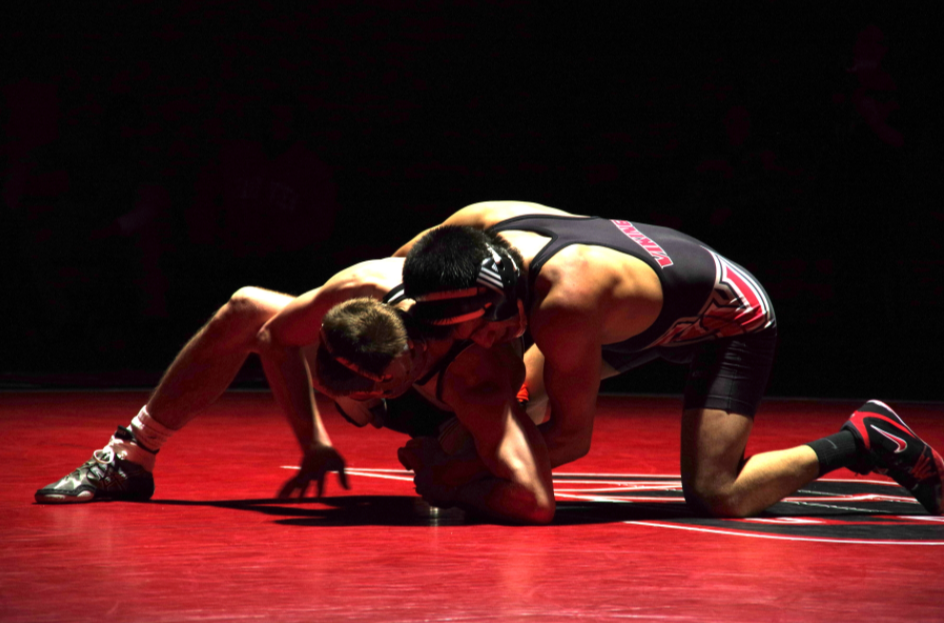 Grand View closed out its dual schedule with a dominating 41-0 victory over #15 Baker in front of a large crowd gathered insideSisam Arena Tuesday afternoon. SeniorRyak Finch got things started off with a win at 125 pounds. The marquee match-up of the night had Vikings 133 pounder Jacob Colon pitted against last year’s 133 pound national champion Bryce Shoemaker.  A reversal after Shoemaker called injury time late in the first put Colon up 2-0. Colon rode Shoemaker the entire second period and used a  reversal in the third and would keep it that way for a 5-0 decision. Seniors Brandon Wright  (141)and Gustavo Martinez (149) gave the crowd one last showing putting majors on the board: Wright winning 15-7 and Martinez dominating 13-3. Two majors at 165 and 174 from seniors Jimmie Schuessler and Thomas Moman put Grand View up 27-0.

Forfeits at 157 and 184 didn’t help the Wildcats, and neither did the tech fall that Dalton Peterson put on Billy Leone and the heavyweight match where Dean Broghammer sealed the bagels on the board with a 6-0 decision over Beau Bennett. It was a good night for the seniors who are heading into the post season with hopes of capturing their fourth title in as many years.  The Vikings will wrestle next Saturday at the Central Regional Qualifier which will be held in the Johnson Wellness Center at Grand View.