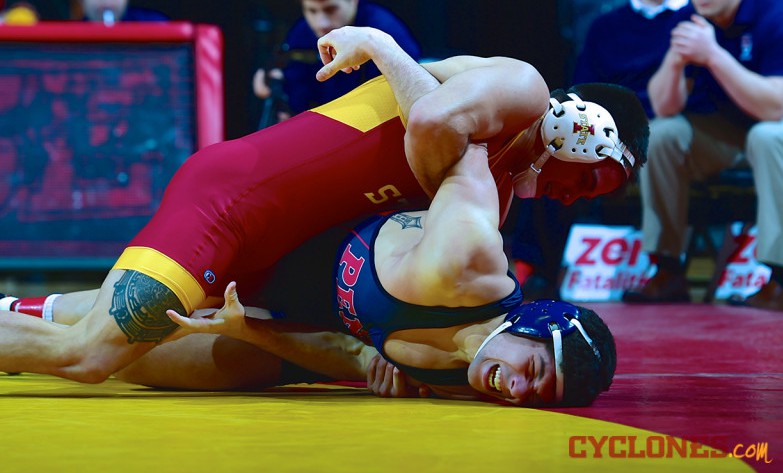 The Iowa State Cyclone return home for what will be three straight home duals and their conference tournament, meaning they don’t need to leave Ames for competition until they head to St. Louis for the NCAA championships over a month away. Coming into town is the Arizona State Sun Devils, who are now headed by Zeke Jones. A year ago Jones was Team USA’s national freestyle coach and since he has taken over he has already received commitments from top 10 recruits, and probably the best overall recruiting class.

There will only be two ranked matchups, and they will be at 149 and 184. One of Arizona State’s ranked wrestlers Christian Pagdilao arrived at his school by way of Michigan State. Pagdilao comes in with the #9 ranking so Gabe Moreno will have a tough match, but an upset would be huge as it would be his first top ten win on the year. The other ranked matchup will be between #6 Blake Stauffer and #16 Lelund Weatherspoon. The Cyclone hasn’t lost since returning to the lineup to kick off the 2015 dual season and is 5-0.

Kyle Larson will look to rebound after being majored in West Virginia by Zeke Moisey. His matchup will be against junior Ares Carpio, who is 9-9 on the year, and only 3-7 in duals. Larson is 15-10 on the year, but has lost his four matches. Larson’s last dual win came against Penn, when he majored Jeremy Schwartz, 15-5.

All-American Earl Hall will take on a transfer from Minnesota, Judson Preskitt, at 133. Preskitt is still looking for his first win, and a part of that may be that he would be better suited at 125. Hall will be a tough challenge for Preskitt, and I would look for Hall to look for bonus. Hall has now won his last 10 matches, with his last loss coming back on December, with his last loss coming from Johnni DiJulius of Ohio State in the consolation finals.

True Freshman Dante Rodriguez will look to continue his strong season against Matt Kraus, who is 13-9 on the year. Rodriguez had one of the biggest wins for the Cyclones against West Virginia when he upset Mike Morales (who is still #16 this week).

Arizona State will have no answer for the other two hammers in the Iowa State lineup, seniors #3 Mike Moreno (165) and #2 Kyven Gadson (197). With Nick Sulzer’s (Virginia) loss, Moreno moves to the #3 spot, and coupled with Hall’s move up in the rankings, Iowa State has three wrestlers ranked in the top three.

#12 Tanner Weatherman has been pretty up and down this season and coming into his last dual match against West Virginia he was coming off back-to-back upsets. Weatherman got back on track with a 15-3 major decision, and he will look to continue that momentum against Ray Waters.

Iowa State has shown that they are clearly a strong dual, so this should be a good start to a long home stretch. After Arizona State the Cyclones will have to be prepared for a quick turnaround, as Doug Schwab’s Northern Iowa Panthers will be headed to Ames for a Sunday dual.

One thought on “Cyclones vs Arizona State preview”