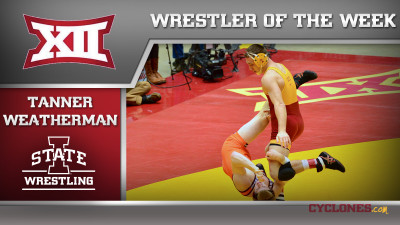 This week the third Cyclone picked up the Big 12 conference’s weekly honor for wrestler of the week. Tanner Weatherman (174) earned his honor for his come from behind victory over #9 Zach Epperly of Virginia Tech.

Weatherman was a big part of the reason that the Cyclones were able to pull an upset over the #4 ranked Hokies. The dual started at 141 where NCAA runner-up Devin Carter scored a narrow 9-8 decision over John Meeks. Virginia Tech then jumped to a 6-0 lead after a 9-3 decision by Sal Mastriani over Gabe Moreno at 149.

The Cyclones were able to put together back-to-back major decisions by seniors Luke Goettl (157) and Mike Moreno (165) put the Cyclones up 8-6 giving the Cyclones a lead they would never relinquish.

Weatherman then scored his big upset over Epperly in what was one of the main swing matches in the dual the Cyclones needed.

With the big win in hand Lelund Weatherspoon (184) and Kyven Gadson (197) added wins over their own bringing the score to 18-6 with three matches to go. Quean Smith (285) and Kyle Larson (125) each dropped decisions to their top 10 ranked opponents, and All-American Earl Hall (133) put the exclamation point on the win with  7-2 win over Kevin Norstrem.

Weatherman joins All-Americans Hall (January 6th) and Gadson (December 8th) as members of the squad who have also earned the conference honor this season.

The Cyclones will be back on their home mat this coming Sunday as one of the top ten dual teams in the nation, Oklahoma State, will come into town for another 2:00 PM showdown.