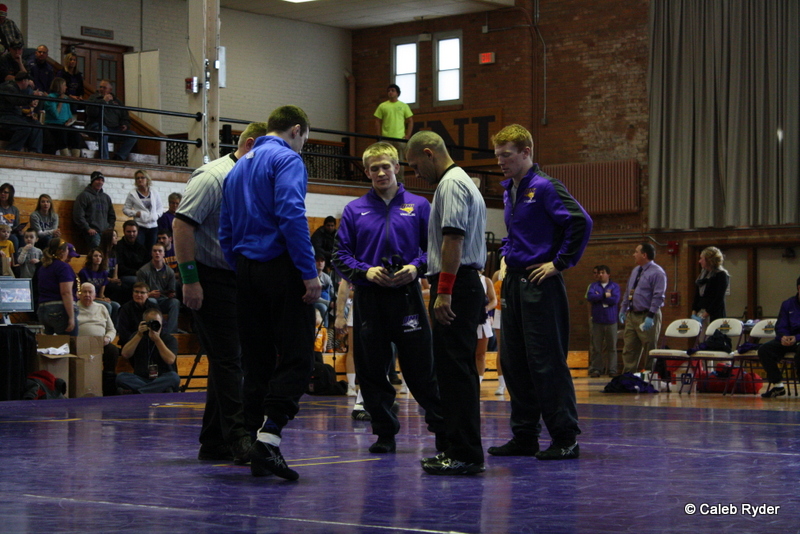 More specifically, he saw them give a doughnut to Buffalo, their MAC opponent on Saturday 37-0. The Panthers won all ten matches, scoring bonus points in half as many of those.

The Panthers got out to a fast start, with #6 ranked Dylan Peters winning by major decision over max Soria. Peters was looking for the pinfall early on in the match but Soria did a good job of keeping his defense solid. Soria had no offense to speak of though, as Peters blanked him 12-0.

Leighton Gaul really lit up the scoreboard, scoring his second dual win and his second pinfall in a dual this year, catching Sean Peacock about halfway through the third period. He was pretty well in control the entire match before the fall, with four total takedowns and drawing a stall warning from Peacock.

Jake Hodges came out strong, scoring two takedowns in the first period and then riding out opponent Rocco Russo in the second period. Hodges would get a reversal and another takedown in the 3rd to win 9-2.

The most exciting match of the day came at 149, where Gunnar Wolfensperger had to fight for a come from behind win against Justin Cooksey. Wolfensperger went down right away after a Cooksey takedown and two-point nearfall, where it appeared Cooksey had the pinfall but none was called.

“He maybe was pinned a couple times too,” Schwab said, “It was really, really close. If they’d have called it we couldn’t have disputed it.”

Wolfensperger got the escape after that nearfall and then was in on a takedown of his own, but was reversed and got two more nearfall points scored against him. In the second period Wolfensperger picked up two points from a second stall warning and locked hands on Cooksey. He also got an escape point after starting the period in the bottom position to come within two at 8-6.

In the third though Wolfensperger took control. He started the period on top and turned Cooksey twice for two, two point nearfalls in period, without giving up the escape point. Wolfensperger would win the match 10-8.

“You gotta dig deep, and he found a way to win and I think proved something to himself,” Schwab said of his 149 pounder, “That’s always a positive.”

At 157 pounds Jarrett Jensen bounced back with a nice major decision win over Alex Smythe after a disappointing match last night against Andrew Morse from Northern Illinois.

“He’s turning a corner, he’s right there and sometimes it’s just a little thing.” Schwab said of Jensen, “I’ve been talking to him for the last year and a half about how close he is to turning the corner, but you’ve got to keep believing and keep swinging the bat and he keeps swinging. You get his full effort every time and when you do that good things are going to happen.

The back half of the dual started out with Taylor Berger making his dual debut for UNI at 165. Regular starter Cooper Moore has been battling an elbow injury all year and it really hampered him yesterday against Northern Illinois.

“He (Moore) weighed in. I wanted to get him that second weigh-in and get him used to it,” Schwab said. “He’s really just learning how to wrestle with it and overcome it (refering to Moores elbow injury). Berger did a great job, he kept battling and found a way to win.”

Berger won in sudden victory, scoring a takedown on a reshot after Rrok Ndokaj took a bad shot himself. Berger looked good the entire match, although he did not score a takedown.

174 and 184 pounds saw the regular starters, Curt Maas and Cody Caldwell, win matches that they were in control of from the start, although Maas started out a little slow. Both men had a takedown in the second and third periods. Maas won 5-2 and Caldwell won 10-7 in a match that was not that close.

Check out our photo gallery from the dual on our flickr page!

The Panthers are in action again next Friday night at home against #6 Virginia Tech at 7PM in the West Gym, we’ll have our preview up against the top ten team later this week.