Dieringer bumps up a weight – will face Sulzer at #NWCAClassic 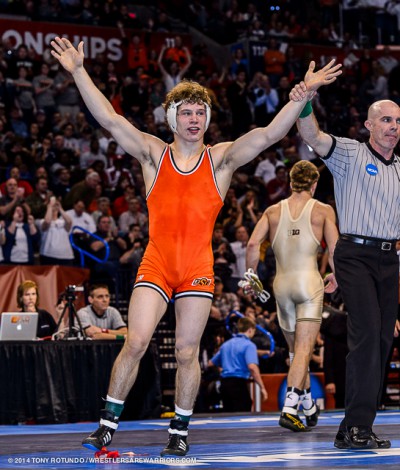 Last March Oklahoma State wrestler Alex Dieringer won his first title at 157 defeating Dylan Ness, now he will face a new challenge as he tries to change weights and tackle the 165 class. His first test will be none other than our #1 ranked wrestler, Nick Sulzer of Virginia. Obviously this will be the first meeting between the pair, but it may not be the last as many ranking services have these two as the top duo in this class.

Much like Kindig, Dieringer will have the opportunity to face both Iowa and Iowa State. He should meet #7 ranked Nick Moore on January 11th in Stillwater for the annual non-conference dual between the two teams. As for Iowa State’s #3 ranked Mike Moreno, he will have a chance to face Dieringer at both the Southern Scuffle and their home dual in January. Many expect Dieringer to have the same amount of success he had last year at 157, but when the state of Iowa boasts two top ranked wrestlers, the possibility of an upset still remains an outcome.

As for Sulzer he could face all three Iowa wrestlers. Iowa State and UNI’s Cooper Moore (#10) will get an early season chance at upsetting Sulzer at the Cliff-Keen tournament, and Moreno could have another opportunity at the Southern Scuffle. Virginia will also be traveling to Iowa for the National Duals in February, so a meeting between Nick Sulzer and Nick Moore seems inevitable.

With seeding implications for March on the line, a win over either wrestler will be a nice chip to cash in on to cash in on in St. Louis.