Tsirtsis and Kindig will square off at 149 in the #NWCAClassic 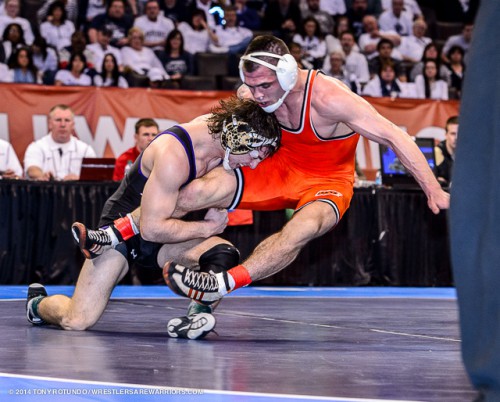 It looks like Northwestern will have it’s second participant at the NWCA All-Star match as returning NCAA champion Jason Tsirtsis will look to face the man he had to beat to win his first title at the event. Tsirtsis needed overtime to notch his victory over Kindig in the finals, and many are expecting round two to be just as entertaining.

The only Iowans that will face Tsirtsis this year will be whomever Iowa sends out at 149 (which figures to be freshman Brandon Sorensen, junior NCAA qualifier Brody Grothus, or possibly junior transfer Edwin Cooper) and they could meet a couple of times. The Midland tournament, which is hosted by Northwestern will present the first opportunity for a Tsirtsis-Iowa match, and given that returning starter Brody Grothus picked up a win over Tsirtsis at the tournament last year, it will be interesting to see if the Iowa starter can replicate those results. Of course if not, Northwestern is set to dual Iowa on January 23rd, so with a tournament and dual scheduled wtih Northwestern we could see multiple guys face Tsirtsis from Iowa.

Kindig will have an opportunity to face the Iowa 149 starter on January 11th in Stillwater when the two teams square off for their annual non-conference dual. Kindig will also have a chance to face Iowa State’s starter a couple of times. The race for Iowa State is expected to be between 141 NCAA qualifier Gabe Moreno, and two time 149 NCAA qualifier Luke Gottel. The Cowboys and Cyclones will dual in Ames on January 25th, but they will also be at the Southern Scuffle to kick off 2015, and a matchup possible matchup could happen out East.