The Hawkeye Wrestling Club is doing some big things 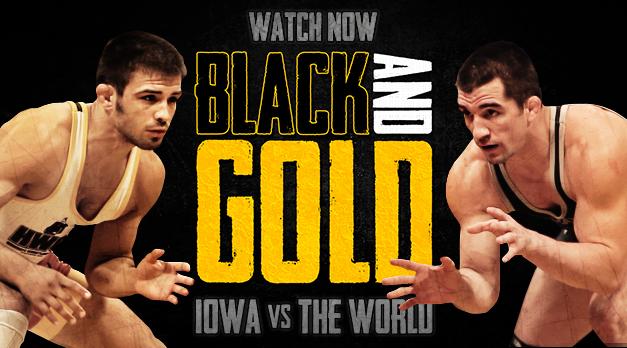 The Hawkeye Wrestling Club, and the University of Iowa wrestlers that affiliate with it, has had a really great 2014 to this point. They have placed four different wrestlers on a World Team, been featured by Flowrestling, and have even gone as far to add a new element that has been missing.

The Recovery of Matt McDonough

The things Matt McDonough has done for the University of Iowa in a Hawkeye singlet have to be one of the all time great accomplishments for an Iowa lightweight, and that’s saying something. McDonough came out of Linn-Mar high school in Iowa and shocked the country when as a redshirt freshman he made the Big Ten and NCAA finals, coming away with a title in the latter. Fast forward to the end of his college career where he was a twotime NCAA champion, and a four time Big Ten finalist. The bad news however, would be Matt’s final trip to the NCAAs where for the first time he not only didn’t make the finals, he didn’t make the stand. Later we would learn that a shoulder injury slowed McDonough, though he would tell you that it was no excuse for him missing the stand, or winning a title.

After taking some time off to recouperate, Matt came back as to compete for the HWC (Hawkeye Wrestling Club) at 61 KG. Roughly a weight class up from his college days. “I think the time at 61 KG was beneficial to me and helped me take a break from the weight control side of things,” Matt said in an interview with us earlier this summer, “but now that I have made my return to 57 KG that’s where I plan to be.” McDonough was referring to after spending almost a year up at 61 KG transitioning to freestyle, he has finally made his way back down to his college weight.

While we appear to have a new version of McDonough on the mat, he is very much the same at the core in how he competes. He still goes out with his high intensity, and pushes the pace in the match to wear down opponents. McDonough dropped down to 57 KG for the World Team Trials after a 4th place finish at the US Open in Las Vegas.  It was at the trials he would place third, by taking out Nico Megaludis in the third place match to earn himself the right to challenge for Team USA’s World University spot against Nahshon Garrett.

McDonough did indeed beat Garrett and earned the 57 KG spot, which led to him competing at the World University Championships in Hungary. It was in Hungary that McDonough earned the first peice of hardware for the HWC, bringing home bronze with his only defeat the then #4 ranked 57 KG wrestler in the World.

Having a healthy Matt McDonough back in action pushes the talent level at Iowa back toward the top. McDonough has experienced a wealth of folkstyle success, and is well on his way to making a name in freestyle.

The Emergence of Tony Ramos

It is hard to believe that Tony Ramos came out of nowhere, but in the freestyle game it’s not exactly common to go from college, to World Team Member in the same year (even though two guys did it this year), but that is exactly what Tony did. After finally getting the monkey (Big Ten title) and the gorilla (NCAA title) off his back, Ramos came out ready to light the freestyle world on fire, by dropping down to 57 KG. On how Ramos has been able to transition so well to freestyle from college, “I wasn’t on a clock running out of time to achieve a lifelong dream. In the Olympics and Worlds you can wrestle as long as your body holds up or you want to. It’s not four tries and you’re done forever.”

Without the burden of only four chances at a NCAA title, Ramos has immediate success, taking out former World Team wrestlers Angel Escobedo, and Sam Hazewinkel to earn his spot at 57 KG. One thing that Ramos has been perfectly clear on are his intentions for the World Championships, “You see interviews. You watch Simmons, Hazewinkel, Escobedo, all they ever talk about [is] winning a medal. They’re satisfied with winning a medal. If you think I go overseas and just bring back a bronze or a silver and be satisfied? You’re wrong. It’s about winning a gold, it’s not just about winning a medal.”

It’s that kind of bulldog mentaility, that the HWC needs to help push this program back to the top. Tony Ramos truly believes that he is the best 57 KG wrestler in the World, and he also believes that Iowa is truly the best place in the world for a lightweight to train. The crazy thing is, Ramos shouldn’t even have to say that about Iowa, it should be obvious. When there are four World Team members that train in one room, all of whom wrestle under 150 pounds, lightweights should want to come to Iowa to continue that legacy of guys like Brands, Schwab, Zaddick, and now Ramos and Metcalf.

Brent Metcalf is Wrestling at his Finest

Brent Metcalf has been part of the foundation of the Hawkeye reemergence. After Iowa was experiencing a long drought in team titles, the University decided to switch directions and brought back Tom Brands to head the program. One of the wrestlers Brands brought with him was Metcalf, who was one of the most sought after recruits during his high school days. After sitting out a year due to transfer restrictions, Metcalf entered the lineup and took the NCAA by storm, making the NCAA finals all three years, and winning two titles. During that stretch the Hawkeyes were able to three-peat in the team title race, and brought new life to the black and gold faithful.

So when Metcalf started his international career of course he chose to stay in Iowa City and train with the men that made him one of the best college wrestlers of his time. It was a rough start for Metcalf, who even though he made a few World Teams, he was never able to do real damage on the international scene, as most of his success came within the United States. It wasn’t until 2013 that Metcalf started his dominance winning the Sargsyan International and making the World Team for the first time since 2010.

The rule change by FILA (no scoring resets, and two-three minute periods) seemed to immensely benefited Metcalf, as this year he cruised through the Las Vegas Open, blanking opponents 39-0. He then went on to win a big match against the now #1 ranked wrestler at the Beat the Streets event in New York, and later won two matches against Jordan Oliver to claim his third World Team spot. After winning three matches at the Gran Prix in Azerbaijan, Metcalf broke through the rankings, and now finds himself in the middle of the pack at #11. It appears that Metcalf is wrestling in his prime, as just one of those accomplishments would qualify as having success this year. With Metcalf primed and ready to go, he gives the HWC the complimentary piece it’s been needing. Ramos reminds me of a younger Metcalf, determined and never satisfied, even in a win. Now Metcalf, who is getting toward the back-end of his career, is playing the role of the cool and collected veteran.

Thomas Gilman is another reason that the HWC is really thriving right now. While Gilman is not an actual part of the HWC he still get’s grouped in with those guys. Gilman recently made his second Junior World Team at 55 KG by thwarting Ohio State’s Nathan Tomasello in a best of three finals at Junior Trials. After claiming his second consecutive Junior World spot, Gilman went on to compete at Croatia’s Junior World Championships bringing home yet another world medal to the club. Gilman’s lone loss was in the semifinals, and he rebounded strong to win the bronze medal, adding to the impressive day for Team USA, as all four wrestlers for Team USA earned medals. Gilman, along with former Junior World member Sammy Brooks show that there is even more successful wrestlers coming through the pipeline.

Others are taking notice of HWC’s success

Flowrestling’s Christian Pyles said it the best when he wrote his article that the HWC is the King of 2014 as they placed four wrestlers on to a World team. The next best being the Cliff Keen Wrestling Club with three (Adam Coon – Junior 120KG, BJ Futrell – University 61 KG, and Jimmy Kennedy – Senior 61 KG). While a one wrestler margin seems small, when you are talking only 30 World spots to be had, having over 10% of Team USA’s World Team wrestlers is quite the accomplishment.

It is probably because of that accomplishment that Flowrestling went on to do a series that specifically features the Hawkeye wrestlers, in a new series that was released this week titled ‘Black and Gold‘. In the first episode that was released we got to see some of the wrestlers have fun playing some wiffle ball, but also got a chance to get inside the Senior wrestlers’ – Ramos and Metcalf – minds and see what makes them tick, and their thought’s leading up to the World Championships. You do have to pay to see it, but think of it like you are going to the movie theater. You pay $20 and you get to see some quality content. And there is more than just the ‘Black and Gold’ series, along with other series Flo has done (‘Pico’, ‘Obsessed’) they also have the Tony Ramos series and Mark Perry Driven series. It’s not like we get kickbacks from Flowrestling, so just know if I am plugging it, I truly believe it is can’t miss Hawkeye content.

A missing factor that the HWC had been missing is strong Greco-Roman talent in the room, and in one recruiting class, Tom Brands has brought in two of the bright young stars in Greco. The first being Burke Paddock, the second being Sam Stoll. Both have excelled in the high school Greco-Roman ranks, and Stoll has even done fairly well on the Senior level.

Paddock ran through his 160 bracket at Fargo’s national high school tournament last month, while Stoll had a bit tougher time, but also claimed the HWT Greco title. Stoll has also wrestled in both Junior and Senior level events, bringing home second in Junior’s behind Adam Coon, and fifth in the Senior level at the Las Vegas Open. With young Greco wrestlers in the Iowa room, it gives some of the wrestlers a chance to cross train and better themselves. If they are constantly working with wrestlers who think or wrestle only one way, eventually their potential to get better will reach a limit. If they are able to have multiple guys in a room, who have a mastery of multiple style (at their age level) they start to learn and grow as a wrestler. It is the same reason you don’t have all your coaches who were former lightweights, or why maybe having a defensive wrestler on the coaching staff isn’t a bad thing. Eventually a wrestler will run into a an opponent who is a defensive guy, or maybe they rely heavy on their throws. If a wrestler has had an opportunity to see that kind of style of wrestling before this particular matchup, it can increase their chances of winning.

Right now it appears the HWC is doing all the right things. They are putting wrestlers on World Teams, they are two for two in World medal opportunities, and they are continuously looking for ways to improve and make themselves better. With Metcalf and Ramos taking the mat in Uzbekistan next month, they will look to push their medal count to four, hopefully they are both gold in color.