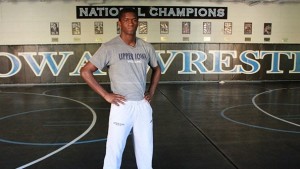 Former NJCAA national champion and NCAA Division II runner up has tweeted that he is headed to Iowa City to compete for the Iowa Hawkeyes.

Will be wrestling at University of Iowa this year! Iowa City bound ! #NoTimeForExcuses

This is some good news for Hawkeye fans as this means the Cooper has gotten his past troubles straightened out. Iowa fans were hopeful last summer when they thought he could fix their 149 troubles since World Team Member Brent Metcalf had graduated. While Cooper never stepped on the mat as a Hawkeye Iowa solved it’s 149 problem with Brody Grothus emerging, and had promising Brandon Sorensen waiting in the wings while he redshirted. If Cooper is indeed headed back to Iowa City, he would likely be headed to try and fill one of 149 or the recently vacated 157 spot.

Cooper won his NJCAA title at 149 for Iowa Central, and then finished second at 149 for Upper Iowa this past year at the Division II championships. The University of Iowa has not yet confirmed that Cooper will be joining the program, but BHGP’s article from last year stated he would have three years of eligibility, so it stands to pretty good reason that Cooper would still have two years left to compete for Iowa. More on Cooper and the 149/157 situation to come when the announcement if official.

One thought on “Edwin Cooper is headed to Iowa City”