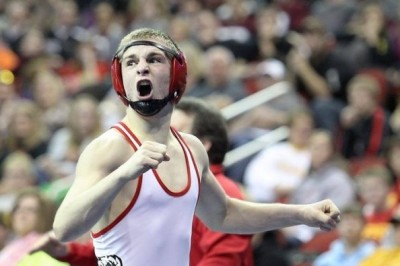 Next week four Iowan high school wrestlers will look to claim glory for the United States, as the Cadet World Tournament will get under way in Snina,Slovakia. Iowa will be sending two wrestlers in each style, with Carter Happel and Jake Marnin qualifying in freestyle, and Drew West and Ethan Andersen competing in Greco-Roman.

The lightest Iowan competing will be Drew West at 50 KG. Drew won his first state title for Highland-Riverside this past February with a 6-1 decision over Justin Portillo in the finals. Traveling to Akron, Ohio for the Cadet National championships West took 6th behind his brother Bryce in the freestyle competition, but with a three technical fall performance (the other win being 7-0) Drew qualified to wrestle in Slovakia. If you want to read more about the West brothers you can do so here.

Lisbon’s Carter Happel will be competing at 58 KG in the freestyle class. Happel captured his second state tile this past season and knocked off another two time state champion in the process. Carter also was nice enough to speak with us, and give us some insight into his Cadet tournament. After taking a loss to Corey Shie, Carter needed to rebound, and rebound he did as he laid a 12-7 beating on his opponent in the finals. Happel is also the highest ranked Iowa junior (for the upcoming season) in Flo’s rankings checking in at #7 at 126. Just watch him go to work in this video.

Ethan Andersen had a pretty wild ride winning his Greco title over a top ranked Jordan Wood in the 85-100 KG weight class. Andersen had a dominating 49-0 high school season enroute to his state title, and currently sits at #17 at 220. Ethan is a great kid, and after seeing him take out one of the best 220 the USA has to offer, I think he is ready for the world competition.

The final wrestler Iowa boasts on Team USA is heavyweight Jake Marnin. Marnin has already made a name for himself by dominating American competition to earn him the #2 heavyweight ranking behind only Illinois’ Michael Johnson. Marnin was close to being on both the Greco and freestyle team, but a 9-2 loss to Tate Orndorff ended that dream. Marnin also happens to be a high school teammate of Andersen, as both wrestle for the nationally ranked Southeast Polk squad.

Cadet Worlds will be taking place starting Tuesday the 15th through Sunday the 20th.