The Hawkeyes are taking over the Airwaves 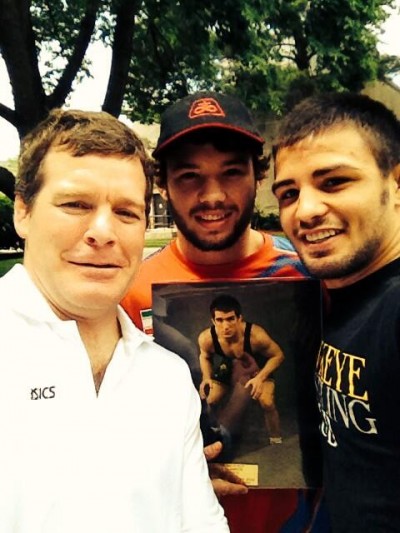 Last week we got to listen to Jason Bryant interview both Tony Ramos and Brent Metcalf on his ‘Short Time’ podcast, and the legend Dan Gable was on 1650 AM’s ‘On The Mat’ with Kyle Klingman. This week has almost been just as good.

Yesterday Tony Ramos was on the Cedar Rapids radio station KGYM 1600 AM to talk a little wrestling with ‘The Afternoon Player’s Club’ with host’s Todd Brommelkamp and Tyler Ryder. If you follow the link above it will take you to the shows podcast of yesterday’s program, and if you fast forward to the 33rd minute you can catch the Ramos interview.

A few highlights from the interview:

The first great line comes when Ryder asks Tony about a quote he made at media day last year before the season started. The quote was to the effect of Ramos saying that he didn’t want to be remembered as the best Hawkeye to never win a NCAA title. How does Ramos think he will be remembered now? “Someone who came out and put everything on the line. A real emotional wrestler, who liked to have a lot of fun. And in the next couple months, I hope they remember me as the guy who won a Big Ten title, a national title, and a World title all in the same year.”

This is the kind of attitude and response we have come to expect from Ramos over the years Iowa fans have watched him compete. For the fans that didn’t really know Tony Ramos, he made his intentions very clear when after the World Team Trials he told fans in an interview that he is not satisfied with just making the team, he wants to win a gold medal.

Ramos went on to discuss the importance that the Brands brothers have had on him. Stating no one is better at helping him in freestyle than Terry, and that the brothers have helped strengthen his mentality that you always should push yourself, and never be satisfied with finishing second. Ryder then went on to ask Tony’s thoughts on being named Iowa’s male athlete of the year (he is also up for Big Ten athlete of the year) to which Tony said, “It was a great honor. They could have picked James Morris or Devyn Marble, who are going professional in their sport. You know wrestling doesn’t have a professional level, we only have the Olympics.”

It was a good interview from the champ, and it get’s even better when you find out that Tony is out in LA right now..for his bachelor party. The whole interview takes about eight minutes so if you have time give it a listen.

The final note is that Brent Metcalf will be joining KGYM today on the ‘Gym Class’, which airs from 3:00-4:00 P.M. with hosts Scott Unash and Mark Dukes. You can listen on the radio in the Cedar Rapids area on 1600 AM, 107.5 FM, or 106.3 AM. Or you can follow the link to their website to listen. If you get off work early enough the ‘Gym Class’ will be live on location at the Coaches Corner Pub in Iowa City and you can actually listen live. Wrestling is always looking for ways to spread the word about the sport, which is why I would advise that if you can make it out to the Coaches Corner, please do so. KGYM does a good job of getting guests like Tom Brands and Mark Ironside on the program and the best way to keep them talking about wrestling is to show them that there is an audience that is listening.

One thought on “The Hawkeyes are taking over the Airwaves”