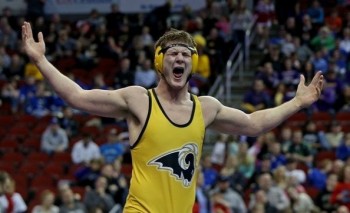 Continuing with our series of getting to know Cadet National champions, this week we get to know Southeast Polk’s Ethan Andersen. Ethan competed in both freestyle and Greco-Roman in Akron, and it was in Greco that he earned his title and spot on the World Team. I caught up with Ethan after he got back from a wrestling camp in Missouri. I asked Ethan what kind of things was he working on in Missouri and he responded, “Wrestling with college guys and I spent some time with my friends William and Timmy Miklus, and Jayden Cox.”

Before Ethan was dominating Cadet Nationals, he was dominating kids in Iowa. After a 6th place finish at 195 as a freshman, Ethan bumped up to 220 and entered the Iowa High School State tournament an unblemished 45-0. Scoring two first period falls Ethan was entering his semifinal against another top prep Gannon Gremmel (who is currently the #10 ranked 220 pounder by Flowrestling). Ethan met the challenge with his usual method, by making sure he was the victor. Ethan won by fall (5:35) and went on to win his first state title with an 18-7 major decision. “I know I have a long way to go. I feel I am no where close to my full potential.” Ethan said, referring to what keeps him so motivated. “I want to be ranked #1 on Flowrestling, wrestle for a Division I college, win a national title, and participate in the Olympics.”

Winning the Cadet Greco title wasn’t unexpected for the soon-to-be junior as Ethan wrestles for one of the premier Iowa high schools in the Southeast Polk Rams, and he is one of the horses on that team. The Rams currently boast two current University of Iowa wrestlers, Alex Meyer and 2014 All-American Cory Clark, and also features three nationally ranked high school wrestlers. Nolan Hellickson – #11 at 120 – and Jake Marnin (also a World Team Member) – #2 at heavyweight – join Ethan in the national ranks as he ranks #20 at 220. “We push each other as teammates. It makes everyone better.” You certainly can’t argue against the young man there, as the Rams lineup featured six wrestlers ranked in the top three in the state rankings going into the tournament. Ethan loves to give his teammates credit, as he did with one of his workout partners Jake Marnin, “Having Jake on the team has definitely helped to improve my Greco style.” It is obvious when you have a Cadet freestyle and Greco national champion on the same high school team, that these two feed off each other.

It was a little disappointing to see Andersen drop in the rankings, as Flowrestling initially had him ranked as high #9 when they did their first rankings without the 2014 senior class as you can see from this post we did last month. Despite the fact that Ethan did not place in the freestyle tournament, his 4-2 victory over #1 ranked Jordan Wood in Greco-Roman in my opinion should have kept him higher, but in the end rankings are just a number, we all know how talented Ethan already is. “I was able to get an early lead (against Wood). I wrestled smart and I was able to hold on to that lead for the win.” Seeing how motivated Ethan is, and knowing his goals, I don’t think it is out of the question that he could be the #1 ranked wrestler at his weight nationally by time he graduates from high school.

“Ethan is a hard worker, and all about wrestling. We felt a lot of pride (when Ethan won his title), and even a little bit of disbelief as well. It was amazing. It is an honor to watch him compete.” said Laura and “Beef”. “My dad, aka Beef, is my biggest supporter.” Ethan said.

This leads us to the Go Fund Me page for the Andersen family, who are looking for donations to help offset the costs of traveling to Slovakia for the World Championships. All donations would be greatly appreciated by the family, and as fans we have the opportunity to fuel this young man’s dream.

If you haven’t go ahead and get to know Carter Happel (Go Fund Happel) and Drew West (Go Fund West), and lets show all three of these young men the support that the wrestling community has for them. That link for the Andersen page again is : http://www.gofundme.com/9mkt2w. Let’s fuel the dreams of these young men!

2 thoughts on “Getting to Know World Team Member Ethan Andersen”