Digging Into Dan Gable’s ‘On The Mat’ Comments 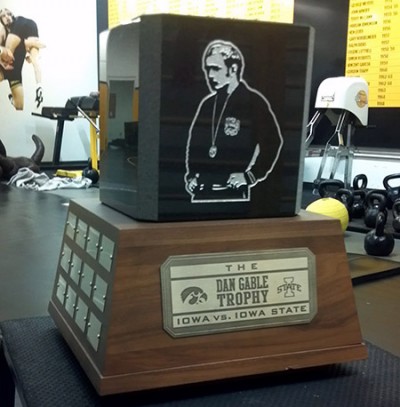 Last week former Cyclone and Hawkeye great was on 1650 The Fan in Waterloo to discuss his thoughts on a variety of wrestling topics on the radio program ‘On The Mat’ with host Kyle Klingman.

Starting the interview off Gable stated his intention for wrestling, to be the same level where basketball, football, and baseball is. Which is obviously the dream that all wrestling fans would like the direction of the sport. Getting it there on the other hand will be another matter.

Gable spoke on what wrestling needs to do to get to that next level on the radio show. “A little bit clearer understanding on what it (the sport) is. Most sports are pretty clear, putting a ball in a goal, getting a ball across a line.” Gable says that wrestling struggles based on the fact that it’s not always so cut and dry in our sport. Wrestling has a more subjective element to it. For instance scoring back points on occurs when the referee deems that a wrestlers shoulder blades have broken the 90 degree plane. “It’s not easy to understand to the mainstream….which has hurt us with sponsors.” Gable concluded.

Gable was able to briefly mention a benefit to wrestling that gives it a leg up on other sports. “Wrestling doesn’t need padding, we just have a garment that is kinda…out there.” Of course the garment that is ‘out there’ is the singlet which has led me to wonder what do you think about the singlet? Is it time to make a change or are you deeply rooted with the garment? If you are for the change leave a comment down below on what sort of change you would prefer.

Gable makes an awesome point though in this interview about how the fact that wrestling is not a collision sport. In a world where world class quarterbacks like Joe Namath and Brett Favre are worried about the consequences of playing America’s most popular sport, turning to a sport that doesn’t have the same amount of violence can be a great alternative. That’s not to say wrestling is a zero risk sport, after all we saw Virginia Tech’s Devin Carter tear both hamstrings earlier this past season, but when it comes to concussions and long term mental effects, wrestling certainly has the edge.

Gable had a few more good thoughts at the end of the program.  On Tony Ramos and Brent Metcalf making the World Team he had this to say, “I’m excited about getting some medals, and I like gold medals… Just making the team doesn’t set too well with these guys.” He went on to praise Ramos’ performance in Madison, and was pretty happy that Hawkeye Thomas Gilman made the Junior Team, and Matt McDonough trying to make the University Team. He summed up that anything that bring attention and all the success that these guys have will help raise the program back up to the pinnacle of college wrestling.

Gable also had some nice things to say about what Coach Jackson is doing at Iowa State calling him a winner, and also that Coach Schwab in Cedar Falls is bringing UNI back into relevance. His final thoughts on wrestling were related to Jordan Burroughs having a shot at John Smith’s record, which was 6 straight World and Olympic titles. Gable said that Burroughs is obviously on track, and if he get’s that record, it will be because of David Taylor and Kyle Dake. Those two wrestlers make sure that Burroughs is training year round and that he never can take a day off because it only takes one mistake for a guy of that caliber to beat him and end his dream.

All-in-all I really enjoyed the interview with Gable so if you haven’t listened to it first hand I would suggest that you do so as there were some elements that I wasn’t able to address.

A couple other bullet items to get to: