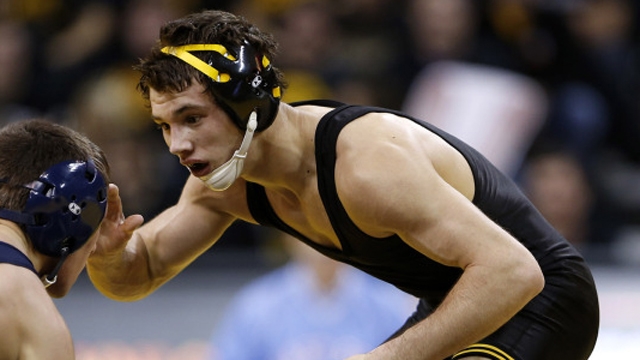 A look into the 2014-15 Hawkeye lineup. I know we are eight months away from the start of next season, but I thought we could take a look now, and then revisit this post next fall. While I realize Gilman and Brooks spent a good chunk of the season at the weights they will be competing at next season, but they will officially be first year starters. Also, we have seen what Clark could do at 125, but any time you go up a weight there is an adjustment.

125- Thomas Gilman – We start where Iowa loves to start duals at, 125. Iowa will feature Thomas Gilman who in his redshirt freshman campaign he only managed to knock off a two time defending NCAA champion enroute to his first Midland title. The usual starter Cory Clark was able to return at the end of the year to wrestle the conference tournament and nationals, but make no mistake Gilman is ready for his shot. As it was apparent in quite a few matches, Gilman’s main strength will be in his ability to ride opponents tough. He was able to hold down Delgado at Midlands, and he was able to win a tight victory over Nebraska’s Tim Lambert by riding him to earn his riding time point to win that match 2-0. This will not be an easy weight for Gilman, even with his previous success this season. None of the All Americans at this weight graduated (though Cork Clark and Earl Hall are most likely bumping to 133 after this season). To add to all of the All American talent returning there was also other Big Ten freshman standouts Lambert of Nebraska, Ryan Taylor of Wisconsin – who defeated Clark for 3rd at Big Ten’s this year, Conor Youtsey of Michigan, and junior Josh Martinez – a top five ranked wrestler – will also be returning. I like Gilman’s chances of making the podium since he is good in the top poisition and is pretty good offensively from his feet. If Gilman can improve his defense in neutral, Iowa fans can hope to see little to no drop off from Clark, with a chance of scoring even more points at this weight.

133- Cory Clark -Gone will be one of Iowa’s important cogs in the lineup, Tony Ramos. Ramos was a three time All American in a Hawkeye singlet, but Brands thinks he may have found just to person to fill that void in 2014 125 All American Cory Clark. Clark was outstanding his redshirt and his redshirt freshman season, placing 5th over in state rival Dylan Peters. Clark’s only losses at the national tournament were to eventual champion Jesse Delgado and 3rd place finisher Nico Megaludis. Clark did miss some time this past season for no known reason. He did medically forfeit out of the Midland tournament, and head coach Tom Brands made a few comments about him getting his nutrition/diet straightened out. Clark had a bit of a rough Big Ten tournament, after losing to Delgado in the semifinals, he struggled in a OT win over Ohio State’s Nick Roberts. He then faced Wisconsin’s Ryan Taylor in the 3rd place match, and Taylor proceeded to take Clark down, almost at will. What was concerning was the fact that Clark had made easy work of Taylor a few weeks earlier by pinning him in the dual season finale. Clark responded well at NCAAs by picking up a couple solid wins on the front side against Kory Mines and Tyler Cox before his loss to Delgado. He then defeated both Iowa State’s Earl Hall and UNI’s Dylan Peters to secure his 5th place finish. He will faces challenges in bumping up a weight class to 133, but thankfully five of the All Americans graduate, along with an additional two members who made the round of 12. Since a lot at the top of this weight is graduating it opens up many opportunities for new guys to make a name for themselves at this weight.

157 (or 149)– Brandon Sorensen – Making his debut in black and gold will most likely be Brandon Sorensen. He will likely be given the choice on whether he would like to compete at 149 or 157, and he spent time at both weights this season. Grothus has put himself in a situation where Sorensen going to 157 would make more sense for the team, as long as Grothus lives up to the potential he showed this season. At 149 only three of the All Americans will be graduating, but three of the round of 12 members will also be graduating. Of those round of 12 wrestlers Sorensen was able to score a 7-6 victory over Virginia Tech’s Zach Niebert at Midlands. He also won the head-to-head match over teammate Grothus 4-2 to finish 3rd at Midlands. Sorensen wasn’t able to pick up any marquee victories at 157, but he is a very talented wrestler and while I am not necessarily predicting he becomes an All American as a freshman, he definitely has the potential. With Grothus having victories over all four of the top four place finishers at NCAAs it could stand to reason that Grothus at 149 and a bulked up Sorensen at 157 could be a stronger team. However, if Grothus is unable to put it all together in a tournament Sorensen could be a potential All American at 149 and his chances of making the podium are probably stronger at the 149 weight class.

184- Sammy Brooks – Sammy already knows what it’s like to be a starter for Iowa as he did so on many occasions filling in for injured All American Ethen Lofthouse. Four of the All Americans at this weight are graduating, so that will present an opportunity for Brooks to move into the field as a contender. Brooks had a few of really impressive wins this season, a couple of sudden victories over top 15 opponents John Eblen of Missouri and Tim Dudley of Nebraska, and a 9-4 victory over NCAA qualifier Domenic Abounder of Michigan. He lost three tight matches with All Americans, runner up Jimmy Sheptock of Maryland beat him 3-2 at Midlands, 5th place finisher Kevin Stienhaus of Minnesota beat Brooks 8-6, and Brown’s 8th place finisher Ophir Bernstein defeated Brooks 10-8.

Thankfully of the four new faces in the lineup, three of them have a very impressive resume. The fourth, Sorensen, is well on his way to building a quality resume of his own. Since returning talent plays such a huge factor in determining preseason favorites, the Hawkeyes have so much returning experience that it is my feeling they will be in the top two preseason team rankings, and have a chance to be “the” favorite.

What did you think of my suggested lineup? Agree? Disagree? Do you think Sorensen and the team will be better off with him at 149 or 157? Maybe you think Alex Meyer will be better at 184. Drop your thoughts down in the comments.