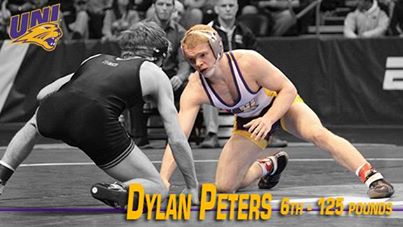 125 – Dylan Peters – Nothing can make you feel more comfortable than returning an All American at a given weight, and it makes you feel even better when you know they will be around the program for another three years. I love Dylan Peters and what he brings to the table. His style is so aggressive and the amount of bonus points he scored this season makes a guy feel all warm and fuzzy on the inside.

To face some cold hard facts, this weight looks really brutal. The NCAA champion and runner up will be back, as well as the 3rd place finisher who is also a two time finalist. I said before NCAAs that I thought Joey Dance had a chance to be something special, and that he was one of my picks to upset Delgado. I was wrong about the upset, but right on the money about him being something special. Dance, along with Clark*, and Darian Cruz join Peters as sophomores who are returning All Americans at this weight. When you factor in that Tim Lambert (Nebraska), Ryan Taylor (Wisconsin), and Josh Martinez (Air Force) are all coming back at this weight as well, it’s pretty obvious to see it won’t be easy to make the stand again. That said Peters’ ability to score bonus points make him a huge asset for team points, and a nightmare for opponents to match up against. Right now it’s too early to tell whether Peters will take the next step and join the likes of Delgado, Megaludis and Garrett in that upper tier of the weight class, but he is certainly capable. I definitely think he will win his second MAC title next year, it’s what he does above and beyond that is what has me so excited.

*Well maybe Clark will return at 125 or it will be Thomas Gilman, who has a pretty good record against Peters to this point in their careers.

133 – Levi Wolfensperger – here is another lightweight Panther to get fired up about. Levi was recruited as a 125 and unfortunately, I believe he had issues staying down at 125 and being effective. The plan was for him to go to 133 until Joe Colon was brought into the fold. I used to go to the West Gym and would regularly see Levi and Bonin during individual work outs and I remember watching Levi during a particularly intense work out and coming away very impressed. What impressed me even further is that because he couldn’t go at 125, and 133 was occupied he jumped up to 141 and was able to shock everyone (including me) by earning an NCAA autobid by winning the West Regional Conference title as a freshman.

As a sophomore he was starting for the suspended Joe Colon and went 26-10 finishing second in his conference tournament earning another autobid. At NCAAs he finished one win shy of All America honors. A ton of 133 talent is graduating: Jon Morrison, Tony Ramos, Tyler Graff, Ryan Mango, and David Thorn. It’s easy to see that the door is open for Levi to make the stand for the first and final time in his career. He will give UNI a fantastic 1-2 punch at 125 and 133 like they had this season.

141 – Adam Perrin – Perrin maybe making his debut as a junior into the Panther lineup coming off a 16-6 season. He will have his work cut out for him next season as Old Dominion will be returning Chris Mecate – a guy who spent the better part of the season ranked in the top eight – and Central Michigan will be returning a top 15 wrestler Zach Horan. Perrin looks to take a lot of lumps this season in conference competition, but he has a chance to be a solid middle of the pack MAC wrestler.

149 – Tyler Patten – would be my best guess to be the starter for next season after Schwab gave him the nod for the Panthers at the MAC tournament. Patten was able to pick up a win over his in state rival Luke Goettl in their dual in February, and finished his season 19-16. Patten was just a freshman this season, so he has a chance to go to the next level now that he has a year of varsity experience under his belt.

Two other names in the room to watch at this weight would be Tanner Hiatt and Gunner Wolfensperger. Hiatt was able to pick up an early season victory over Patten, but finished the season with only 12 matches going 8-4. Gunner didn’t have many matches either this season going 7-6, but both could make a push for the 149 starting spot.

157 – Jarrett Jensen – This is the first wrestler in the Panther lineup who did not attend high school in Iowa. Jensen had a rough season finishing 8-16 after a solid freshman year in which he went 17-16. Jensen was able to pick up one victory at the MAC conference and finished one win shy of placing at the tournament. I believe he spent part of the season dealing with an injury so maybe with a full offseason to recover he can come back refreshed and ready to go for his junior season.

Cedar Rapids Prairie product Zach Witte has the best chance of pushing Jensen for his starting job. Witte was the #80 recruit from that 2012 class so he does have some potential. Witte posted a 13-7 record in this year with no conference wins.

165 – Cooper Moore – Is the second of two freshman from this year’s squad that really produced for the Purple and Gold. A top 100 recruit out of Minnesota, Moore hit the ground running when he defeated 3rd place finisher Steve Monk in his first competition of the year. He capped off his fantastic season with a MAC title and picked up one win at nationals as the #10 seed.

There is a lot to like about Cooper Moore going forward, for starters five of the eight All Americans will be graduating at his weight. Additionally three of the members of the round of 12 will also be graduating opening some room up for Moore to earn All American honors. Moore probably won’t face a whole lot of competition in the MAC conference, so more than likely he will have to make a name for himself in the early season open tournaments and if UNI decides to attend Midlands again, make a run there to make an early statement. Moore will be one of the staples in this Panther lineup going forward.

174 – Cody Caldwell – Cody is coming off a pretty decent season in which he finished 17-15 in which he saw some improvement from last season, but there is clearly still some work to go. Caldwell surprised some when he put together a 4th place finish at the MAC conference tournament to earn his first NCAA berth. He made the most of his first trip to nationals by defeating the #8 seed and fellow conference opponent Cody Walters (Ohio) in the first round before losing his next two matches and bowing out of the tournament. It was a season in which he saw improvement in both his conference and national tournament from the previous year.

What to expect from Caldwell going forward is still an unknown. While his first round victory over Walters was an encouraging sign of optimism for the the future it should be taken with a grain of salt. I would like to see Caldwell build off his success, continue to improve and end up in the top 12 of his weight, but ultimately seeing Caldwell ranked at all would be an improvement. The former Iowa high school prep saw his name listed in the top 20 on a couple occasions this season and I think a realistic goal for this season would be to be ranked all season.

184 – Erik/Kyle Lux -The Lux brothers probably have the most experience on the team with Erik spending the most time at 184 between the two of them. Erik went 18-13 this season. His older brother Kyle went 6-8 at 184 and 7-10 overall. This weight will have significant drop off from the previous season as Loder was a top 15 wrestler in the nation his entire career, and now the torch will be passed to two relatively unproven wrestlers.

197 – Jared Bartel or Basil Minto – This is another weight where it appears there will be a battle for the starting spot. Minto had the starting spot for a majority of the season and he had two in season victories over Jared Bartel. Although Minto’s wins over Bartel were the only MAC wins he registered on the season and Schwab opted to go with the freshman from Mason City, Bartel. Minto put together a good season of fending off the highly ranked wrestlers from scoring bonus points. In matches against NCAA champion Cox of Missouri he lost 4-0 and 8-1, and against top ten opponent Travis Rutt of Oklahoma he held him to a 6-3 win. Unfortunately (or maybe it is fortunately) Schwab doesn’t go with the mentality of its okay to lose, as long as it’s not by bonus and went with Bartel. Bartel was able to accomplish something Minto was not and picked up a MAC win at the conference tournament. It will be interesting to see which wrestler claims the spot for the next season, but competition is always a good thing. With two quality options no wrestler ever has the opportunity to get comfortable. While I don’t think Schwab will pull his guy at the first sign of failure, that’s a bad thing, I think knowing that you need to bring your A game is a great way to motivate your wrestler.

HWT – Blaize Cabell – Cabell rounds out the lineup and is the 7th, possibly 8th (depending if Minto or Bartel wins 197) Iowa native in Doug Schwab’s lineup. Cabell also had a pretty good season for the Panthers, finishing 22-14 and placed 3rd at the MAC conference tournament which led to his first NCAA appearance. He drew some tough luck getting the #1 seed Tony Nelson in the first round, but he hung in there only to lose 1-0 to the eventual runner up. He lost his next match, but while he didn’t leave the NCAA tournament with a win, he left with some great experience going forward.

The good news for Cabell is that conference champion and All American Jeremy Johnson will be graduating from his conference, so Cabell will have an opportunity to move up. He could face some pressure from his own teammate, Cody Krumwiede, who was a top HWT recruit coming out of high school himself. Both Cabell and Krumwiede (who is also an Iowa native) took some lumps this year, but the potential is there for them to improve and be pretty good heavyweights. Also worth mentioning is #9 HWT recruit Adarios Jones out of Illinois will be joining the squad next season. Given Schwab has two talented guys ahead of him, there should be little worry that Jones won’t redshirt, but he could become a factor his first season he is eligible to compete.

Finally, if you would like you can go to Wrestle Stat and check out the eligibility breakdown for yourself. There was a new feature added to the site so if you would like to add other recruits I would encourage you to do so.